Comments (0)
Add to wishlist Delete from wishlist
Cite this document
Summary
A lot of research has been done on how teaching of a new language to students should be done. The following paper focuses on views presented by Aida Walqui and Jim Cummins on this topic. While Walqui focuses mainly on students immigrating to English-speaking countries, Cummins focuses more on English-language being learnt in non-English speaking countries…
Download full paper File format: .doc, available for editing
HIDE THIS PAPERGRAB THE BEST PAPER95% of users find it useful 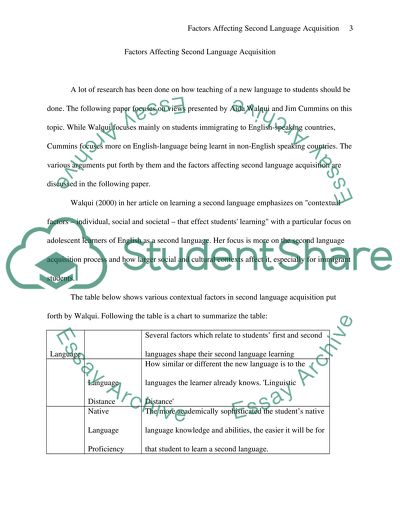 Running head: FACTORS AFFECTING SECOND LANGUAGE ACQUISITION Factors Affecting Second Language Acquisition By: GCU This paper presents the views of Aida Walqui and Jim Cummins on how should a second language be taught to students keeping in view the various social factors affecting it.
Factors Affecting Second Language Acquisition
A lot of research has been done on how teaching of a new language to students should be done. The following paper focuses on views presented by Aida Walqui and Jim Cummins on this topic. While Walqui focuses mainly on students immigrating to English-speaking countries, Cummins focuses more on English-language being learnt in non-English speaking countries. The various arguments put forth by them and the factors affecting second language acquisition are discussed in the following paper.
Walqui (2000) in her article on learning a second language emphasizes on "contextual factors - individual, social and societal - that effect students' learning" with a particular focus on adolescent learners of English as a second language. Her focus is more on the second language acquisition process and how larger social and cultural contexts affect it, especially for immigrant students.
The table below shows various contextual factors in second language acquisition put forth by Walqui. Following the table is a chart to summarize the table:
Language
Several factors which relate to students' first and second languages shape their second language learning
Language Distance
How similar or different the new language is to the languages the learner already knows. 'Linguistic Distance'
Native Language Proficiency
The more academically sophisticated the student's native language knowledge and abilities, the easier it will be for that student to learn a second language.
Knowledge of the Second Language
The extent and type of prior knowledge is an essential consideration.
Dialect and Register
acquiring speech patterns that may differ significantly from those they are familiar with
Language Status
The relative prestige of different languages and dialects and of the cultures and ethnic groups associated with them.
Language Attitudes
Learning a second language does not mean giving up one's first language or dialect. Rather, it involves adding a new language or dialect to one's repertoire.
The Learner
Students have diverse backgrounds and have diverse needs and goals.
Diverse Needs
Diverse background of students requires a different conception of curricula and a different approach to materials. Differentiation and individualization are not a luxury in this context: They are a necessity.
Diverse Goals
Learners' goals can vary from wholly integrative-the desire to assimilate and become a full member of the English-speaking world-to primarily instrumental-oriented toward specific goals such as academic or professional success (Gardner, 1989).
Peer Groups
In second language learning, peer pressure often undermines the goals set by parents and teachers.
Role Models
Students need to have positive and realistic role models who demonstrate the value of being proficient in more than one language.
Home Support
It is very important for parents to show support for and interest in their children's progress.
The Learning Process
Different students have different learning styles. Also intrinsic motivation aids learning and the quality of classroom interaction matters a lot.
Learning Styles
Some learners are more analytically oriented, some are globally oriented, some are visually oriented while some are more geared to sound.
Motivation
Learners should engage in various 'Intrinsically motivated activities' for their own sake because of their value, interest, and challenge.
Classroom Interaction
Learning is the result of opportunities for meaningful interaction with others in the target language. Instructional conversations and collaborative classroom work enhance this process.
Jim Cummins has written various works discussing 'bi-lingual education' with respect to various social factors like globalization, immigration and population mobility. He thinks that "Neo-fascist groups in a number of countries promote overtly racist policies in relation to immigrant and culturally diverse communities." (Cummins, par.3) They worry that linguistic, cultural, "racial" and religious diversity threaten the identity of the host society. On the other hand, more liberal groups in these countries advocate assimilation into the mainstream of society. However, these 'assimilationist' policies in education discourage students from maintaining their mother tongues. If students retain their culture and language, then they are viewed as less capable of identifying with the mainstream culture and learning the mainstream language of the society.
He thinks that it is a challenge for educators and policy-makers to respect the rights of all citizens (including school children), and the cultural, linguistic, and economic resources of the nation are maximized. He thus argues that 'bilingualism' has a positive effect on children's linguistic and educational development.
References
Cummins, J. (2003) Bilingual Children's Mother Tongue: Why Is It Important for Education i teach i learn.com Retrieved Jan 17, 2009, from http://www.iteachilearn.com/cummins/mother.htm
Walqui, A. (2000). Contextual Factors in Second Language Acquisition. ERIC Clearinghouses on Languages and Linguistics. Retrieved Jan 17, 2009 from http://www.cal.org/resources/Digest/0005contextual.html Read More
Share:
Tags
Cite this document
(“Second Language Acquisition Book Report/Review Example | Topics and Well Written Essays - 500 words”, n.d.)
Retrieved from https://studentshare.org/education/1516736-second-language-acquisition-book-reportreview

Intelligence: More than Genes or Exposure

Explain whether or not working towards gender equality is beneficial to all. You should include at least one sound-counterargument and refute it

Roles of Nurses in the Camps

When the business enterprise approaches a financial institution for obtaining the credit facilities, the enterprise is required to submit some important financial statements (profit and loss account, balance sheet etc.) and any further information relating to its activity. The financial statement of a company is prepared by qualified persons in terms of the relevant statutes. It may arise in anyone’s mind, that, when such is the case, is it not redundancy for another person to analyze the same. The answer to this is, financial statements are generally prepared to cater to the needs of the shareholders and/or the government. The relevant law mandates that the compilation/presentation of a financial statement is primarily focu...
11 Pages (2750 words) Report

... it as a decision making tool (Bott, 2008). Companies mainly invest, with the assumption that the investment will yield future income streams. Thus investment appraisal is assessing these income streams against the cost of investing (Ware, 1992). Management need to be extremely careful whilst making the decision since all investments that are made have an affect on the revenue of the company, hence management have to be very careful since these investments are generally very large and not easily reversible. 2. Types of Investment Appraisal: There are different techniques using which an investment can be financially justified. Methods to generate, review, analyze, select, and implement long-term investment proposals are listed below...
14 Pages (3500 words) Report

... hours at 03:00:00, no precipitation was recorded. During the same period, the hourly observation of the river stage generated an average height of 0.263 m or a theoretical discharge of 0.263 m(Bv). This theoretical discharge may also be expressed as 15.75 m3 per second. Figure 2: Elements of the River Cynon Hydrograph The average river discharge before the precipitation started is the baseflow of the River for this analysis. After about 8 hours of precipitation, with an average height of 0.5 mm of rainfall per hour, peak rainfall of 1.2 mm was recorded at 11:00:00 of October 13. After 10 hours, and an average precipitation of 0.56 mm per hour, a second rainfall peak, also at 1.2 m was recorded on 21:00:00 of October 13. From the first peak...
9 Pages (2250 words) Report

... mission and vision of the company. Beyond this, it also needs to review how its strategy formulation and strategy implementation had gotten separated in the last few years (Grant 2005, p. 187). Even with todays remaining six divisions (infrastructure, industrials, commercial finance, GE Money, health care and NBC-Universal), it still needs to trim down. In other words, G.E. needs to reformulate its strategy and decide once and for all that it is no longer viable to be a conglomerate. The days of empire are over and it is best to start selecting the core areas in which it can compete effectively by disposing of non-core assets and businesses. It is only now that G.E. has finally tried to go past the shadow of Jack Welch whose influence...
12 Pages (3000 words) Report
sponsored ads
Save Your Time for More Important Things
Let us write or edit the book report/review on your topic "Second Language Acquisition Book Report/Review" with a personal 20% discount.
GRAB THE BEST PAPER