Why I Want To Be a Layer - Admission/Application Essay Example

Comments (0)
Add to wishlistDelete from wishlist
Cite this document
Summary
The author states that realizing the immensity of the commitment to becoming a lawyer, the author further evaluated if this indeed is his/her destiny or just another one of his/her passing whims. Researching the rigors of studying in a law school only served to strengthen the author's resolve.  …
Download full paperFile format: .doc, available for editing
HIDE THIS PAPERGRAB THE BEST PAPER96.1% of users find it useful 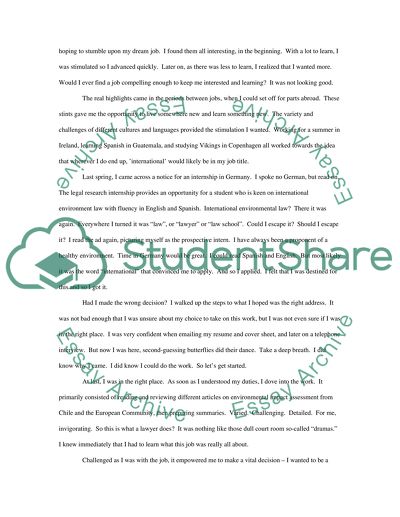 Extract of sample "Why I Want To Be a Layer"

“Why I Want To Be a Layer Admission/Application Essay”, n.d. https://studentshare.org/education/1514690-personal-statement-bachelor-essay.
Comments (0)
Click to create a comment or rate a document

CHECK THESE SAMPLES OF Why I Want To Be a Layer

...I Want a Dog al affiliation I Want a Dog What is the best thing to do if you are a single woman? To find a man? Certainly no.They cause too much troubles. But what about a friend who would love you despite anything? A friend who would never leave you and who would never betray you? A four-legged friend with wet nose and curious eyes? What about a dog? Your dog is a sample of loyalty. Your dog will never betray you and it will never leave you when you need somebody around. It will always do its best to cheer you up, it will always understand you even if nobody else around will, and of course, it may serve as a pillow if you want to have a lie-in in front of a TV. Your dog will never go out with other dogs (or what is worse, women) unless...
1 Pages(250 words)Essay

...THE LEGACY OF QUEEN ELIZABETH – I Proud and haughty, as although she knows she was born of such a mother, she nevertheless does not consider herself of inferior degree to the Queen, whom she equals in self-esteem; nor does she believe herself less legitimate than her Majesty, alleging in her own favor that her mother would never cohabit with the King unless by way of marriage, with the authority of the Church.... She prides herself on her father and glories in him; everybody saying that she also resembles him more than the Queen does and he therefore always liked her and had her brought up in the same way as the Queen. – Giovanni Michiel, Venetian Ambassador, spring 15571. Born on the 7th of September, 1533, and daughter of King Henry...
11 Pages(2750 words)Assignment

I Have a Dream: A Critical Discourse Analysis

... I Have a Dream: A Critical Dis Analysis Critical Dis Analysis is one the most effective tools in identifying certain crucial elements of language in terms of rhetorical presentation. This is regarded to be one of the most crucial identifiers of the very intricate matters that surround the language use in relation to the social conditions present in a certain society. In certain cases of history, there are several situations wherein rhetoric has played a very decisive factor in determining the political, social, economic and cultural conditions that greatly affected the turnout of events that affected the society on a larger scheme. In the context of American society, the black people or the African American minorities...
9 Pages(2250 words)Assignment

Ptolemy I Soter and His Relationship with Egypt

... Ptolemy I Soter and his Relationship with Egypt In ancient world, military men easily become rulers. This is because these men had developed skills over time such as administrative and leadership in the military. The grabbing of power in Egypt started when the Alexander the Great took power from the Persians. Alexander the Great had a strong army and the Persians could not beat it. Therefore, they peacefully surrender power to Alexander. During his tenure, Alexander demonstrated a high degree of reverence through offering sacrifice to the gods (Bosworth, 2002:15). He development agenda began with laying a plan to build the city of Alexandria. Further, he wanted to exercise his rule over a big territory. He had spread his campaigns...
8 Pages(2000 words)Assignment

I was mature for my age since everyone else was a bit older and so I also was independent and a bit grown-up compared to most kids my age. Most of my friends used to annoy me all the time during my adolescent years for acting so immaturely. My life as a child was a bundle of mischief and humor for the whole family. I remember a time many years back when my family and I went to a restaurant for lunch after fishing, and while waiting for our meals to be brought by the waitress, I took one of my crayons-I never left the house without them for some reason- and toss it to my brother Tommy who was seated opposite me. However, instead of hitting Tommy, the crayon flew past the side of his head and hit a man who was seated behind him at t...
7 Pages(1750 words)Personal Statement

... Oratorical Analysis of Martin Luther King Junior’s Speech, I Have a Dream Introduction Martin Luther’s speech had a widespread influential impact in the United States and the World at large. Luther’s oration was not only meant to stir the United States Congress, but also parliament to enact legislation promoting racial equality. The primary focus of Martin Luther was the United States; however, his dream of racial reconciliation and harmonious coexistence had a transcend appeal to all nations of the world shaken by public dissatisfaction. When Martin Luther King, Jr delivered the speech to demonstrate mass support for the civil rights legislation, he made a remarkable challenge to the United States that still echoes today. Speech...
11 Pages(2750 words)Assignment
sponsored ads
Save Your Time for More Important Things
Let us write or edit the admission/application essay on your topic "Why I Want To Be a Layer" with a personal 20% discount.
GRAB THE BEST PAPER

Let us find you another Admission/Application Essay on topic Why I Want To Be a Layer for FREE!