Comments (0)
Add to wishlistDelete from wishlist
Cite this document
Summary
The United Nations' International Covenant on Economic, Social, and Cultural Rights decreed that "higher education shall be made equally accessible to all, on the basis of capacity, by every appropriate means, and in particular by the progressive introduction of free education" (United Nations ICESCR Article 13)…
Download full paperFile format: .doc, available for editing
HIDE THIS PAPERGRAB THE BEST PAPER95.8% of users find it useful 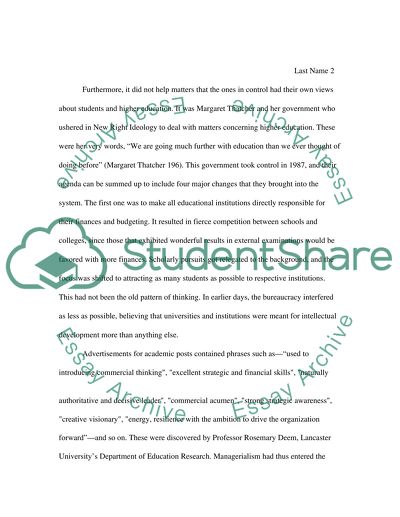 Download file to see previous pages The gap between both the social groups was around 30%, a figure on the higher side. Some reasons that have been cited for this trend include the inability to bear the overall expenses of studying for a higher university degree, the desire to earn money rather than study, and the feeling that good institutions and good jobs are closed doors for them.
Furthermore, it did not help matters that the ones in control had their own views about students and higher education. It was Margaret Thatcher and her government who ushered in New Right Ideology to deal with matters concerning higher education. These were her very words, "We are going much further with education than we ever thought of doing before" (Margaret Thatcher 196). This government took control in 1987, and their agenda can be summed up to include four major changes that they brought into the system. The first one was to make all educational institutions directly responsible for their finances and budgeting. It resulted in fierce competition between schools and colleges, since those that exhibited wonderful results in external examinations would be favored with more finances. Scholarly pursuits got relegated to the background, and the focus was shifted to attracting as many students as possible to respective institutions. This had not been the old pattern of thinking. In earlier days, the bureaucracy interfered as less as possible, believing that universities and institutions were meant for intellectual development more than anything else.
Advertisements for academic posts contained phrases such as-"used to introducing commercial thinking", "excellent strategic and financial skills", "naturally
authoritative and decisive leader", "commercial acumen", "strong strategic awareness",
"creative visionary", "energy, resilience with the ambition to drive the organization
forward"-and so on. These were discovered by Professor Rosemary Deem, Lancaster
University's Department of Education Research. Managerialism had thus entered the
field of education. The techniques, values and practices from the commercial sector
made an entry into the higher educational arena. Though these managers did strive
Last Name 1
towards excellence, they also tended to subject everything to minute scrutiny, resulting
in a lot of dissatisfaction all round.
Next on the agenda was governmental control over institutions offering higher
education. This could be termed as the Rationalist approach. Funds would not be
allocated to whoever asked for them; the government would take up "rationing of
funding". Furthermore, a national curriculum would be prepared and this had to be
followed diligently. Based on how well the teachers delivered that curriculum to
the students, the institution would receive its share of finances for its functioning. There
were also detailed directives given as to how the curriculum was to be delivered. And no
one was allowed to take liberties with it, considering that government-appointed
inspectors would be making their rounds. Their final reports carried a lot of value, for
higher education could not be ...Download file to see next pagesRead More
Share:
Tags
Cite this document
(“Widening Participation In Higher Education Policy Essay”, n.d.)
Widening Participation In Higher Education Policy Essay. Retrieved from https://studentshare.org/education/1513177-widening-participation-in-higher-education-policy

CHECK THESE SAMPLES OF Widening Participation In Higher Education Policy

transferring knowledge, skills and cultural values to the students, higher education teachers are indirectly keeping young and unemployed individuals off the streets (Stephens & Leach, 1998, p. 203). In general, each of the school teacher(s) have different set of multiple roles which they need to satisfy on a daily basis. Because of their unique function within an educational institution, functionalists may sometimes conclude that the presence of certain school policies and institutions can be dysfunctional for most of the teachers within a given educational institution. As explained by Appelrouth and Edles (2008, p. 386), the occurrence of dysfunctionality is possible because “they are functional for a more powerful social group...
4 Pages(1000 words)Essay

Unfortunately, within the confines of a probationary period at colleges or universities, the institutions can choose not to renew faculty contracts and terminate faculty without any reason or cause because they are classed as at will employees. Throughout the probationary period, senior professors and administrators evaluate the work of new faculty-teaching, research and service before deciding whether or not to recommend tenure. This would be managed by having the students fill out a questionnaire at the end of the year to let the administrators and senior professors know how a particular instructor taught that year what are the strengths and weaknesses in a particular area. The administrators do not only focus on what the stu...
14 Pages(3500 words)Essay

... people in the course of my college life, and I have strived to learn as much as I can from them, just as they do from me. In addition, I have been privileged to interact with students from other faculties, joined student organizations and participated in debates and discussions. This has assisted me in learning interpersonal skills; which is one of the most significant skills that I make use every day of my life. I have been able to make dear friends as well as developed interpersonal relationships that are mature; in the process enriching my academic life as well as making it more interesting. Finally, I can conclude by noting that higher education has been radically diversified in the mode of delivery or rather instruction media...
2 Pages(500 words)Essay

...Management Theory and Practice in the early childhood education industry This Report applies management theory into practice in the early childhood industry, especially in the context of women leaders. Management issues play a significant role in the academic sector, because early childhood professionals need higher levels of motivation in order to avoid burnout . As pointed out in a study by Osgood and Halsall (2007) where they carried out research to examine the position of women in leadership or management positions, a “glass ceiling” exists for women in the academic setting, which could significantly impair motivation. Since many of the individuals employed in the early education sector are women, addressing this issue is even more...
6 Pages(1500 words)Coursework
sponsored ads
Save Your Time for More Important Things
Let us write or edit the essay on your topic "Widening Participation In Higher Education Policy" with a personal 20% discount.
GRAB THE BEST PAPER

Let us find you another Essay on topic Widening Participation In Higher Education Policy for FREE!