Comments (0)
Add to wishlistDelete from wishlist
Cite this document
Summary
In that we are contemplating a honeymoon period speaks to the positive realm that we do share a number of things in common. Of course our common bond in this relationship is our love, and knowledge for the Social Sciences, and the teaching thereof…
Download full paperFile format: .doc, available for editing
HIDE THIS PAPERGRAB THE BEST PAPER97.2% of users find it useful 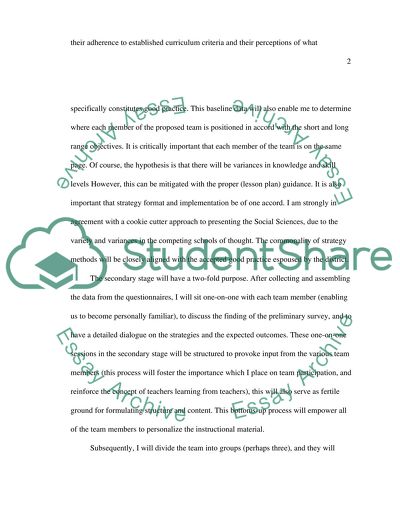 1 School District New Leaders In that we are contemplating a honeymoon period speaks to the positive realm that we do sharea number of things in common. Of course our common bond in this

relationship is our love, and knowledge for the Social Sciences, and the teaching thereof.

partners love, based on how they react to the stimuli, coupled with the types and quality

of actions which our partners initiate towards us.

Having said that, this is precisely what I will be attempting to do during the initial

introduction and transitional period. Of course, we all have the same objective; which

will be to avail all of the children whom we teach, with a quality education. Based on this

premise, it is my contention that, it will be critical to our short and long term relationship

for me to establish two very important things at the outset. I must have some baseline

data on all of the individuals who will be members of my team. Aside from their resumes

and personnel files, therefore, during the honeymoon period, I must get to know the

strengths and weaknesses of every individual who will be placed on the team.

Considering the number of individuals whom I must get to know, which will

enable me to make a quality assessment, I am prone to pursue this in four stages--I have

chosen to label these stages as, primary, secondary, planning and formulation.

The primary stage will be implemented in the immediate, as I will prepare a formal

questionnaire for each team member to accomplish. This tool will make known and

establish the knowledge, skills, and strategies of each team member. This data will reflect

their adherence to established curriculum criteria and their perceptions of what


specifically constitutes good practice. This baseline data will also enable me to determine

range objectives. It is critically important that each member of the team is on the same

page. Of course, the hypothesis is that there will be variances in knowledge and skill

levels However, this can be mitigated with the proper (lesson plan) guidance. It is also

important that strategy format and implementation be of one accord. I am strongly in

agreement with a cookie cutter approach to presenting the Social Sciences, due to the

variety and variances in the competing schools of thought. The commonality of strategy

methods will be closely aligned with the accepted good practice espoused by the district.

The secondary stage will have a two-fold purpose. After collecting and assembling

the data from the questionnaires, I will sit one-on-one with each team member (enabling

us to become personally familiar), to discuss the finding of the preliminary survey, and to

have a detailed dialogue on the strategies and the expected outcomes. These one-on-one

members (this process will foster the importance which I place on team participation, and

reinforce the concept of teachers learning from teachers), this will also serve as fertile

ground for formulating structure and content. This bottoms-up process will empower all

of the team members to personalize the instructional material.

Subsequently, I will divide the team into groups (perhaps three), and they will

information collected in the primary and secondary stage. In the planning stage the three


information. They will then produce lesson plans. After accomplishing this planning task,

we will then meet as one team, with three documents. We will scrutinize these documents

step by step, point by point, using the district approved curriculum and the precept of

good practice as guidelines, we will on the basis of consensus, formulate a lesson plan,

...? Canton School District Introduction One of the greatest challenges in building high performance teams in an is getting the members to cooperate in the various projects assigned to them. Working in teams calls for all the members to engage their highest level of competence at work and endurance to obey the authority. It follows that the groups formed should select leaders in different tasks. Roles should be assumed without complaining. Another common obstacle to group work is breakdowns in communication. Some communication avenues can be ineffective, depending on how they are applied. It is also possible that some or all of the group members could have poor communication skills; thus making the efficiency of the team poor. Canton City...
8 Pages(2000 words)Term Paper

... A Brave New World 26 February Introduction Man has always wondered since time immemorial about his ultimate place in the big universe. He had attempted to find meaning in this scheme of things without much success. A key repeated theme is seeming failure to find that true meaning that will justify his existence. What usually happens is that the more Man goes deeper into the search for ultimate meaning, the more he finds nothing. This is confounding, to say the least, and goes to show how useless the search could be. Many people had been doing this search several times and came up with nothing. Out of this seeming hopelessness and uselessness came the philosophical idea of the absurd – that Mans search for individual meaning is bound...
8 Pages(2000 words)Term Paper
sponsored ads
Save Your Time for More Important Things
Let us write or edit the essay on your topic "School district new leaders" with a personal 20% discount.
GRAB THE BEST PAPER

Let us find you another Essay on topic School district new leaders for FREE!