Comments (0)
Add to wishlistDelete from wishlist
Cite this document
Summary
Constitutive ethnography merits a "first person" perspective because of its inherent subjectivity and bias to a certain group, hence the first person perspective should have been used. Furthermore, the study is focused on pharmacists, it should have provided more insight into their character and professional culture to allow readers to understand their values and situate where their views within the results…
Download full paperFile format: .doc, available for editing
HIDE THIS PAPERGRAB THE BEST PAPER97.9% of users find it useful 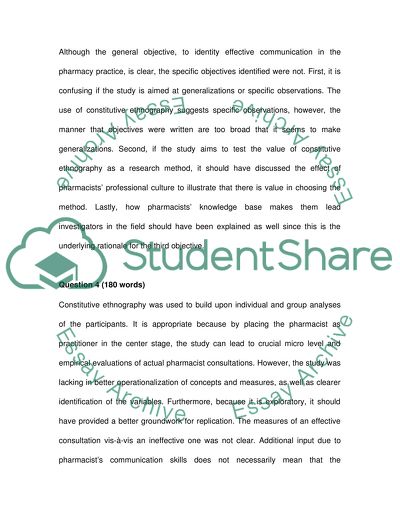 Download file to see previous pages Second, no other methods were used aside from videotape analysis, which should have been done to triangulate the results of constitutive methodology. Lastly, the 30 hours of tape taken from each participant is not enough because constitutive ethnography's authority is based primarily on the length of time spent studying the subjects.
Although the general objective, to identity effective communication in the pharmacy practice, is clear, the specific objectives identified were not. First, it is confusing if the study is aimed at generalizations or specific observations. The use of constitutive ethnography suggests specific observations, however, the manner that objectives were written are too broad that it seems to make generalizations. Second, if the study aims to test the value of constitutive ethnography as a research method, it should have discussed the effect of pharmacists' professional culture to illustrate that there is value in choosing the method. Lastly, how pharmacists' knowledge base makes them lead investigators in the field should have been explained as well since this is the underlying rationale for the third objective.
Constitutive ethnography was used to build upon individual an...
However, the study was lacking in better operationalization of concepts and measures, as well as clearer identification of the variables. Furthermore, because it is exploratory, it should have provided a better groundwork for replication. The measures of an effective consultation vis--vis an ineffective one was not clear. Additional input due to pharmacist's communication skills does not necessarily mean that the consultation was effective within the context of effective healthcare. Moreover, even if such definition is considered effective, pharmacists should have identified concrete criteria on how to distinguish input as a result of effective communication skills vis--vis others. Lastly, neglect of patient's evaluations is cause for alarm. Although this was noted as a limitation of the study, researchers could have at least conducted a focus group on the view of patients to provide more insight into pharmacist-patient communication.
Question 5 (108 words)
The following results were presented: (1) categories and sub-categories of effective communication skills; (2) instances of effective and ineffective communication and skills usage in each; and (3) types of consultations. All were presented through the use of tables, qualified by brief explanations. However, since constitutive ethnography was the methodology used, these results are incomplete. Insights into the manner that the pharmacists evaluated themselves and the manner that their professional culture as affected the identified results should have been included. As stated in the objectives, it aims to assess whether participative research is effective in analyzing the topic, thus, their effect on the results should have been given consideration.
Question 6 (147 ...Download file to see next pagesRead More
Share:
Tags
Cite this document
(“Research methods coursework Proposal Example | Topics and Well Written Essays - 1000 words”, n.d.)
Research methods coursework Proposal Example | Topics and Well Written Essays - 1000 words. Retrieved from https://studentshare.org/education/1503138-research-methods-coursework

...Research Methods Data Task Hypothesis: Science tend to be lazier than the other in the Methodology: Since the entire research is based on two sets of students, they can be differentiated between one another. Only inferential methods can be employed for the purpose. This hypothesis relates 'laziness' with the science students. Students can be science or otherwise. Therefore, it is a nominal measure. Variables for the purpose are Students course and mode of transport is a measure of laziness. An intervening variable of work pressure is also possible in this case. While the student's course is an independent variable the mode of transport used is a dependent variable. It is possibly influenced by the intervening variable as well. Unit...
5 Pages(1250 words)Essay

...Research Methods in Business and Management 2009 Research Methods in Business and Management Introduction The most common ification splits the methods used in organisational and business research into two large groups, namely quantitative and qualitative research methods. Quantitative methodology incorporates methods that have been designed to facilitate research in the field of natural (physical) sciences. Therefore, the main mission of quantitative research is to ensure validity and reliability of study results (Dingwall et al, 1998). Examples of quantitative methods widely used in the social sciences and business and management research are survey methods, formal methods (e.g. econometrics), laboratory experiments and several numerical...
8 Pages(2000 words)Essay

13 Pages(3250 words)Assignment
sponsored ads
Save Your Time for More Important Things
Let us write or edit the research proposal on your topic "Research methods coursework" with a personal 20% discount.
GRAB THE BEST PAPER

Let us find you another Research Proposal on topic Research methods coursework for FREE!