Comments (0)
Add to wishlistDelete from wishlist
Cite this document
Summary
The essay “Does Multicultural Education Benefit Students?”  leads a lot of arguments in favor of this phenomenon in academic education. Multi-culture cultivates tolerance in pupils, enriches their personal knowledge, prepares them for future interaction with other cultures in the business.
…
Download full paperFile format: .doc, available for editing
HIDE THIS PAPERGRAB THE BEST PAPER93% of users find it useful 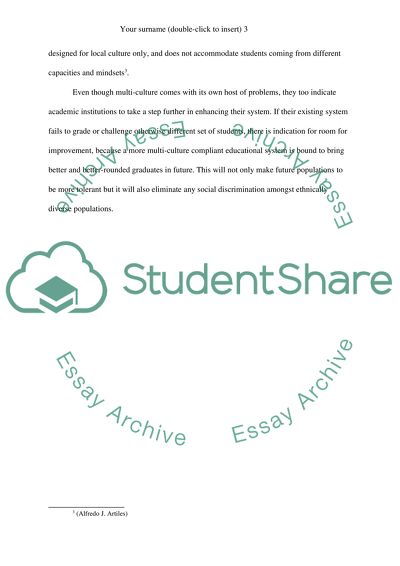 ﻿Does MultiCulture Benefit Students?
Multiculturalism is a theory that encourages the interest in many cultures within a society rather than in only a mainstream culture1. Multi-culture happens due to the existence of ethnic differences among people in a group. When we discuss about academic schools, multi-culture occurs when a class or a group of students hold ethnic differences between each other. These are individual differences in students that come from their family backgrounds, home-country culture, language, religious beliefs, race, and lifestyle.
In my opinion, multi-culture in a classroom delivers more benefits than troubles, during the course of study and various academic activities. It makes students more stable and tolerant personalities than those who are only exposed to only one culture. Since individual students come from different backgrounds, they introduce various mindsets. Each student comes with their own set of priorities and qualities that encourage creativity. Also it helps students to develop socially strong when they are exposed to different personalities and cultural values. They tend to develop acceptance for different people and also appreciate those qualities that may not exist in their own culture. This is turn becomes a crucial advantage when they are interacting outside country, or working in an organization that celebrates diversity in employees.
However, as much the multi-culture brings advantages, it becomes more demanding for school administrations and difficult to meet expectations at home2. The individual student cultural differences at times are so great that at times special treatment is given to such students. They are sent to special educational programs that generally have very different standards than the mainstream schools, hence further elevating student differences. In some cases, students are unable to perform well in schools because education curriculum/system is designed for local culture only, and does not accommodate students coming from different capacities and mindsets3.
Even though multi-culture comes with its own host of problems, they too indicate academic institutions to take a step further in enhancing their system. If their existing system fails to grade or challenge otherwise different set of students, there is indication for room for improvement, because a more multi-culture compliant educational system is bound to bring better and better-rounded graduates in future. This will not only make future populations to be more tolerant but it will also eliminate any social discrimination amongst ethnically diverse populations.
Bibliography
Alfredo J. Artiles, John D. Palmer, Stanley C. Trent. "Culturally Diverse Students In Special Education." Research on Multicultural Education 2004.
Farlex. The Free Dictionary. .
Heckmann, Friedrich. "MultiCulturalism Defined Seven Ways." The Social Contract (n.d.).
Ying-yi Hong, Michael W. Morris, Chi-yue Chiu, Ver6nica Benet-Martfnez. "MultiCultural Minds: A Dynamic Constructivist Approach to Culture and Cognition." Science Watch - The American Psychological Association July 2000. Read More
Share:
Tags
Cite this document
(“Does Multicultural Education Benefit Students Essay”, n.d.)
Does Multicultural Education Benefit Students Essay. Retrieved from https://studentshare.org/education/1501244-multicultural-education-college-essay

CHECK THESE SAMPLES OF Does Multicultural Education Benefit Students

.... These are the results by the N.I.E Study that interschool academic competition does indeed tend to decrease school violence. This finding is very much relevant to the lingering private/public debate. But this also poses a hindrance in modern day teaching approaches in regards to academics. Schools and educators prefer not to induce competition into students but rather healthy, co-operative learning atmospheres. Ironically enough, it is the private schools which have argued that the older system of competition amongst students in education is useful indeed. Another finding of the N.I.E is that schools which are larger “tend to experience more violence and vandalism than smaller ones.” (West)The reason for this may be that private schools...
6 Pages(1500 words)Research Proposal

...The term HYBRID warfare is increasingly used to describe current and future conflict; what is it and what challenges does it present? The end of theCold War and the events of 9/11 have provided a catalyst for unprecedented challenges to the international order and national security policy. Arguably the most important challenge has been the appropriate and most efficacious method to combat a transient and intangible enemy, which transcends borders and the conventional notion of an organised army that “yet has shown a remarkable resilience against traditional military firepower”1. Moreover, Mahmood’s observations highlight the changing nature of conflict and the fact that the contemporary international framework has removed pre-existing...
7 Pages(1750 words)Article
sponsored ads
Save Your Time for More Important Things
Let us write or edit the essay on your topic "Does Multicultural Education Benefit Students" with a personal 20% discount.
GRAB THE BEST PAPER

Let us find you another Essay on topic Does Multicultural Education Benefit Students for FREE!