Theory related to practice/what is a communicative pedagogy - Essay Example

Comments (0)
Add to wishlistDelete from wishlist
Cite this document
Summary
Name Tutor Course Date This essay seeks to illustrate and expound on the communicative approach as the current progressive approach to second language learning. It can be evaluated on the platform of what it delivers and the manner with which it delivers second language teaching in the following aspects of language; nonnative and native speaking paradigms…
Download full paperFile format: .doc, available for editing
HIDE THIS PAPERGRAB THE BEST PAPER91.5% of users find it useful 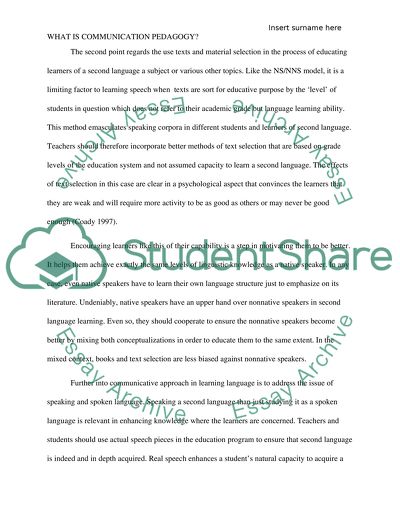 Download file to see previous pages It is argued that the model of NNS and NS is limiting to language by undermining the capacity of students to a language and placing them as those who can never level up to the standards of that given language where they are placed as NNS.The progressive approach emphasis on NS as the only model to teach language is indeed constraining to other students of speech that are second learners. It is possible according to scholars such as Prodromou 1997 to incorporate learning into both NNS/NS structure as a mixed method of delivering speech learning in order to aid improvement among students that are nonnative English speakers. The second point regards the use texts and material selection in the process of educating learners of a second language a subject or various other topics. Like the NS/NNS model, it is a limiting factor to learning speech when texts are sort for educative purpose by the ‘level’ of students in question which does not refer to their academic grade but language learning ability. This method emasculates speaking corpora in different students and learners of second language. Teachers should therefore incorporate better methods of text selection that are based on grade levels of the education system and not assumed capacity to learn a second language. The effects of text selection in this case are clear in a psychological aspect that convinces the learners that they are weak and will require more activity to be as good as others or may never be good enough (Coady 1997). Encouraging learners like this of their capability is a step in motivating them to be better. It helps them achieve exactly the same levels of linguistic knowledge as a native speaker. In any case, even native speakers have to learn their own language structure just to emphasize on its literature. Undeniably, native speakers have an upper hand over nonnative speakers in second language learning. Even so, they should cooperate to ensure the nonnative speakers become better by mixing both conceptualizations in order to educate them to the same extent. In the mixed context, books and text selection are less biased against nonnative speakers. Further into communicative approach in learning language is to address the issue of speaking and spoken language. Speaking a second language than just studying it as a spoken language is relevant in enhancing knowledge where the learners are concerned. Teachers and students should use actual speech pieces in the education program to ensure that second language is indeed and in depth acquired. Real speech enhances a student’s natural capacity to acquire a certain additional language apart from which a second language cannot be acquired comprehensively. Students should also be examined on their spoken language output in order to create evaluation of the material they obtain and the extent to which it is obtain within certain periods of time provided by the educator. Education should also be enhanced through Discourse Completion Tasks that enable the student too understand widely use of various speech and patterns in the situations given. The discourse may as well be used accordingly with consideration of the learner’s use of knowledge and experience previously. DCT is an important aspect of spoken ...Download file to see next pagesRead More
Share:
Tags
Cite this document
(“Theory related to practice/what is a communicative pedagogy Essay”, n.d.)
Theory related to practice/what is a communicative pedagogy Essay. Retrieved from https://studentshare.org/education/1472523-theory-related-to-practice-what-is-a-communicative
(Theory Related to practice/What Is a Communicative Pedagogy Essay)
Theory Related to practice/What Is a Communicative Pedagogy Essay. https://studentshare.org/education/1472523-theory-related-to-practice-what-is-a-communicative.
“Theory Related to practice/What Is a Communicative Pedagogy Essay”, n.d. https://studentshare.org/education/1472523-theory-related-to-practice-what-is-a-communicative.
Comments (0)
Click to create a comment or rate a document

...Management Theory and Practice in the early childhood education industry This Report applies management theory into practice in the early childhood industry, especially in the context of women leaders. Management issues play a significant role in the academic sector, because early childhood professionals need higher levels of motivation in order to avoid burnout . As pointed out in a study by Osgood and Halsall (2007) where they carried out research to examine the position of women in leadership or management positions, a “glass ceiling” exists for women in the academic setting, which could significantly impair motivation. Since many of the individuals employed in the early education sector are women, addressing this issue is even more...
6 Pages(1500 words)Coursework
sponsored ads
Save Your Time for More Important Things
Let us write or edit the essay on your topic "Theory related to practice/what is a communicative pedagogy" with a personal 20% discount.
GRAB THE BEST PAPER

Let us find you another Essay on topic Theory related to practice/what is a communicative pedagogy for FREE!