Comments (1)
Add to wishlistDelete from wishlist
Cite this document
Summary
This paper "Learning of Languages" presents the performance, perfection and the speed of Spanish children within the age bracket 8-13 years who are aspiring to learn the English language as their second language and also how children adapt cognates as compared to noncognates…
Download full paperFile format: .doc, available for editing
HIDE THIS PAPERGRAB THE BEST PAPER92.5% of users find it useful 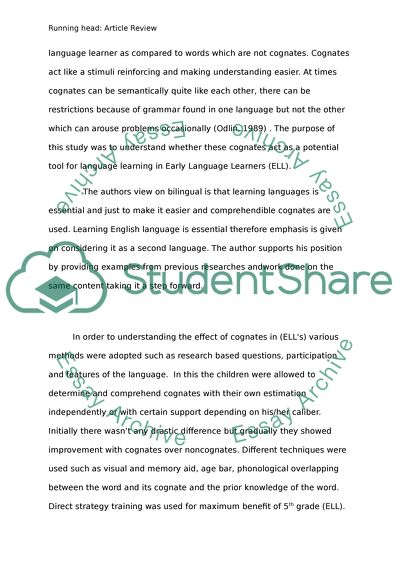 Extract of sample "Learning of Languages"

Download file to see previous pages There are also certain cognates which have the same meaning but not the same form. Cognates are easy to comprehend as an individual has a very vague idea about it and can join the dots in order to make a complete picture. "When two languages are close, learners will have access to a large number of cognate words" (Ellis, 1999). A lot of researches in the past are based on cognates and how easily one can understand them as a new language learner as compared to words which are not cognates. Cognates act like a stimuli reinforcing and making understanding easier. At times cognates can be semantically quite like each other, there can be restrictions because of grammar found in one language but not the other which can arouse problems occasionally (Odlin, 1989). The purpose of this study was to understand whether these cognates act as a potential tool for language learning in Early Language Learners (ELL).

The authors view on bilingual is that learning languages is essential and just to make it easier and comprehendible cognates are used. Learning the English language is essential therefore emphasis is given on considering it as a second language. The author supports his position by providing examples from previous researches any work done on the same content taking it a step forward.

In order to understand the effect of cognates in (ELL's), various methods were adopted such as research-based questions, participation, and features of the language. In this, the children were allowed to determine and comprehend cognates with their own estimation independently or with certain support depending on his/her caliber. Initially, there wasn’t any drastic difference but gradually they showed improvement with cognates over noncognates. Different techniques were used such as visual and memory aid, age bar, phonological overlapping between the word and its cognate and the prior knowledge of the word. Direct strategy training was used for the maximum benefit of 5th grade (ELL).

Receptive and expressive help to develop proficiency in the language as well as the pathology of speech and language. Although there wasn’t any study that targeted the cognate status of language which is developing. It was observed that on cognate language of English the bilinguals performed better than the monolinguals but when it came to noncognates both were equal in performance. Statistics were used in order to show the cognate and noncognate items. It was deduced that Spanish students who were ELL did not merely benefit from L1 or L2 on test which was based on receptive vocabulary.

da
danielrocio added comment 10 months ago
Student rated this paper as
This article was always my weak point. I could never finish it on time. Still, after I found this precise essay, I understood how it should be done. So, I performed my research afterward and completed the article in several hours, instead of weeks as it was previously.

CHECK THESE SAMPLES OF Learning of Languages

An organization can go through a structural change. This can be due to a takeover or a complete change of management. In this type of change, the way of working and many dimensions of business activity is altered. This move is usually towards modernization and staying up with the pace but is too fast and sudden, and thus hard for the stakeholders to adjust with. Then there is a change brought about by the change in the services or goods produced and provided. This is usually a positive ch...
6 Pages(1500 words)Article
sponsored ads
Save Your Time for More Important Things
Let us write or edit the article on your topic "Learning of Languages" with a personal 20% discount.
GRAB THE BEST PAPER

Let us find you another Article on topic Learning of Languages for FREE!