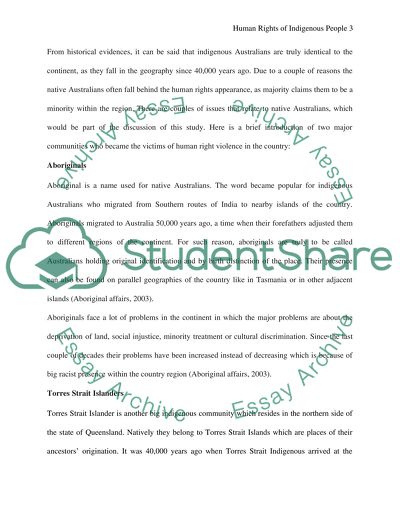 Download file to see previous pages The position, land and demographics of any particular state decide the spectrum of rights for the people of that particular region (Council of Europe, 2011). From past studies, it can be said that human rights are those associated with people living in a cross-cultural or multi-cultural spectrum. A cross cultural spectrum is the one which could comprise people of different identities like indigenous people. Category of indigenous people is one major category within a multi-cultural system, in which human rights fall at the highest human distinction (An-Na'im, 1995). Talking about Australia, a country of 22 million human population holds a diversified multi cultural system. People who belong to different cultures, casts or identities reside in such cross-cultural country. There are partially several indigenous groups that dwell in different districts of the country. Human rights of indigenous people in Australia are always under the question. This is because of avoidance and negligence given by the government officials in the indigenous section. Concerning Australia, there are mainly two indigenous communities (aboriginal and Torres Strait Islander) which are always on the discussion (Kinley, 1998). This is because of their consistent proclaims that government ignores their fundamental native rights in the region (Eniar, 1999). From historical evidences, it can be said that indigenous Australians are truly identical to the continent, as they fall in the geography since 40,000 years ago. Due to a couple of reasons the native Australians often fall behind the human rights appearance, as majority claims them to be a minority within the region. There are couples of issues that relate to native Australians, which would be part of the discussion of this study. Here is a brief introduction of two major communities who became the victims of human right violence in the country: Aboriginals Aboriginal is a name used for native Australians. The word became popular for indigenous Australians who migrated from Southern routes of India to nearby islands of the country. Aboriginals migrated to Australia 50,000 years ago, a time when their forefathers adjusted them to different regions of the continent. For such reason, aboriginals are truly to be called Australians holding original identification and by birth distinction of the place. Their presence can also be found on parallel geographies of the country like in Tasmania or in other adjacent islands (Aboriginal affairs, 2003). Aboriginals face a lot of problems in the continent in which the major problems are about the deprivation of land, social injustice, minority treatment or cultural discrimination. Since the last couple of decades their problems have been increased instead of decreasing which is because of big racist presence within the country region (Aboriginal affairs, 2003). Torres Strait Islanders Torres Strait Islander is another big indigenous community which resides in the northern side of the state of Queensland. Natively they belong to Torres Strait Islands which are places of their ancestors’ origination. It was 40,000 years ago when Torres Strait Indigenous arrived at the continent. It was their expected best place of reside, holding a natural identify of their forefathers’ attribution (Heritage Division, 2010). Torres Strait Islanders are natively true Australians, which according to racist’s communities is not a sufficient factor that can give them their ...Download file to see next pagesRead More
Share:
Tags
Cite this document
(“Issues that affect human rights of a group of Indigenous people Essay”, n.d.)
Issues that affect human rights of a group of Indigenous people Essay. Retrieved from https://studentshare.org/education/1456891-select-an-issue-that-affects-the-human-rights-of-a
(Issues That Affect Human Rights of a Group of Indigenous People Essay)
Issues That Affect Human Rights of a Group of Indigenous People Essay. https://studentshare.org/education/1456891-select-an-issue-that-affects-the-human-rights-of-a.
“Issues That Affect Human Rights of a Group of Indigenous People Essay”, n.d. https://studentshare.org/education/1456891-select-an-issue-that-affects-the-human-rights-of-a.
Comments (0)
Click to create a comment or rate a document

... have done on FN 13case, Article 16 of the UDHR was invoked, which states that integrity of a person‘s family and family life is a basic human right.23 In Sandra Lovelace v Canada it was held by the Human Rights Committee that any attempt at preventing her recognition as a member of the band, constituted an unwarrantable denial of the rights granted to her by Article 27 of the Covenant24. In the East Timor case, the ICJ opined that the people of East Timor were entitled to self determination25. In the Western Sahara Advisory Option, the ICJ held the construction of the wall and the subsequent restrictive measures, had severely affected the freedom of movement of those living in the Occupied Palestinian Territory. This constituted...
8 Pages(2000 words)Case Study
sponsored ads
Save Your Time for More Important Things
Let us write or edit the essay on your topic "Issues that affect human rights of a group of Indigenous people" with a personal 20% discount.
GRAB THE BEST PAPER

Let us find you another Essay on topic Issues that affect human rights of a group of Indigenous people for FREE!