Comments (0)
Add to wishlistDelete from wishlist
Cite this document
Summary
Master of Business Administration: An Essential Tool to Propel One’s Career Full name University name Education as it has always been known, is important especially in the modern world where competitions have gone global. Information, knowledge and intelligence are now insufficient to give an individual the edge over others but needs documents to prove one’s claims as well as the necessary trainings from a reputable school…
Download full paperFile format: .doc, available for editing
HIDE THIS PAPERGRAB THE BEST PAPER95.8% of users find it useful 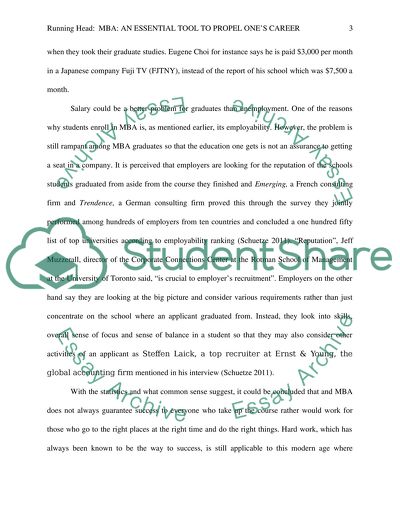 Download file to see previous pages For the employed, going back to school has various reasons like wanting a raise in salary, a promotion, application to a bigger company or it could also be a means to avoid dismissal from service. Most people who are taking postgraduate studies choose to enroll in Master of Business Administration Program because of the demand for its graduates. In addition, students want to be employed with higher salaries after getting a Masters degree. However, statistics show that such expectations are quite the contrary to many although could be true to a handful. Anne VanderMey (2009) claims that schools usually show prospective careers after MBA with the expected salaries to match. However, she mentioned that new statistics shown by PayScale proves this to be far from real to most graduates where only a few get the $150,000 gross annual income mark and most are able to produce the five digit mark only with the worst scenario of a graduate having $30,000 for a year. With the results of the statistical study however, schools say the information they have, prove graduates having higher salaries and the problem is pointed out to the manner PayScale gathers its information. Nevertheless, individuals have been interviewed and are quoted by VanderMey to prove that they are paid much lower than what they expected when they took their graduate studies. Eugene Choi for instance says he is paid $3,000 per month in a Japanese company Fuji TV (FJTNY), instead of the report of his school which was $7,500 a month. Salary could be a better problem for graduates than unemployment. One of the reasons why students enroll in MBA is, as mentioned earlier, its employability. However, the problem is still rampant among MBA graduates so that the education one gets is not an assurance to getting a seat in a company. It is perceived that employers are looking for the reputation of the schools students graduated from aside from the course they finished and Emerging, a French consulting firm and Trendence, a German consulting firm proved this through the survey they jointly performed among hundreds of employers from ten countries and concluded a one hundred fifty list of top universities according to employability ranking (Schuetze 2011). “Reputation”, Jeff Muzzerall, director of the Corporate Connections Center at the Rotman School of Management at the University of Toronto said, “is crucial to employer’s recruitment”. Employers on the other hand say they are looking at the big picture and consider various requirements rather than just concentrate on the school where an applicant graduated from. Instead, they look into skills, overall sense of focus and sense of balance in a student so that they may also consider other activities of an applicant as Steffen Laick, a top recruiter at Ernst & Young, the global accounting firm mentioned in his interview (Schuetze 2011). With the statistics and what common sense suggest, it could be concluded that and MBA does not always guarantee success to everyone who take up the course rather would work for those who go to the right places at the right time and do the right things. Hard work, which has always been known to be the way to success, is still applicable to this modern age where education and skills are highly sought for. Education can never be a guarantee for those who want to take on an easy life ...Download file to see next pagesRead More
Share:
Tags
Cite this document
(“MDA: an essential tool to propel one's career Essay”, n.d.)
Retrieved from https://studentshare.org/education/1442359-the-decision-to-get-an-mba-and-the-reason-why-i
(MDA: an Essential Tool to Propel one'S Career Essay)
https://studentshare.org/education/1442359-the-decision-to-get-an-mba-and-the-reason-why-i.
“MDA: an Essential Tool to Propel one'S Career Essay”, n.d. https://studentshare.org/education/1442359-the-decision-to-get-an-mba-and-the-reason-why-i.
Comments (0)
Click to create a comment or rate a document

CHECK THESE SAMPLES OF MDA: an essential tool to propel one's career

The practical implications are for more progressive career learning, in conditions that enable the due process to establish viable bases for both choice and change of mind. This thinking more sharply differentiates career education from guidance, setting out a strong rationale for the former. It does not replace DOTS but extends it into a new-DOTS re-conceptualization termed career-learning space. The effectiveness of career learning is determined by its transferable outcomes. New-DOTS thinking resonates with the conditions for transferable learning. There are possibilities here for building a strong consensus between practice, theory, and policy.
It helps us in exploring our strengths and can identify the areas we really wan...
9 Pages(2250 words)Assignment

The podocytes “form a tight interdigitating network of foot processes (pedicels)”(Wikipedia, 2008). This helps to control protein filtration from the capillary lumen into the Bowman’s space. The intraglomerular mesangial cells, which are specialized pericytes, are present in the interstitium between glomerular endothelial cells (Wikipedia, 2008). The efferent arteriole carries blood out of the glomerulus. Juxtaglomerular cells are specialized smooth muscle cells, which are present in the walls of the afferent arteriole (Wikipedia, 2008.)
Portal tracts are “islands of connective tissue,” (Rubin, 2008), which contains branches of the portal vein and hepatic artery. These run alongside each other an...
9 Pages(2250 words)Assignment

In 1918, William Faulkner attempted to become a pilot for the U.S. Army but was turned down because of his height. He “never stood taller than five feet, six inches tall” (Padgett 1). He never gave up and traveled to Toronto, Canada where he posed as an English national and was admitted to the Royal Canadian Air Force (EGS 2). He then traveled to France with this force, though, when they reached France, the war had ended. (EGS 3)
From 1919 until 1921, after returning to the U.S, William Faulkner attended the University of Mississippi, where he wrote for the school’s newspaper, as well as his hometown’s newspaper. (EGS 3).He also drafted his first play that was presented by the university’s drama...
7 Pages(1750 words)Literature review
sponsored ads
Save Your Time for More Important Things
Let us write or edit the essay on your topic "MDA: an essential tool to propel one's career" with a personal 20% discount.
GRAB THE BEST PAPER

Let us find you another Essay on topic MDA: an essential tool to propel one's career for FREE!