Comments (0)
Add to wishlistDelete from wishlist
Cite this document
Summary
Literature Review Program Overview Science Teacher Professional Development Program is an educational program that aims to incorporate the 5E educational model in teaching students in Science related topics. This program will include workshops for educators in aiding them to be trained for a more effective teaching method in their respective schools…
Download full paperFile format: .doc, available for editing
HIDE THIS PAPERGRAB THE BEST PAPER92.6% of users find it useful 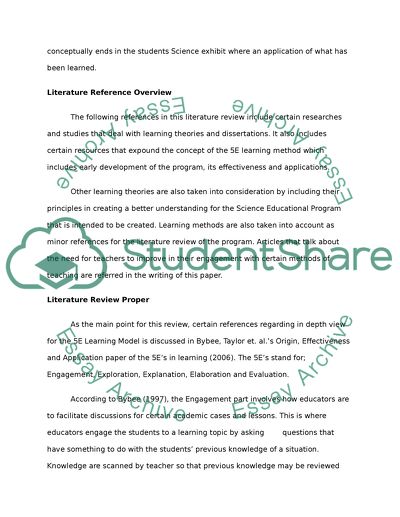 Download file to see previous pages By defining a structure to the program, teachers are engaged into a learning experience that they, themselves, will be reverberate in their respective schools and classrooms. The program also integrates the concept of continuing this learning process in the case of the students. The challenge is to inspire them to continually update their learning with the 5E’s of learning model after it has been imparted by the educator. The program provides a structure that extends to the classroom after the program for teacher-aimed workshops. Students are provided with a more in depth encounter with text books. Text books are then articulated by students in a personal manner which increases possibility of the comprehension of topics in textbooks. This conceptually ends in the students Science exhibit where an application of what has been learned. Literature Reference Overview The following references in this literature review include certain researches and studies that deal with learning theories and dissertations. It also includes certain resources that expound the concept of the 5E learning method which includes early development of the program, its effectiveness and applications. Other learning theories are also taken into consideration by including their principles in creating a better understanding for the Science Educational Program that is intended to be created. Learning methods are also taken into account as minor references for the literature review of the program. Articles that talk about the need for teachers to improve in their engagement with certain methods of teaching are referred in the writing of this paper. Literature Review Proper As the main point for this review, certain references regarding in depth view for the 5E Learning Model is discussed in Bybee, Taylor et. al.’s Origin, Effectiveness and Application paper of the 5E’s in learning (2006). The 5E’s stand for; Engagement, Exploration, Explanation, Elaboration and Evaluation. According to Bybee (1997), the Engagement part involves how educators are to facilitate discussions for certain academic cases and lessons. This is where educators engage the students to a learning topic by asking questions that have something to do with the students’ previous knowledge of a situation. Knowledge are scanned by teacher so that previous knowledge may be reviewed and assessed by the learners and the educators alike. The Initial knowledge of a topic is discussed to identify certain cliches and information that are known by the learners beforehand. Springboard questions that would be leading the class to relating practical events that deal with the learners’ lives are highly recommended to be an effective learning experience to learners. These recommendations include activities that are indoor and outdoor in nature which leads to the second E of the learning method. Needham, et. Al (1994) also talks about the 5E method wherein The Exploration stage of the learning method invites the learners and the educators alike to embark on hands-on activities that would require beforehand preparation. These aimed to improve the comprehension of a certain Science topic that is due to be discussed. For example, if a topic that will be explored would deal with gravity and motion, an activity that would engage the students into throwing or jumping games can be prepared. This is also the ...Download file to see next pagesRead More
Share:
Tags
Cite this document
(“Literature Review for Program Design Research Paper”, n.d.)
Retrieved from https://studentshare.org/education/1435544-literature-review-for-program-design-attached-is
(Literature Review for Program Design Research Paper)
https://studentshare.org/education/1435544-literature-review-for-program-design-attached-is.
“Literature Review for Program Design Research Paper”, n.d. https://studentshare.org/education/1435544-literature-review-for-program-design-attached-is.
Comments (0)
Click to create a comment or rate a document

CHECK THESE SAMPLES OF Literature Review for Program Design

8 Pages(2000 words)Term Paper
sponsored ads
Save Your Time for More Important Things
Let us write or edit the research paper on your topic "Literature Review for Program Design" with a personal 20% discount.
GRAB THE BEST PAPER

Let us find you another Research Paper on topic Literature Review for Program Design for FREE!