Comments (0)
Add to wishlistDelete from wishlist
Cite this document
Summary
An author of the essay "ESL Teacher in a Public School in Korea" claims that there is a feeling of establishing professional affinity with the students in teaching by making learning a lot of fun to them. In teaching, I can feel that I am helping a lot of young people…
Download full paperFile format: .doc, available for editing
HIDE THIS PAPERGRAB THE BEST PAPER94.4% of users find it useful 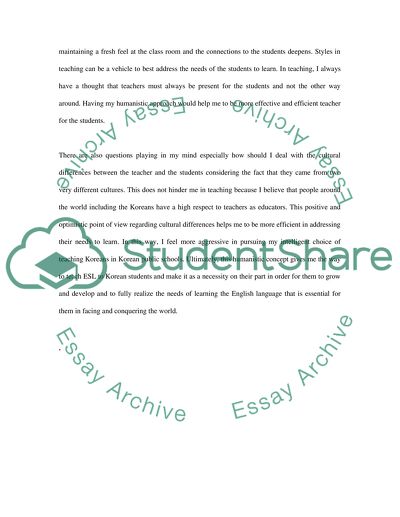 Extract of sample "ESL Teacher in a Public School in Korea"

﻿ESL Teacher in a Public School in Korea
Teaching ESL to Korean students is not an easy task, it is considered as a big task, challenging, and very hard to do. In spite of the challenges that confronts in teaching ESL to students that are not familiar yet with English language, what holds me in pursuing the job is my passion for teaching. There is a feeling of establishing professional affinity with the students in teaching by making learning a lot of fun to them. In teaching I can feel that I am helping a lot of young people, leading them in maintaining their interest in studies and ignite a spark of enthusiasm in the continuing process of learning the English Language. My passion in teaching includes my happiness not only because I am working in the mastery field of my studies but also I can let my students feel being comfortable in their learning environment. I find it very relevant to see and reach each student in school everyday and to challenge them to be the best scholars and well disciplined people they can be while showing them the importance of life-long love for learning. In teaching them the ESL, I can feel that I could contribute a big part of me in their preparation and sooner, in facing the world using the international language which is English.
My philosophy and goal which I uses as a guide in my everyday life of teaching is to let my students feel the confidence in speaking using the English language, that they are learning something new everyday, they feel that they are improving and excited to learn more. They should not feel being intimidated by the course work and instead they must feel the excitement in learning the new language. Multiple aids as a technique in teaching is very important in maintaining a fresh feel at the class room and the connections to the students deepens. Styles in teaching can be a vehicle to best address the needs of the students to learn. In teaching, I always have a thought that teachers must always be present for the students and not the other way around. Having my humanistic approach would help me to be more effective and efficient teacher for the students.
There are also questions playing in my mind especially how should I deal with the cultural differences between the teacher and the students considering the fact that they came from two very different cultures. This does not hinder me in teaching because I believe that people around the world including the Koreans have a high respect to teachers as educators. This positive and optimistic point of view regarding cultural differences helps me to be more efficient in addressing their needs to learn. In this way, I feel more aggressive in pursuing my intelligent choice of teaching Koreans in Korean public schools. Ultimately, this humanistic concept gives me the way to teach ESL to Korean students and make it as a necessity on their part in order for them to grow and develop and to fully realize the needs of learning the English language that is essential for them in facing and conquering the world.

“ESL Teacher in a Public School in Korea Admission/Application Essay”, n.d. https://studentshare.org/education/1412466-personal-essay-to-be-an-esl-teacher-in-a-public.
Comments (0)
Click to create a comment or rate a document

On the other hand, the subjects in cohort studies are selected on the basis of whether they have a certain risk factor/exposure or not and are then followed over time to observe for the development of the outcome/disease (Mann, 2003). Cohort studies can either be prospective or retrospective and can be used to calculate the incidence of a disease and the relative risk of developing a disease.
As compared to observational studies, such as case-control and cohort studies, in interventional studies such as a randomised control trial, the investigator assigns the exposure. In other words, the investigators introduce an intervention and the study objective is to determine the effect of that intervention on the study population. Such...
7 Pages(1750 words)Assignment
sponsored ads
Save Your Time for More Important Things
Let us write or edit the admission/application essay on your topic "ESL Teacher in a Public School in Korea" with a personal 20% discount.
GRAB THE BEST PAPER

Let us find you another Admission/Application Essay on topic ESL Teacher in a Public School in Korea for FREE!