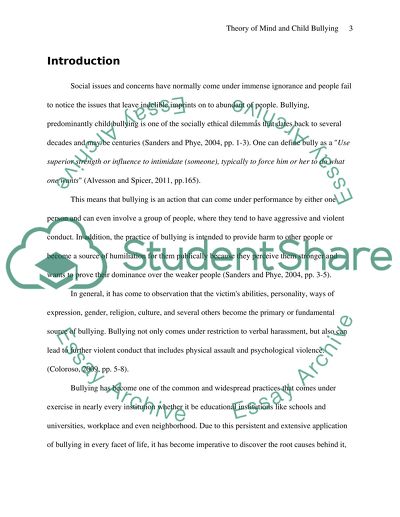 Extract of sample "Theory of Mind and Child Bullying"

Introduction
Social issues and concerns have normally come under immense ignorance and people fail to notice the issues that leave indelible imprints on to abundant of people. Bullying, predominantly child bullying is one of the socially ethical dilemmas that dates back to several decades and may be centuries (Sanders and Phye, 2004, pp. 1-3). One can define bully as a "Use superior strength or influence to intimidate (someone), typically to force him or her to do what one wants" (Alvesson and Spicer, 2011, pp.165).
This means that bullying is an action that can come under performance by either one person and can even involve a group of people, where they tend to have aggressive and violent conduct. In addition, the practice of bullying is intended to provide harm to other people or become a source of humiliation for them publically because they perceive them stronger and wants to prove their dominance over the weaker people (Sanders and Phye, 2004, pp. 3-5).
In general, it has come to observation that the victim's abilities, personality, ways of expression, gender, religion, culture, and several others become the primary or fundamental source of bullying. Bullying not only comes under restriction to verbal harassment, but also can lead to further violent conduct that includes physical assault and psychological violence. (Coloroso, 2009, pp. 5-8).
Bullying has become one of the common and widespread practices that comes under exercise in nearly every institution whether it be educational institutions like schools and universities, workplace and even neighborhood. Due to this persistent and extensive application of bullying in every facet of life, it has become imperative to discover the root causes behind it, the harm that it can provide and the extensive research with respect to the subject matter (Macfarlane and McPherson, 2004, pp. 10-12). The relation of child bullying to theory of mind is imperative t o understand because the theory of mind is one of the social cognitions that come under development in the early childhood. However, the actions of the child are highly dependent upon social cognitions. This means that the mind and development of the child leads to understand the actions performed in the social world. Due to this, it comes under considerations as one of the most important developments of early childhood that helps in shaping the personality of the child. Child bullying has a lot of influence and power on how the personality of the child comes under formation in his or her childhood. Therefore, it is pivotal to study and analyse the role and impact of theory of mind upon the performance of the child that can help understand how and why child bullying comes under relationship to theory of mind. The thesis report has come under division into segments where the first segment broadly defines the wide-ranging research that has come under performance with respect to the grave issue, at the same time enlightening child bullying and theory of mind. In addition, it also includes a comparative study that delineates the relationship between the two. The following segment highlights the strengths, limitations, and omission in the research taken place concerning the two aspects. Lastly, based on all the research studies suggestions would come under articulation for future research questions as well as research methods. Overview to Literature Review Process The literature review concerning the matter of child bullying and theory of mind have come under consideration, numerous studies and researches have come under practice that can bring this matter into ...Download file to see next pagesRead More
Share:
Tags
Cite this document
(“Theory of Mind and Child Bullying Literature review”, n.d.)
Retrieved from https://studentshare.org/education/1396609-critical-literature-review-on-theory-of-mind-and

“Theory of Mind and Child Bullying Literature Review”, n.d. https://studentshare.org/education/1396609-critical-literature-review-on-theory-of-mind-and.
Comments (1)
Click to create a comment or rate a document

ge
genevieveheathc added comment 2 years ago
Student rated this paper as
Terrific work done on the "Theory of Mind and Child Bullying". I think it is the best essay I have seen so far.

CHECK THESE SAMPLES OF Theory of Mind and Child Bullying

The need for the procedure had been stressed due to the abundance of children who had experienced trauma or even any form of neglect. The study then includes the victims of abuse, domestic violence and even lack of needed attention while the child is growing up. To be able to lessen such effects in the lives of the children, the said types of therapy are continuously developed (Barnes, p. 40).
There are different ways to be able to help a child. These constitute the provision of emotional care which can answer the needs of the child in different aspects most especially the emotional and behavioural facets. For example, the simple act of making sounds and having eye contact with another person during the period of infancy can...
7 Pages(1750 words)Case Study
sponsored ads
Save Your Time for More Important Things
Let us write or edit the literature review on your topic "Theory of Mind and Child Bullying" with a personal 20% discount.
GRAB THE BEST PAPER

Let us find you another Literature review on topic Theory of Mind and Child Bullying for FREE!