Comments (1)
Add to wishlistDelete from wishlist
Cite this document
Summary
The study is done to compare the academic achievement of the students from New York Public Schools and New York Charter Schools in areas of ELA and Math 2009-2010 State Exams and from this to try to determine which schools are academically better and thus give parents reasons to choose one over the other…
Download full paperFile format: .doc, available for editing
HIDE THIS PAPERGRAB THE BEST PAPER96.2% of users find it useful 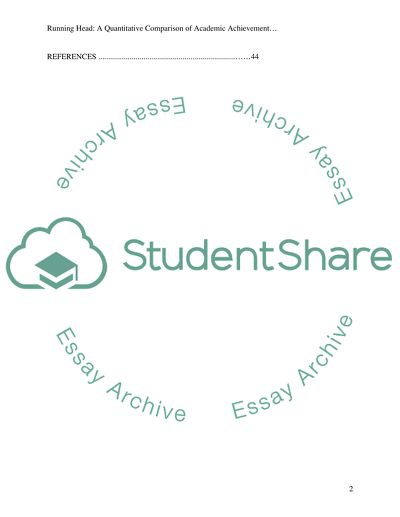 Download file to see previous pages According to the research findings charter schools are public schools that operate independently of the district board of education, making them a one-school public school district. They have their own charters written by private individuals: parents, educators, community leaders that enumerate their laws, governance structure and principles. This autonomous setup results in bigger accountabilities for the school. Because of this autonomy and customized curricula, many people believe that charter schools are far more beneficial to children, as compared to public schools. People also believe that charter schools provide better services because of the high standards they set for themselves. There are studies that compare the effectiveness of public schools versus charter schools. However, they differ in their findings. As our understanding of the cognitive development of young children increases, so does the need for high-quality childhood education programs facilitated by confident, competent instructors. The growing appreciation for the potential benefits of quality educational programs has strengthened funding agencies’ and policy makers’ commitment to ensuring all families have access to programming that can support and enhance children’s development, growth, and learning. These benefits can be realized, however, only in high-quality programs with characteristics linked to positive outcomes for children. The establishment of a stable formula for measuring the academic achievement of the students from public schools and charter schools is needed. According to research conducted by Lubienski and Lubienski (2006), public schools and charter schools in New York City are both able to produce students that exemplify academic excellence. Since the No Child Left Behind (NCLB, 2002) legislation was enacted, schools must show that they are contributing to a child’s academic achievement, especially in the areas of English Language Arts (ELA) and Mathematics. Brennan (2009) indicates that New York City public school students outperform their peers from comparable school districts, giving the distinct impression that public schools are also effective educational forums. Conversely, the achievement analysis conducted by Hoxby, Murarka, & Kang (2009) indicates that charter schools are superior to public schools in their ability to educate students in a multitude of academic categories. In addition, Lubienski & Lubienski (2006) indicate that charter school and the “private-style organizational models” (p.2) were ahead of public schools in providing a model for ...Download file to see next pagesRead More
Share:
Tags
Cite this document
(“Quantitative Comparison of Academic Achievement in NYC Public Schools Dissertation”, n.d.)
Retrieved from https://studentshare.org/education/1395297-quantitative-comparison-of-academic-achievement-in-nyc-public-schools-vs-nyc-charter-schools-measured-by-2009-2010-nys-ela-and-math-exams
(Quantitative Comparison of Academic Achievement in NYC Public Schools Dissertation)
https://studentshare.org/education/1395297-quantitative-comparison-of-academic-achievement-in-nyc-public-schools-vs-nyc-charter-schools-measured-by-2009-2010-nys-ela-and-math-exams.
“Quantitative Comparison of Academic Achievement in NYC Public Schools Dissertation”, n.d. https://studentshare.org/education/1395297-quantitative-comparison-of-academic-achievement-in-nyc-public-schools-vs-nyc-charter-schools-measured-by-2009-2010-nys-ela-and-math-exams.
Comments (1)
Click to create a comment or rate a document

ka
kaciemcglynn added comment 2 years ago
Student rated this paper as
This dissertation was always my weak point. I could never complete it well. Still, after I found this particular document, I understood how it should be done. So, I performed my research afterward and completed the dissertation in several hours, instead of months as it was previously.

The Chandler Kamart pharmacy is a very busy pharmacy with three full-time pharmacists and 8 pharmacy assistants working in one shift. With...
9 Pages(2250 words)Essay
sponsored ads
Save Your Time for More Important Things
Let us write or edit the dissertation on your topic "Quantitative Comparison of Academic Achievement in NYC Public Schools vs. NYC Charter Schools Measured by 2009 - 2010 NYS ELA and Math Exams" with a personal 20% discount.
GRAB THE BEST PAPER

Let us find you another Dissertation on topic Quantitative Comparison of Academic Achievement in NYC Public Schools vs. NYC Charter Schools Measured by 2009 - 2010 NYS ELA and Math Exams for FREE!