Comments (0)
Add to wishlist Delete from wishlist
Cite this document
Summary
The paper "Is America a Melting Pot or a Salad Bowl?" discusses that America is also described as a salad bowl because there are many different types of clothes which are worn by different ethnic groups. These also indicate the different shades of colors which people prefer to wear. …
Download full paper File format: .doc, available for editing
HIDE THIS PAPERGRAB THE BEST PAPER94.5% of users find it useful 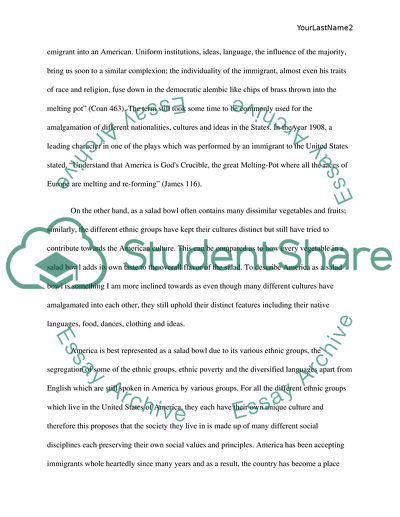 Download file to see previous pages It can be referred to a blend of culture as many minority groups have given up their native cultures in pursuit of a more equal and blended society. The word ‘melting pot’ was first time used to describe America in the 1780’s and in the year 1875, a magazine described the incorporation of immigrants in the United States as follows, “ The fusing process goes on as in a blast-furnace; one generation, a single year even-- transforms the English, the German, the Irish emigrant into an American. Uniform institutions, ideas, language, the influence of the majority, bring us soon to a similar complexion; the individuality of the immigrant, almost even his traits of race and religion, fuse down in the democratic alembic like chips of brass thrown into the melting pot” (Coan 463). The term still took some time to be commonly used for the amalgamation of different nationalities, cultures and ideas in the States. In the year 1908, a leading character in one of the plays which United performed by an immigrant to the United States stated, “Understand that America is Gods Crucible, the great Melting-Pot where all the races of Europe are melting and re-forming” (James 116).
On the other hand, as a salad bowl often contains many dissimilar vegetables and fruits; similarly, the different ethnic groups have kept their cultures distinct but still have tried to contribute towards the American culture. This can be compared as to how every vegetable in a salad bowl adds its pursuit taste to the overall flavor of the salad. To describe America as a salad bowl is something I am more inclined towards as even though many different cultures have amalgamated into each other, they still uphold their distinct features including their native languages, food, dances, clothing and ideas. America is best represented as a salad bowl due to its various ethnic groups, the segregation of some of the ethnic groups, ethnic poverty and the diversified languages apart from English which are still spoken in America by various groups. ...Download file to see next pages Read More
Share:
Tags
Cite this document
(Is America a Melting Pot or a Salad Bowl Research Paper, n.d.)
Is America a Melting Pot or a Salad Bowl Research Paper. Retrieved from https://studentshare.org/culture/1762876-is-america-a-melting-pot-or-a-salad-bowl

“Is America a Melting Pot or a Salad Bowl Research Paper”, n.d. https://studentshare.org/culture/1762876-is-america-a-melting-pot-or-a-salad-bowl.
Comments (0)
Click to create a comment or rate a document

Myth of the Melting Pot

This cultural mix is bound to occur due to melting pot of societies. But it is also believed that this argument and opposition of melting pot is just a myth and United States gets unaffected by it regardless of the increase in different racial groups. The article, The Myth of the Melting Pot written by Michael A. Fletcher, in the Washington Post in 1998 supports this vies and continues to take a stand that there is still a racial and ethnic divide in America especially between Blacks and Whites or Africans or Americans (Fletcher, 1998).
The article clearly illustrates that even if people of different races and cultures enter America, they are required to become a part of the American culture rather than fusing their own with...
14 Pages (3500 words) Term Paper

...?Kevin Zhoe English 96 October 16, Applicability of Multiculturalism or Melting Pot Theory A Mexican American d Richard Rodriguez was asked if he was an American or a Hispanic; his answer was that he thinks of himself as actually Chinese. Rodriguez’s parents were both Mexican but he grew up in Los Angeles where his neighbors were all Chinese. As such, he identifies himself more with Chinese cultural orientation than that of being either a Mexican or an America. The concept of culture has evolved through time. It was initially viewed as an intriguing complex sociological framework since it reflects the elaborate interaction of values, attitudes, perceptions and behavior displayed by a particular society. Eventually, culture emerged...
5 Pages (1250 words) Essay

... refer to such a statement as racist. This is not to say, that celebrating the ethnic history of your family is wrong in America; of course, it is not. There are many people who are wonderful, multi-ethnic, multicultural, individuals, families, and communities that function beautifully and are wonderful testament to what American could be. However, there are many situations and instances where that is sadly far from the case. Conclusion Ultimately, the “melting pot” America of the past is long gone, and the salad bowl analogy may be a temporary and adequate replacement. However, if the United States does not become less segregated, less ethnically motivated, then eventually we will be lucky if we can refer to America’s citizens as sitting...
4 Pages (1000 words) Essay

.... Here, each of the cultures tries to maintain the distinct qualities and values and the society is composed of individuals with pure culture. Kallen’s idea of cultural pluralism is said to be a compromise in between “melting pot” and “salad bowl” forms of society where the ethnic communities are not fused, but at the same time they tend to exist within one of the societies and adapting to another and also simultaneously maintaining their own identities. It has been seen and analyzed that the diaspora communities have the ability to hold longer the “salad bowl” kinds of society as they are able to maintain contacts much more easily than homelands (Kokot & Alfonso, 2004, p. 27). The business section tends to share certain values and beliefs...
8 Pages (2000 words) Term Paper

Social struggles in The Melting Pot and America

... Your Your Melting Pot or Mess Why the United s Needs no Official Language In the years since September 11,2001, what had already been a predominant sentiment against immigration received the validation of fear: these foreigners seething into our country's borders might not only be taking jobs away from hard-working Americans, so the argument went, they might also be planning to murder thousands of those Americans. Forget the debate about illegal immigrants sucking up billions of dollars in health benefits, education for their children (who as often as not drop out before graduation!), and other social services - now the anti-immigration forces have the banner of national security to carry. To some, it may seem sensible to tighten...
3 Pages (750 words) Essay

Check for temperature and sign of defects
Lower the cooler temperature setting.
PREPARE
Contamination
No
Use of clean utensils.
Ensure all utensils are clean before use.
Inform dishwasher if any utensils are not clean.
SERVE
Contamination
Yes
Serve chilled at 10
Check serving temperature
Discard if temperature limit is exceeded
Hard Boiled Egg
RAW MATERIALS:
Fresh Eggs (1-2 weeks old)
Water
PROCESS
1. Place eggs in single layer in saucepan.
2. Cover with at least one inch of cold water over tops of shells.
3. Cover pot with lid and bring to a boil over medium heat.
Critical Step!
4. As soon as the water comes to a full boil, remove from heat and let stan...
14 Pages (3500 words) Essay

.... Over the years, American society has been described in many ways, one of which is as the 'melting pot'. The early twentieth century debate about the 'melting pot' evolved as Jewish writers envisioned an America that might better accommodate Jews. Their historic experience as a minority prompted them to take the lead in re-imagining America for an entire wave of immigrants. Melting pot is a term used to describe a multi-cultural or multi-ethnic society. So far as this definition goes, the term melting pot surely suits American society with so many cultures around the world mingling with one another and melting into this one pot called America. (http://query.nytimes.com/gst/fullpage.htmlres=9E00EFDC1331F932A25751C0A9679C8B63&sec=&spon...
3 Pages (750 words) Assignment

An overcome approach to the Melting Pot

...August 8, 2007 Military Draft: an overcome approach to the "Melting Pot" Would you leave your mate or brother in the lurch Could you be comfortably seated at your living room watching on the TV how your compatriots fall one day after other, sometimes in Basra, sometimes in Kabul, perhaps in Baghdad Would you be able to do your bit for the common good Would you be responsible enough to weigh up how much you are receiving from your country and how much are you ready to give for it Would you be able to assume your duty and personal responsibility - always understood the latter as your personal contribution to your society - and to respond to the military draft in case this came into action These are questions that resound for the last...
3 Pages (750 words) Essay

...Running Head: POSTCOLONIAL MELTING POT Postcolonial Melting Pot [The [The of the Postcolonial Melting Pot In The Buddha of Suburbia, the space of performance, shifting from one margin to another, repeatedly destabilises the controlling narratives that define ideas of centre. Unsurprisingly, most commentators have tended to see Kureishi's sympathies as lying with the underdog. But such is the indeterminate subjectivity of both films-the contradictoriness of their characters, their unresolved ethical dilemmas, their wryly tragicomic representation of conflicted histories and divided allegiances-that they end up striking an ironic attitude to their own radicalism. Kureishi's approach questions the alleged righteousness of rioting and is less...
8 Pages (2000 words) Book Report/Review

...The "melting pot" or fusion model of acculturation has been contrasted with the "cultural mosaic" or multicultural model of acculturation. What are the advantages and disadvantages of these two models Which of the models is most likely to become a reality in this country The two theories of acculturation, the melting pot and the multicultural often reflect the ideological perspective of the person who is proposing them. Thus those who adhere to a melting pot theory tend to be more traditional and/or conservative in nature. They see "America" as a white, English-speaking country in which minorities need to arrive and assimilate in as few years as possible. The multiculturalists tend to be left-leaning, and seek to enable immigrants...
2 Pages (500 words) Essay

Let us find you another Research Paper on topic Is America a Melting Pot or a Salad Bowl for FREE!