Comments (0)
Add to wishlistDelete from wishlist
Cite this document
Summary
The paper "The Third Space Concept " states that third space theory has hence been used in relation to many literacy educations to explore how the given different cultural spaces children moreso inhabit could be all brought together while in the classroom (Kate & Jennifer 77)…
Download full paperFile format: .doc, available for editing
HIDE THIS PAPERGRAB THE BEST PAPER96.3% of users find it useful 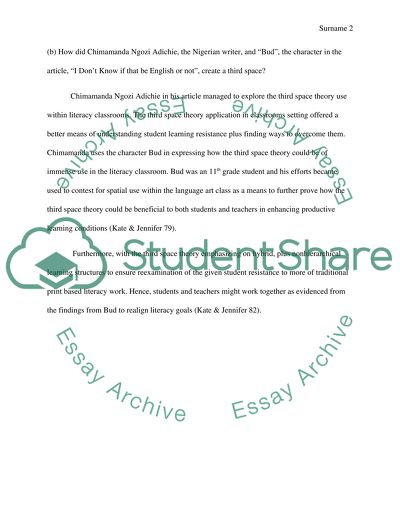 ﻿Cultural Geography Essay
(a) Explain what one understands “Third Space” to be in the spatial relationships between people who share a culture.
Third space often been used in an attempt to understand exactly what happens when some given popular cultural texts becomes incorporated in some school curriculum. Third space concept became first developed by a person called Bhabha in 1994 (Kate & Jennifer 74). Furthermore, it acts as a space from which colonial authority becomes challenged as hybrid identities become created. Furthermore, the third space often remains not to be a cohesive one. Bhabha describes third space to be a site of intense tension, of insurmountable differences and competing powers.
Moreover, the third space concept hence became used to find out more on how the diverse worlds of nursery, home or school could be brought in an education setting (Kate & Jennifer 76). Therefore, in that conceptualization, home becomes regarded as one space, then educational institution as second space and finally the classroom where home and school culture meet as third space. Third space theory has hence been used in relation to many literacy educations to explore how the given different cultural spaces children moreso inhabit could be all brought together while in classroom (Kate & Jennifer 77).
(b) How did Chimamanda Ngozi Adichie, the Nigerian writer, and “Bud”, the character in the article, “I Don’t Know if that be English or not”, create a third space?
Chimamanda Ngozi Adichie in his article managed to explore the third space theory use within literacy classrooms. The third space theory application in classrooms setting offered a better means of understanding student learning resistance plus finding ways to overcome them. Chimamanda uses the character Bud in expressing how the third space theory could be of immense use in the literacy classroom. Bud was an 11th grade student and his efforts became used to contest for spatial use within the language art class as a means to further prove how the third space theory could be beneficial to both students and teachers in enhancing productive learning conditions (Kate & Jennifer 79).
Furthermore, with the third space theory emphasizing on hybrid, plus nonhierarchical learning structures to ensure reexamination of the given student resistance to more of traditional print based literacy work. Hence, students and teachers might work together as evidenced from the findings from Bud to realign literacy goals (Kate & Jennifer 82).
Works Cited Read More
Share:
Tags
Cite this document
(“The Third Space Concept Assignment Example | Topics and Well Written Essays - 500 words”, n.d.)
The Third Space Concept Assignment Example | Topics and Well Written Essays - 500 words. Retrieved from https://studentshare.org/culture/1592558-culture-geography-essay-2

CHECK THESE SAMPLES OF The Third Space Concept

These verses express the importance of karma in guiding the Buddhists in th...
6 Pages(1500 words)Assignment

Socialism and the Third Way

Capitalism is mainly an economic system where private individuals and business organizations control the production and exchange of goods and services in the market with little control of public agencies. Individuals, whether owners of land and capital or salaried workers are free to pursue maximum gain from the use of their resources. Government agencies are responsible for providing civil and military defensive capabilities. In stark contrast, socialist doctrines call for state ownership and control of the fundamental means of production and distribution of wealth through the peaceful and diplomatic deconstruction of previously installed capitalist systems. The government is called upon to manage, through nationalization, the na...
11 Pages(2750 words)Assignment

The Concept of Corporate Personality

An explanation of these concepts is of the essence and an evaluation of the courts has approached the separate legal entity and the time times when they have lifted the veil of incorporation is necessary. The current position can only be determined after a detailed background of these is made. The underlying principle of separate legal entity states that a company is a separate entity from its shareholders meaning that the company can sue or be sued in its own name, can hold property and be liable to debts of the company. From this principle evolved the notion of limited liability of shareholders, that is the shareholders of the company are held liable only to the extent of unpaid amounts on shares and thus the company retains all...
6 Pages(1500 words)Article
sponsored ads
Save Your Time for More Important Things
Let us write or edit the assignment on your topic "The Third Space Concept" with a personal 20% discount.
GRAB THE BEST PAPER

Let us find you another Assignment on topic The Third Space Concept for FREE!