Comments (0)
Add to wishlist Delete from wishlist
Cite this document
Summary
The purpose of this assignment is to explore the issue of art values in detail. Not only is it important to look into what values arts usually carry and offer to the society but, more importantly, how these values are cultivated and represented by the most important cultural policy documents.   …
Download full paper File format: .doc, available for editing
HIDE THIS PAPERGRAB THE BEST PAPER93.5% of users find it useful 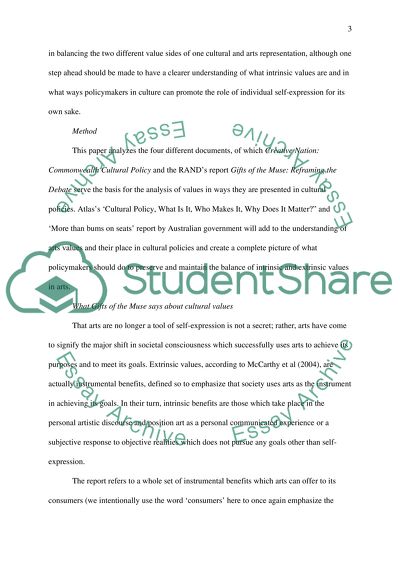 Download file to see previous pages Because policy documents have far-reaching implications for the state of arts in society, the ways in which these documents perceive and represent art values are increasingly important. That is why the results of this research will provide recommendations for the policymakers to follow, to make sure that arts meet their goals and objectives and do not contradict the goals that society seeks to achieve through arts.

The current arguments in favor of supporting arts through public policies and initiatives emphasize the role, which arts play and can potentially play in promoting a broad set of societal values. Arts have already ceased to be a mere tool of the individual or collective self-expression and exemplify a tool that society extensively uses to pursue its economic, political, social, and cultural goals. It would be fair to say that postmodern art is a unique combination of intrinsic and extrinsic values, and for any cultural policy document to be successful and effective, it should recognize and support this dualism of values in arts. Creative Nation: Commonwealth Cultural Policy is one of the few documents that succeeded in balancing the two different value sides of one cultural and arts representation, although one step ahead should be made to have a clearer understanding of what intrinsic values are and in what ways policymakers in culture can promote the role of individual self-expression for its own sake.

This paper analyzes the four different documents, of which Creative Nation: Commonwealth Cultural Policy and the RAND’s report Gifts of the Muse: Reframing the Debate serve the basis for the analysis of values in ways they are presented in cultural policies. Atlas’s ‘Cultural Policy, What Is It, Who Makes It, Why Does It Matter?” and ‘More than bums on seats’ report by the Australian government will add to the understanding of art values and their place in cultural policies and create a complete picture of what policymakers should do to preserve and maintain the balance of intrinsic and extrinsic values in arts.    ...Download file to see next pages Read More
Share:
Cite this document
(Investigating How a Cultural Policy Document Makes Statements about Assignment, n.d.)
Investigating How a Cultural Policy Document Makes Statements about Assignment. Retrieved from https://studentshare.org/culture/1564314-report-investigating-how-a-cultural-policy-document-makes-statements-about-the-value-of-the-arts

2. “The calm, deliberate composure with which he spoke of his late deeds and intentions, the expression of his fiendlike face when excited by enthusiasm, still bearing the stains of the blood...
9 Pages (2250 words) Assignment

Cultural and social globalization denotes the extensive movement of goods, technologies, ideas, images and people around the entire world which has been...
6 Pages (1500 words) Coursework

To ensure that the education sector is diversified it is seen that in the United States of America many such policies have been implemented. In 1970s diversity was considered an important tool by the educational experts so that they could help students understand each other. The board of education of North Carolina then formulated a scheme for students through which they could practice a diversity of races in schools. This was known as the North Carolina Wake County Busing Policy which was functional till the late twenty-first century. It was now in July 2010 that the issue was raised again by the educational board members who then decided to scrap the policy of diversity with community-based schools. (Liane Membis 2010; Stacy Tei...
7 Pages (1750 words) Case Study
sponsored ads
Save Your Time for More Important Things
Let us write or edit the assignment on your topic "Investigating How a Cultural Policy Document Makes Statements about the Value of the Arts" with a personal 20% discount.
GRAB THE BEST PAPER

Let us find you another Assignment on topic Investigating How a Cultural Policy Document Makes Statements about the Value of the Arts for FREE!