Comments (0)
Add to wishlist Delete from wishlist
Cite this document
Summary
The paper "Video That Describes Orientalism Written by Edward Said" describes that Said somewhere in this video, we hear Said saying that majority of Arab countries are ruled by dictatorships and that was why they could not effectively counter the stereotyping…
Download full paper File format: .doc, available for editing
HIDE THIS PAPERGRAB THE BEST PAPER95.2% of users find it useful 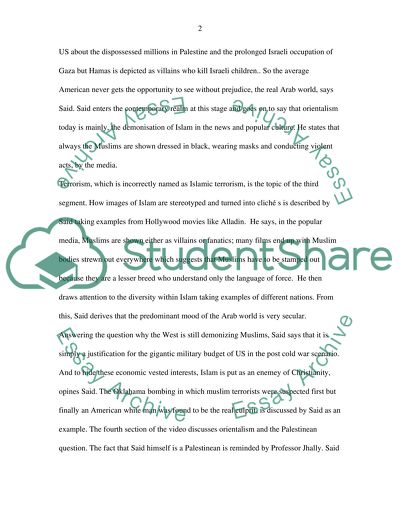 Download file to see previous pages Depiction of the Arab world by the media, literature and films, which were full of sensual women who were there to be used by men and East was depicted as a mysterious place full of secrets. This had no link with the people, who actually lived there, says Said. Said calls this viewpoint, orientalism and emphasises that this orientalist approach was creating an image outside history as if the life of the orient was placid, still and eternal. He elaborates his argument by saying that this was actually the creation of an ideal ‘other’. In the next part, orientalism is located by Said in the context of imperial conquest. Said reminds that Napolian invaded Egypt not only with his army but with scientists, architects, philologists, biologists, historians etc. Said says that the job of these non-military people was to record Egypt for the Europeans, conveniently suiting the invader’s ideology. The second section also specifically deals with American orientalism. According to Said, the ideas of Britain and France of the orient were weaved around the direct experience of ruling these nations but the US never directly occupied the east or the Middle East and so their experience was indirect. So, says Said, the American orientalism is much more based on abstractions. And he adds that American orientalism is politicized by the presence of Israel. Said reminds us that there is no word spoken in the US about the dispossessed millions in Palestine and the prolonged Israeli occupation of Gaza but Hamas is depicted as villains who kill Israeli children... So the average American never gets the opportunity to see without prejudice, the real Arab world, says Said. Said enters the contemporary realm at this stage and goes on to say that orientalism today is mainly, the demonisation of Islam in the news and popular culture. He states that always the Muslims are shown dressed in black, wearing masks and conducting violent acts, by the media. ...Download file to see next pages Read More
Share:
Tags
Cite this document
(Orientalism Movie Review Example | Topics and Well Written Essays - 1750 words - 1, n.d.)
Orientalism Movie Review Example | Topics and Well Written Essays - 1750 words - 1. https://studentshare.org/culture/1559953-orientalism

Pattern and Ornament: Orientalism in Dress

The Repertory of Orientalism by Sut Jhally

The Repertory of Orientalism

Orientalism and 19th Century Views on Space and Setting

Analysis of Video about Orientalism

6 Pages (1500 words) Term Paper
sponsored ads
Save Your Time for More Important Things
Let us write or edit the movie review on your topic "Video That Describes Orientalism Written by Edward Said" with a personal 20% discount.
GRAB THE BEST PAPER

Let us find you another Movie Review on topic Video That Describes Orientalism Written by Edward Said for FREE!