Comments (0)
Add to wishlist Delete from wishlist
Cite this document
Summary
The paper "The Dead Sea Scrolls Exhibit at the Royal Ontario Museum" highlights that part of the audience would be loyal followers of religion who have attended the museum in the past and may have some knowledge of the scrolls. Others may be tourists and some may fly across the world…
Download full paper File format: .doc, available for editing
HIDE THIS PAPERGRAB THE BEST PAPER96.3% of users find it useful 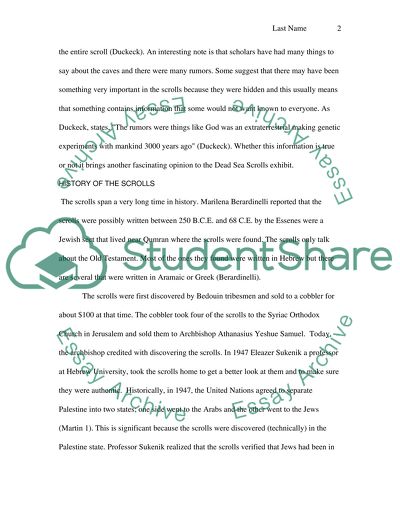 Download file to see previous pages The scrolls were preserved in cylindrical pottery jars and they were sealed with a lid of material that was not known. The jars stood approximately 50cm high and they were 25cm around. The Essenes who lived in the area were a "separatist" Jewish sect and they created an "ascetic monastic community" (Duckeck). They saved the scrolls and put them into the caves to hide them and to protect them from harm. Unfortunately, an earthquake made the Essenes leave their homes and they never came back to the area so people forgot about the caves. The parchment that the scrolls were written on was very fragile and this is why many of them became fragments instead of the entire scroll (Duckeck). An interesting note is that scholars have had many things to say about the caves and there were many rumors. Some suggest that there may have been something very important in the scrolls because they were hidden and this usually means that something contains information that some would not want knowing to everyone. As Duckeck, states, "The rumors were things like God was an extraterrestrial making genetic experiments with mankind 3000 years ago" (Duckeck). Whether this information is true or not it brings another fascinating opinion to the Dead Sea Scrolls exhibit.
The scrolls span a very long time in history. Marilena Berardinelli reported that the scrolls were possibly written between 250 B.C.E. and 68 C.E. by the Essenes were a Jewish sect that lived near Qumran where the scrolls were found. The scrolls only talk about the Old Testament. Most of the ones they found were written in Hebrew but there are several that were written in Aramaic or Greek (Berardinelli).
The scrolls were first discovered by Bedouin tribesmen and sold to a cobbler for about $100 at that time. The cobbler took four of the scrolls to the Syriac Orthodox Church in Jerusalem and sold them to Archbishop Athanasius Yeshua Samuel. Today, the archbishop credited with discovering the scrolls.  ...Download file to see next pages Read More
Share:
Tags
Cite this document
(Dead Sea scrolls exhitbit at The Royal Ontario Museum Coursework, n.d.)
Dead Sea scrolls exhitbit at The Royal Ontario Museum Coursework. https://studentshare.org/culture/1556119-dead-sea-scrolls-exhitbit-at-the-royal-ontario-museum

Contextualization of the Archaeology of Qumran and the Dead Sea Scrolls

The Science and Culture of the Sea: An Analysis of Herman Melvilles Moby Dick

The Problem with the Aral Sea

Analysis of The Old Man and the Sea

8 Pages (2000 words) Book Report/Review
sponsored ads
Save Your Time for More Important Things
Let us write or edit the coursework on your topic "The Dead Sea Scrolls Exhibit at the Royal Ontario Museum" with a personal 20% discount.
GRAB THE BEST PAPER

Let us find you another Coursework on topic The Dead Sea Scrolls Exhibit at the Royal Ontario Museum for FREE!