Comments (0)
Add to wishlist Delete from wishlist
Cite this document
Summary
This essay stresses that the McFadden Act 1927 was a law that was passed to govern the geographical spreading of commercial banks. In the years before 1927, only chartered banks that were affiliated to the government were allowed to spread and open several operational areas in different locations…
Download full paper File format: .doc, available for editing
HIDE THIS PAPERGRAB THE BEST PAPER91.1% of users find it useful 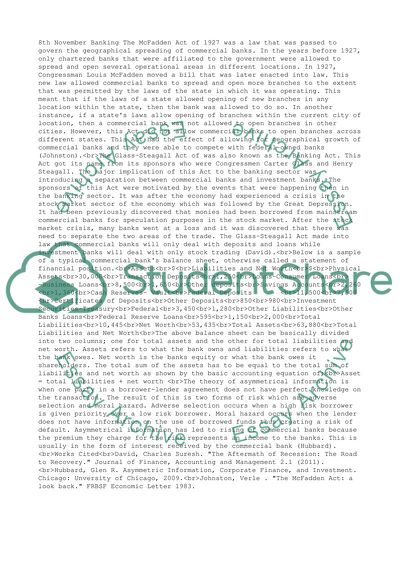 8th November Banking The McFadden Act of 1927 was a law that was passed to govern the geographical spreading of commercial banks. In the years before 1927, only chartered banks that were affiliated to the government were allowed to spread and open several operational areas in different locations. In 1927, Congressman Louis McFadden moved a bill that was later enacted into law. This new law allowed commercial banks to spread and open more branches to the extent that was permitted by the laws of the state in which it was operating. This meant that if the laws of a state allowed opening of new branches in any location within the state, then the bank was allowed to do so. In another instance, if a state’s laws allow opening of branches within the current city of location, then a commercial bank was not allowed to open branches in other cities. However, this Act did not allow commercial banks to open branches across different states. This Act had the effect of allowing for geographical growth of commercial banks and they were able to compete with federal-owned banks (Johnston).
The Glass-Steagall Act of was also known as the Banking Act. This Act got its name from its sponsors who were Congressmen Carter Glass and Henry Steagall. The major implication of this Act to the banking sector was introducing a separation between commercial banks and investment banks. The sponsors of this Act were motivated by the events that were happening then in the banking sector. It was after the economy had experienced a crisis in the stock market sector of the economy which was followed by the Great Depression. It had been previously discovered that monies had been borrowed from mainstream commercial banks for speculation purposes in the stock market. After the stock market crisis, many banks went at a loss and it was discovered that there was need to separate the two areas of the trade. The Glass-Steagall Act made into law that commercial banks will only deal with deposits and loans while investment banks will deal with only stock trading (David).
Below is a sample of a typical commercial bank’s balance sheet, otherwise called a statement of financial position.
Assets
$
Liabilities and Net Worth
$
Physical Assets
30,000
Transaction Deposits
1,250
Loans-Consumer Loans
-Business Loans
8,500
1,650
Other deposits
Savings Accounts
2,260
1,360
Cash Reserves- Vault
Federal Deposits
11,500
7,500
Certificates of Deposits
Other Deposits
850
980
Investment Securities-Treasury
Federal
3,450
1,280
Other Liabilities
Other Banks Loans
Federal Reserve Loans
595
1,150
2,000
Total Liabilities
10,445
Net Worth
53,435
Total Assets
63,880
Total Liabilities and Net Worth
The above balance sheet can be basically divided into two columns; one for total assets and the other for total liabilities and net worth. Assets refers to what the bank owns and liabilities refers to what the bank owes. Net worth is the banks equity or what the bank owes it shareholders. The total sum of the assets has to be equal to the total sum of liabilities and net worth as shown by the basic accounting equation of;
Asset = total liabilities + net worth
The theory of asymmetrical information is when one party in a borrower-lender agreement does not have perfect knowledge on the transaction. The result of this is two forms of risk which are adverse selection and moral hazard. Adverse selection occurs when a high risk borrower is given priority over a low risk borrower. Moral hazard occurs when the lender does not have information on the use of borrowed funds thus creating a risk of default. Asymmetrical information has led to rising of commercial banks because the premium they charge for the risk represents an income to the banks. This is usually in the form of interest received by the commercial bank (Hubbard).
Works Cited
David, Charles Suresh. "The Aftermath of Recession: The Road to Recovery." Journal of Finance, Accounting and Management 2.1 (2011).
Hubbard, Glen R. Asymmetric Information, Corporate Finance, and Investment. Chicago: Unversity of Chicago, 2009.
Johnston, Verle . "The McFadden Act: a look back." FRBSF Economic Letter 1983. Read More
Share:
Tags
Cite this document
(“Banking Case Study Example | Topics and Well Written Essays - 500 words”, n.d.)
Retrieved from https://studentshare.org/business/1701712-banking

CHECK THESE SAMPLES OF Banking

...? Banking  Table of Contents Question 2 3 Evaluation of Client 3 Financial ment Analysis 3 Nature of Business and Bank Reference 6 Credit Products to be Offered 7 Question 5 7 References 9 Question 2 Evaluation of Client The determination of the suitable credit product to be offered to Mr. Mark Angelo and his company Mark Equipment Pty Ltd. necessitates the credit assessment of Mr. Mark Angelo and his company. The collected financial information have to be analyzed in order to examine the ability of the client, Mr. Mark Angelo, to repay the debt as well as his net asset value, in addition to the assets which Mr. Mark Angelo can offer to the bank as security against the debt1. Financial Statement Analysis The financial statement analysis...
6 Pages (1500 words) Essay

...? Running Head: Banking Economics Essay One Deposit insurance infers the protection usually given by an agency of the government to depositors to avoid risk loss arising from failure of an intermediary (bank) or other deposition body. Deposit insurance is fixed and pays claim from a pool of funds to which every depository institution frequently contributes (Freixas & Rochet, 2008). However, this covers only a fixed maximum amount per account holder. Thus depository insurance is the measure taken by various banks to protect their client’s savings, either fully or partly to avoid the bank from returning. Depository insurance can be obtained instantly and they are not traded debts since bank incentive take risks and they have no discipline...
16 Pages (4000 words) Essay

...by claims against the various estates the mortgagors purchase. Afterwards, the individual mortgages are huddled together as a mortgage pool. The pool is held as the collateral for an MBS. The MBS can also be issued by a third-party financial institution for instance a large investment banking company or similar bank where the mortgages originated from. Aggregators can also issue mortgage backed securities. There are MBS whose main purpose and interests are guaranteed by a United States government entity or sponsored enterprise. The securities are known as agency MBS which do not expose an investor to credit risk. For a non-agency MBS, issuers normally employ various vehicles to enhance the credit of the...
4 Pages (1000 words) Assignment

... involves payments and settlements, bank transfer, household lending, documentary collection and credits and card businesses. E-banking services and products are accessed by customers who own accounts with E-banks. Customers make a request for information and conduct most of their retail banking transactions through computer, television and cell phones (Sarlak and Asghar, 2010). E-banking also describes the electronic connection between customers and bank so as to help in preparing, managing and controlling financial transactions. From a broader perspective, electronic banking is the provision of banking services through other means rather than the physical bank branches. E-Banking provides financial services to customers through various...
6 Pages (1500 words) Essay

...of solving the inherent challenges in the current banking industry, the reality is that it has its own disadvantages, as discussed in this essay. According to economists, there are a number of benefits of banks consolidation. One of these advantages is increased efficiency in the banking sector. Consolidation eliminates geographical restrictions in the banking industry, exposing it to high levels of competition, driving out all inefficient banks from the industry. This is not the only way of ensuring efficiency in the banking sector; moving to larger banking organizations too increases their levels of efficiency due to...
5 Pages (1250 words) Essay

...Order No. 123032 on Banking. BASEL II: The New Capital Adequacy Framework: An Assessment. Thomas Mathew The rules of Basel I for calculating risk weighted assets are said not to reflect the true economic risk of a transaction in its entirety, but only to a limited extent. Under the Basel 1, a corporate exposure with a high rating and low risk attracts the same credit risk weighting as a corporate exposure with a low rating and a high risk1. It is said that the arbitrary nature of both risk classes and corresponding risk weights prompted the Basel Committee to seek to replace the Basel 1 risk-based capital regime by one with greater differentiation and risk sensitivity. For this reason, the Basel Committee has proposed in the new Basel II...
15 Pages (3750 words) Essay

...Analysing operational risk failure of Barings bank (Source: Nick Leeson’s homepage) Feb 23, 1995: Investors and financial s worldwide greeted with shock and panic as one of Britain’s most historic banks, Barings, went bankrupt as news of a high-profile scandal echoed across much of print and electronic media. The bank’s net liabilities worth £1.3 billion was nearly twice that of its investment capital, a figure large enough to capsize its entire assets, cause job losses to over 1200 employees and subsequently, being overtaken by Dutch giant ING for a measly sum of £1, and exposing the risky environment in which equity corporations scale catastrophic...
10 Pages (2500 words) Essay

...is in a crisis, the environment for doing business worsens and the wealth declines though not for all cases and this consequently affects the private banking and wealth management industry negatively as it depends on the high net worth individuals. This paper is a critique of the economic development as a driver of the global private banking and wealth management industry. Economic Development It is the economic progress of a nation depicted by improved standards of living, literacy and life expectancy. Rapid development leads to increased demand for financial services for further development. Economic development occurs where the political and structural environment is conducive and is enhanced...
16 Pages (4000 words) Essay
sponsored ads
Save Your Time for More Important Things
Let us write or edit the case study on your topic "Banking" with a personal 20% discount.
GRAB THE BEST PAPER

Let us find you another Case Study on topic Banking for FREE!