Comments (0)
Add to wishlistDelete from wishlist
Cite this document
Summary
Ford vs Toyota Overview Ford and Toyota are among the leading brands in the automobiles industry. The objective of this paper is to perform SWOT analysis of Ford and Toyota and to execute a comparative study of both the companies. Certain recommendations for both the brands have also been mentioned in this paper…
Download full paperFile format: .doc, available for editing
HIDE THIS PAPERGRAB THE BEST PAPER92% of users find it useful 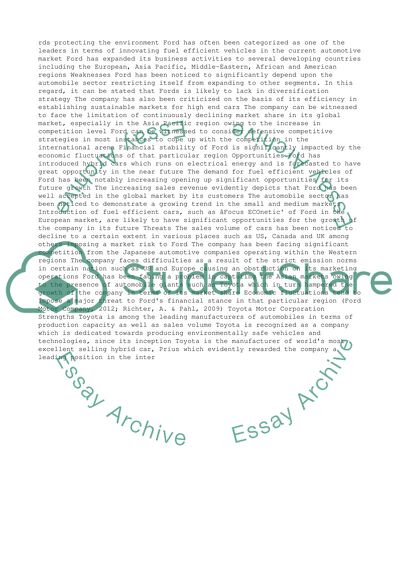 Extract of sample "Ford vs Toyota"

Download file to see previous pages rds protecting the environment Ford has often been categorized as one of the leaders in terms of innovating fuel efficient vehicles in the current automotive market Ford has expanded its business activities to several developing countries including the European, Asia Pacific, Middle-Eastern, African and American regions Weaknesses Ford has been noticed to significantly depend upon the automobile sector restricting itself from expanding to other segments. In this regard, it can be stated that Fords is likely to lack in diversification strategy The company has also been criticized on the basis of its efficiency in establishing sustainable markets for high end cars The company can be witnessed to face the limitation of continuously declining market share in its global market, especially in the Asia Pacific region owing to the increase in competition level Ford can be witnessed to consider defensive competitive strategies in most instances to cope up with the competition in the international arena Financial stability of Ford is significantly impacted by the economic fluctuations of that particular region Opportunities Ford has introduced hybrid cars which runs on electrical energy and is forecasted to have great opportunity in the near future The demand for fuel efficient vehicles of Ford has been notably increasing opening up significant opportunities for its future growth The increasing sales revenue evidently depicts that Ford has been well accepted in the global market by its customers The automobile sector has been noticed to demonstrate a growing trend in the small and medium markets Introduction of fuel efficient cars, such as ‘Focus ECOnetic’ of Ford in the European market, are likely to have significant opportunities for the growth of the company in its future Threats The sales volume of cars has been noticed to decline to a certain extent in various places such as US, Canada and UK among others imposing a market risk to Ford The company has been facing significant competition from the Japanese automotive companies operating within the Western regions The company faces difficulties as a result of the strict emission norms in certain nation such as US and Europe causing an obstruction on its marketing operations Ford has been facing a problem in capturing the Asian markets owing to the presence of automobile giants such as Toyota which in turn hampered the growth of the company in terms of its market share Economic fluctuations tend to impose a major threat to Ford’s financial stance in that particular region (Ford Motor Company, 2012; Richter, A. & Pahl, 2009) Toyota Motor Corporation Strengths Toyota is among the leading manufacturers of automobiles in terms of production capacity as well as sales volume Toyota is recognized as a company which is dedicated towards producing environmentally safe vehicles and technologies, since its inception Toyota is the manufacturer of world’s most excellent selling hybrid car, Prius which evidently rewarded the company a leading position in the inter ...Download file to see next pagesRead More
Share:
Tags
Cite this document
(“Ford vs Toyota Essay Example | Topics and Well Written Essays - 1000 words”, n.d.)
Ford vs Toyota Essay Example | Topics and Well Written Essays - 1000 words. Retrieved from https://studentshare.org/business/1453868-ford-vs-toyota
(Ford Vs Toyota Essay Example | Topics and Well Written Essays - 1000 Words)
Ford Vs Toyota Essay Example | Topics and Well Written Essays - 1000 Words. https://studentshare.org/business/1453868-ford-vs-toyota.
“Ford Vs Toyota Essay Example | Topics and Well Written Essays - 1000 Words”, n.d. https://studentshare.org/business/1453868-ford-vs-toyota.
Comments (0)
Click to create a comment or rate a document

CHECK THESE SAMPLES OF Ford vs Toyota

...Toyota Motor Corporation Table of Contents I. Brief history and corporate background II. Corporate profile, leadership and management style4 III. Toyota’s global recall: How it all started 18 IV. Toyota’s responsibility to the public 25 V. Measures taken to avoid similar problems in the future 27 VI. Conclusions 35 References 38 Toyota Motor Corporation I. Brief history and corporate background Toyota Motor Corporation is a Japanese-owned company engaged in the manufacture and sale of motor vehicle. It is a global company with numerous manufacturing plants located not only in Japan, its home country, but also world-wide. It started operations in 1937, the birth of the giant corporation, and as of March...
39 Pages(9750 words)Research Paper

The Social Performance of Toyota

...The current economic climate has made Toyota company aim at providing a good environment to its employees through the provision of long-term contracts and income security. According to Jeffrey and Kentaro (2000) social performance of a company is achieved through maintaining effective relationships, minimizing negative activities and creating a better environment. It can also be regarded as the benefits that a company spreads to its customers, employees and the community. This study shows how the company treats the natural environment, its equality policies, employment policies and the assistance it spreads to the entire community. Toyota being the third largest automotive manufacturer in the world, the company mostly aims at selling...
7 Pages(1750 words)Case Study

The main differences between the approaches made by American society and the Barbarian society were the purpose behind the invasions. The American society invaded Afghanistan after facing violent attacks from the Islamic anti-social groups. However, the Barbarian invasions in Rome signified the use of power by the leaders in order to capture territories and increase their kingdom. The main purpose behind the attacks made by the U.S. administration was to eliminate the terrorist groups from the world and make the world free f...
10 Pages(2500 words)Essay
sponsored ads
Save Your Time for More Important Things
Let us write or edit the essay on your topic "Ford vs Toyota" with a personal 20% discount.
GRAB THE BEST PAPER

Let us find you another Essay on topic Ford vs Toyota for FREE!