Comments (0)
Add to wishlist Delete from wishlist
Cite this document
Summary
Name Institution Question 1 What is GAFTA and what does it mean on behalf of its members? According to (Abedini & Peridy, 2007 p.1), this is an agreement which was signed in 1997 among 14 Arab states. By signing this document, the 14 Arab states had a vision of achieving Greater Arab Free Trade Area by the 7th year of the new millennium…
Download full paper File format: .doc, available for editing
HIDE THIS PAPERGRAB THE BEST PAPER91% of users find it useful 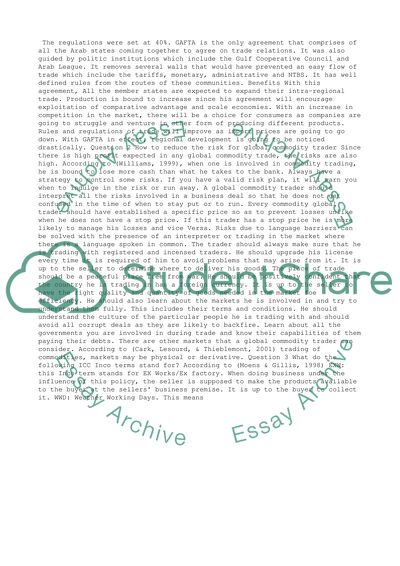 Download file to see previous pages The regulations were set at 40%. GAFTA is the only agreement that comprises of all the Arab states coming together to agree on trade relations. It was also guided by politic institutions which include the Gulf Cooperative Council and Arab League. It removes several walls that would have prevented an easy flow of trade which include the tariffs, monetary, administrative and NTBS. It has well defined rules from the routes of these communities. Benefits With this agreement, All the member states are expected to expand their intra-regional trade. Production is bound to increase since his agreement will encourage exploitation of comparative advantage and scale economies. With an increase in competition in the market, there will be a choice for consumers as companies are going to struggle and venture in other form of producing different products. Rules and regulations of trade will improve as import prices are going to go down. With GAFTA in effect, regional development is going to be noticed drastically. Question 2 How to reduce the risk for global commodity trader Since there is high profit expected in any global commodity trade, the risks are also high. According to (Williams, 1999), when one is involved in commodity trading, he is bound to lose more cash than what he takes to the bank. Always have a strategy to control some risks. If you have a valid risk plan, it will warn you when to indulge in the risk or run away. A global commodity trader should interpret all the risks involved in a business deal so that he does not get confused in the time of when to stay put or to run. Every commodity global trader should have established a specific price so as to prevent losses unlike when he does not have a stop price. If this trader has a stop price he is more likely to manage his losses and vice Versa. Risks due to language barriers can be solved with the presence of an interpreter or trading in the market where there is a language spoken in common. The trader should always make sure that he is trading with registered and incensed traders. He should upgrade his license every time it is required of him to avoid problems that may arise from it. It is up to the seller to determine where to deliver his goods. The place of trade should be a peaceful place free from war. He should be positively confident that the country he is trading in has a foreign currency. It is up to the seller to have the right quality and quantity of goods needed in the market foe efficiency. He should also learn about the markets he is involved in and try to understand them fully. This includes their terms and conditions. He should understand the culture of the particular people he is trading with and should avoid all corrupt deals as they are likely to backfire. Learn about all the governments you are involved in during trade and know their capabilities of them paying their debts. There are other markets that a global commodity trader can consider. According to (Cark, Lesourd, & Thieblemont, 2001) trading of commodities, markets may be physical or derivative. Question 3 What do the following ICC Inco terms stand for? According to (Moens & Gillis, 1998) EXW: this Inco term stands for EX Works/Ex factory. When doing business under the influence of this policy, the seller is supposed to make the products available to the buyer at the sellers’ business premise. It is up to the buyer to collect it. WWD: Weather Working Days. This means ...Download file to see next pages Read More
Share:
Tags
Cite this document
(“Commodity Trade Questions Essay Example | Topics and Well Written Essays - 1500 words”, n.d.)
Retrieved from https://studentshare.org/business/1450676-commodity

The protests according to the President of Mexico came from people who were either ignorant of the exact situation despite having a genuine concern and hence were swayed by emotions or by those who had become insecure in their jobs with globalization.
WTO claimed that the first charge was a misconception. It claimed that it opposed measures that use environmental protection as a guide for the protection of domestic industries against foreign competition and not to the measures to protect the environment as the allegations suggested. WTO debated that under its rules, environmental protection measures are prohibited only if those measures treat foreign producers more harshly than domestic producers. It was later found as seen i...
10 Pages (2500 words) Coursework

Air is humankind’s natural source of respiratory Oxygen. Its preservation may have been openly disregarded so that the current generation has to face up to the maintenance of it...
12 Pages (3000 words) Term Paper

... Content Outline I. Introduction (a) Definition (b) Background II. The Reason Why Countries Take Part in International Trade (a) Major Commodities in Today’s International Trade and Economic Gains Arising From it (b) Reasons Compelling Countries to Place Restrictions in International Trade III. Conclusion I. Introduction (a) Definition The expression international trade refers to an exchange of commodities across boundaries of nations. Two major terms are used to describe international trade (that’s imports and exports). Imports are services and goods bought from other countries while exports are the services and goods sold to nations or individuals of foreign countries. (b) Background It’s estimated that the international business...
6 Pages (1500 words) Coursework

Austria or you may call is the Republic of Austria in official terminology is located in Central Europe. Although the population figures do not touch the danger limit but the talent and resources are worthwhile there. Germany and Hungry are also near this region. Italy is in the south of Austria. Switzerland will be seen in the west. So, now you can realize the importance of this region clearly.
The GDP is also impressive here. You can say the economy is strong and it has much depth. The strong social market economy is the result of development and proper management by the government (DArt & Turner 2008). Traders find flexibility in business operations. Labor has a positive approach to work and jobs.
There was a tren...
9 Pages (2250 words) Term Paper
sponsored ads
Save Your Time for More Important Things
Let us write or edit the essay on your topic "Commodity Trade Questions" with a personal 20% discount.
GRAB THE BEST PAPER

Let us find you another Essay on topic Commodity Trade Questions for FREE!