Comments (0)
Add to wishlist Delete from wishlist
Cite this document
Summary
The US economy has many challenges especially from the year 2008 when it experienced a recession, high inflation, and high unemployment rates. The recession is reported to be officially over and a new period of new economic growth is expected in 2012 and in the years to follow. …
Download full paper File format: .doc, available for editing
HIDE THIS PAPERGRAB THE BEST PAPER94.5% of users find it useful 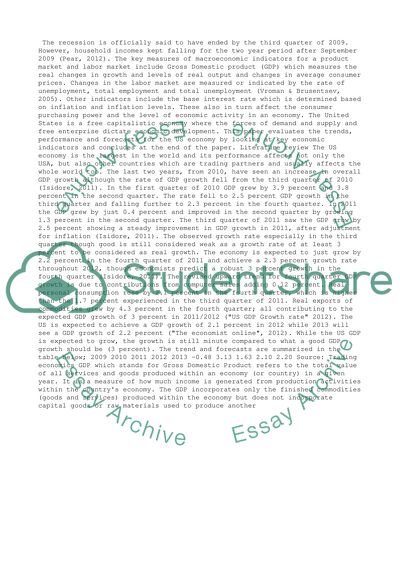 Download file to see previous pages The recession is officially said to have ended by the third quarter of 2009. However, household incomes kept falling for the two year period after September 2009 (Pear, 2012). The key measures of macroeconomic indicators for a product market and labor market include Gross Domestic product (GDP) which measures the real changes in growth and levels of real output and changes in average consumer prices. Changes in the labor market are measured or indicated by the rate of unemployment, total employment and total unemployment (Vroman & Brusentsev, 2005). Other indicators include the base interest rate which is determined based on inflation and inflation levels. These also in turn affect the consumer purchasing power and the level of economic activity in an economy. The United States is a free capitalistic economy where the forces of demand and supply and free enterprise dictate economic development. This paper evaluates the trends, performance and forecasts for the US economy by looking at key economic indicators and concludes at the end of the paper. Literature review The US economy is the largest in the world and its performance affects not only the USA, but also other countries which are trading partners and usually affects the whole world too. The last two years, from 2010, have seen an increase in overall GDP growth although the rate of GDP growth fell from the third quarter of 2010 (Isidore, 2011). In the first quarter of 2010 GDP grew by 3.9 percent and 3.8 percent in the second quarter. The rate fell to 2.5 percent GDP growth in the third quarter and falling further to 2.3 percent in the fourth quarter. In 2011 the GDP grew by just 0.4 percent and improved in the second quarter by growing 1.3 percent in the second quarter. The third quarter of 2011 saw the GDP grow by 2.5 percent showing a steady improvement in GDP growth in 2011, after adjustment for inflation (Isidore, 2011). The observed growth rate especially in the third quarter though good is still considered weak as a growth rate of at least 3 percent to be considered as real growth. The economy is expected to just grow by 2.2 percent in the fourth quarter of 2011 and achieve a 2.3 percent growth rate throughout 2012, though economists predict a robust 3 percent growth in the fourth quarter (Isidore, 2011). The revised upward trend for fourth quarter GDP growth is due to contributions from computer sales adding 0.12 percent. Real personal consumption rose by 2.1 percent in the fourth quarter, which is higher than the 1.7 percent experienced in the third quarter of 2011. Real exports of commodities grew by 4.3 percent in the fourth quarter; all contributing to the expected GDP growth of 3 percent in 2011/2012 (“US GDP Growth rate” 2012). The US is expected to achieve a GDP growth of 2.1 percent in 2012 while 2013 will see a GDP growth of 2.2 percent (“The economist online”, 2012). While the US GDP is expected to grow, the growth is still minute compared to what a good GDP growth should be (3 percent). The trend and forecasts are summarized in the table below; 2009 2010 2011 2012 2013 -0.48 3.13 1.63 2.10 2.20 Source: Trading economics GDP which stands for Gross Domestic Product refers to the total value of all services and goods produced within an economy (or country) in a given year. It is a measure of how much income is generated from production activities within the country’s economy. The GDP incorporates only the finished commodities (goods and services) produced within the economy but does not incorporate capital goods or raw materials used to produce another ...Download file to see next pages Read More
Share:
Tags
Cite this document
(“Expected US GDP Growth Rate Going Forward Research Paper”, n.d.)
Expected US GDP Growth Rate Going Forward Research Paper. Retrieved from https://studentshare.org/business/1446423-expected-us-gdp-growth-rate-going-forward

Under the balance of payment approach, the domestic cost of foreign currency is established like the cost of any other article of trade. In other words, the market demand and supply curvatures are intersected in the exchange market for that particular foreign currency. The modeling of the abovementioned approach related to the demand and supply for foreign exchange is quite...
13 Pages (3250 words) Term Paper

They are on trial and will be dealt with fairly. These laws ensure that no one, even if he or she has committed a crime is abused or punished cruelly.
Following the history of civilization like in china, we see the traces of systems for Criminal justice in order to provide safety for the citizens. Evolving through the years laws have been modified and changed to form the system that we know today.
From its start, the “U.S. criminal justice system” has advocated the idea of “checks and balances”. To avoid dictatorial rule, the people who founded this system in such a way that one person was not given control or authority completely to punish the criminals. The idea of assigning a ‘jury...
6 Pages (1500 words) Assignment
sponsored ads
Save Your Time for More Important Things
Let us write or edit the research paper on your topic "Expected US GDP Growth Rate Going Forward" with a personal 20% discount.
GRAB THE BEST PAPER

Let us find you another Research Paper on topic Expected US GDP Growth Rate Going Forward for FREE!