Comments (0)
Add to wishlistDelete from wishlist
Cite this document
Summary
Ford vs, Detroit Electric car The dream of developing an electric car has been pursued by different companies for many years. The debate on development of an electric car can be traced back to the agreement between Thomas Edison, and Henry Ford to work together in making electric car the main mode of transportation in America…
Download full paperFile format: .doc, available for editing
HIDE THIS PAPERGRAB THE BEST PAPER98.4% of users find it useful 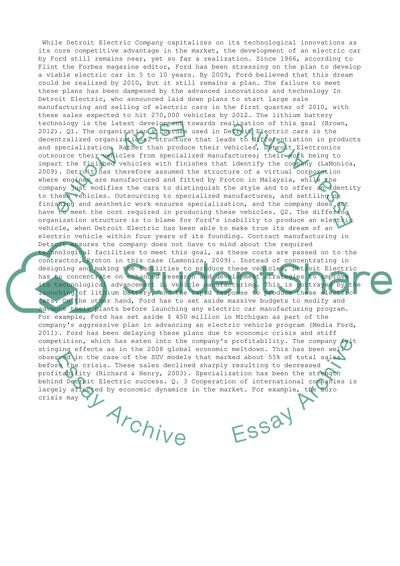 Download file to see previous pages While Detroit Electric Company capitalizes on its technological innovations as its core competitive advantage in the market, the development of an electric car by Ford still remains near, yet so far a realization. Since 1966, according to Flint the Forbes magazine editor, Ford has been stressing on the plan to develop a viable electric car in 5 to 10 years. By 2009, Ford believed that this dream could be realized by 2010, but it still remains a plan. The failure to meet these plans has been dampened by the advanced innovations and technology In Detroit Electric, who announced laid down plans to start large sale manufacturing and selling of electric cars in the first quarter of 2010, with these sales expected to hit 270,000 vehicles by 2012. The lithium battery technology is the latest development towards realization of this goal (Brown, 2012). Q1. The organization structure used in Detroit Electric cars is the decentralized organizational structure that leads to differentiation in products and specialization. Rather than produce their vehicles, Detroit Electronics outsource their vehicles from specialized manufactures; their work being to impart the finished vehicles with finishes that identify the company (LaMonica, 2009). Detroit has therefore assumed the structure of a virtual corporation where engines are manufactured and fitted by Proton in Malaysia, while the company just modifies the cars to distinguish the style and to offer an identity to these vehicles. Outsourcing to specialized manufactures, and settling on finishing and aesthetic work ensures specialization, and the company does not have to meet the cost required in producing these vehicles. Q2. The differing organization structure is to blame for Ford’s inability to produce an electric vehicle, when Detroit Electric has been able to make true its dream of an electric vehicle within four years of its founding. Contract manufacturing in Detroit ensures the company does not have to mind about the required technological facilities to meet this goal, as these costs are passed on to the contractor, Proton in this case (Lamonica, 2009). Instead of concentrating in designing and making the facilities to produce these vehicles, Detroit Electric has to concentrate on enhanced research and development strategies to improve its technological advancement in vehicle manufacturing. This is portrayed by the launching of lithium battery, and the rapid response to produce these electric cars. On the other hand, Ford has to set aside massive budgets to modify and advance their plants before launching any electric car manufacturing program. For example, Ford has set aside $ 450 million in Michigan as part of the company’s aggressive plan in advancing an electric vehicle program (Media Ford, 2011). Ford has been delaying these plans due to economic crisis and stiff competition, which has eaten into the company’s profitability. The company felt stinging effects as in the 2008 global economic meltdown. This has been well observed in the case of the SUV models that marked about 55% of total sales before the crisis. These sales declined sharply resulting to decreased profitability (Richard & Henry, 2003). Specialization has been the strength behind Detroit Electric success. Q. 3 Cooperation of international companies is largely affected by economic dynamics in the market. For example, the Euro crisis may ...Download file to see next pagesRead More
Share:
Tags
Cite this document
(“Ford vs Detroit Electric Car Case Study Example | Topics and Well Written Essays - 1000 words”, n.d.)
Ford vs Detroit Electric Car Case Study Example | Topics and Well Written Essays - 1000 words. Retrieved from https://studentshare.org/business/1444299-the-race-for-a-top-selling-electric-car-will
(Ford Vs Detroit Electric Car Case Study Example | Topics and Well Written Essays - 1000 Words)
Ford Vs Detroit Electric Car Case Study Example | Topics and Well Written Essays - 1000 Words. https://studentshare.org/business/1444299-the-race-for-a-top-selling-electric-car-will.
“Ford Vs Detroit Electric Car Case Study Example | Topics and Well Written Essays - 1000 Words”, n.d. https://studentshare.org/business/1444299-the-race-for-a-top-selling-electric-car-will.
Comments (0)
Click to create a comment or rate a document

CHECK THESE SAMPLES OF Ford vs Detroit Electric Car

The main differences between the approaches made by American society and the Barbarian society were the purpose behind the invasions. The American society invaded Afghanistan after facing violent attacks from the Islamic anti-social groups. However, the Barbarian invasions in Rome signified the use of power by the leaders in order to capture territories and increase their kingdom. The main purpose behind the attacks made by the U.S. administration was to eliminate the terrorist groups from the world and make the world free f...
10 Pages(2500 words)Essay
sponsored ads
Save Your Time for More Important Things
Let us write or edit the case study on your topic "Ford vs Detroit Electric Car" with a personal 20% discount.
GRAB THE BEST PAPER

Let us find you another Case Study on topic Ford vs Detroit Electric Car for FREE!