Comments (0)
Add to wishlist Delete from wishlist
Cite this document
Summary
The paper presents the economic factors that influenced on recession in the United Kingdom's economy. The 2008-2009 UK recession often referred by many individuals as the ”Global Recession” was instrumental in destabilizing the world economy as well as in the United Kingdom…
Download full paper File format: .doc, available for editing
HIDE THIS PAPERGRAB THE BEST PAPER93.4% of users find it useful 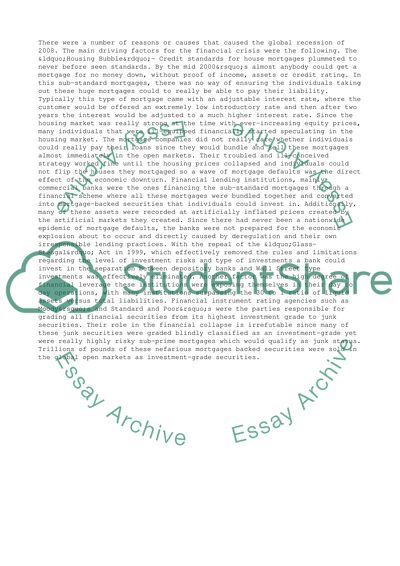 Download file to see previous pages There were a number of reasons or causes that caused the global recession of 2008. The main driving factors for the financial crisis were the following. The “Housing Bubble”- Credit standards for house mortgages plummeted to never before seen standards. By the mid 2000’s almost anybody could get a mortgage for no money down, without proof of income, assets or credit rating. In this sub-standard mortgages, there was no way of ensuring the individuals taking out these huge mortgages could to really be able to pay their liability. Typically this type of mortgage came with an adjustable interest rate, where the customer would be offered an extremely low introductory rate and then after two years the interest would be adjusted to a much higher interest rate. Since the housing market was really strong at the time with ever-increasing equity prices, many individuals that were ill-equipped financially started speculating in the housing market. The mortgage companies did not really care whether individuals could really pay their loans since they would bundle and sell these mortgages almost immediately in the open markets. Their troubled and ill-conceived strategy worked fine until the housing prices collapsed and individuals could not flip the houses they mortgaged so a wave of mortgage defaults was the direct effect of the economic downturn. Financial lending institutions, mainly commercial banks were the ones financing the sub-standard mortgages through a financial scheme where all these mortgages were bundled together and converted into mortgage-backed securities that individuals could invest in. Additionally, many of these assets were recorded at artificially inflated prices created by the artificial markets they created. Since there had never been a nationwide epidemic of mortgage defaults, the banks were not prepared for the economic explosion about to occur and directly caused by deregulation and their own irresponsible lending practices. With the repeal of the “Glass-Steagal” Act in 1999, which effectively removed the rules and limitations regarding the level of investment risks and type of investments a bank could invest in the separation between depository banks and Wall Street type investments was effectively eliminated. Another factor was the high degree of financial leverage these institutions were exposing themselves in their day to day operations, with many institutions surpassing the 30 to 1 ratio of liquid assets versus total liabilities. Financial instrument rating agencies such as Moody’s and Standard and Poor’s were the parties responsible for grading all financial securities from its highest investment grade to junk securities. Their role in the financial collapse is irrefutable since many of these junk securities were graded blindly classified as an investment-grade yet were really highly risky sub-prime mortgages which would qualify as junk status. Trillions of pounds of these nefarious mortgages backed securities were sold in the global open markets as investment-grade securities. ...Download file to see next pages Read More
Share:
Cite this document
(“Economics for Business: Individual Portfolio Research Paper”, n.d.)
Economics for Business: Individual Portfolio Research Paper. Retrieved from https://studentshare.org/business/1437447-economics-for-business-individual-portfolio

CHECK THESE SAMPLES OF Economics for Business - Individual Portfolio

...Introduction Globalization, one of the most hotly debated issues means global capitalism to some while others consider it to be the continuation of modernism with the forces of wealth, progress, democracy and happiness at play (Kellner, 2002). Globalization is considered to be beneficial which promotes economic prosperity, cultural diversity and technological advancement. According to the critical social theory, technology and capital work together to create a new globalized and interconnected world. While each force of globalization is important, technological revolution has impacted the business models, value creation and differentiation (Spelman, 2010). The cloud computing technologies that have made the popular social networking...
7 Pages (1750 words) Coursework
sponsored ads
Save Your Time for More Important Things
Let us write or edit the case study on your topic "Economics for Business - Individual Portfolio" with a personal 20% discount.
GRAB THE BEST PAPER

Let us find you another Case Study on topic Economics for Business - Individual Portfolio for FREE!