Comments (0)
Add to wishlist Delete from wishlist
Cite this document
Summary
ccording to the 2009 Nielsen Global Consumer Behaviour Research, 90 per cent of all buying decisions begin online. That means if a business don’t have a visible online presence, only 10 per cent of the market would consider it as an option…
Download full paper File format: .doc, available for editing
HIDE THIS PAPERGRAB THE BEST PAPER92.3% of users find it useful 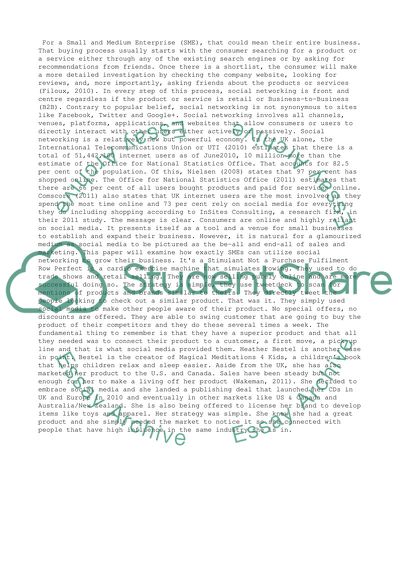 Download file to see previous pages For a Small and Medium Enterprise (SME), that could mean their entire business. That buying process usually starts with the consumer searching for a product or a service either through any of the existing search engines or by asking for recommendations from friends. Once there is a shortlist, the consumer will make a more detailed investigation by checking the company website, looking for reviews, and, more importantly, asking friends about the products or services (Filoux, 2010). In every step of this process, social networking is front and centre regardless if the product or service is retail or Business-to-Business (B2B). Contrary to popular belief, social networking is not synonymous to sites like Facebook, Twitter and Google+. Social networking involves all channels, venues, platforms, applications, and websites that allow consumers or users to directly interact with other users either actively or passively. Social networking is a relatively new but powerful economy. In the UK alone, the International Telecommunications Union or UTI (2010) estimates that there is a total of 51,442,100 internet users as of June2010, 10 million more than the estimate of the Office for National Statistics Office. That accounts for 82.5 per cent of the population. Of this, Nielsen (2008) states that 97 per cent has shopped online. The Office for National Statistics Office (2011) estimates that there are 66 per cent of all users bought products and paid for services online. Comscore (2011) also states that UK internet users are the most involved as they spend the most time online and 73 per cent rely on social media for everything they do including shopping according to InSites Consulting, a research firm, in their 2011 study. The message is clear. Consumers are online and highly reliant on social media. It presents itself as a tool and a venue for small businesses to establish and expand their business. However, it is natural for a glamourized medium as social media to be pictured as the be-all and end-all of sales and marketing. This paper will examine how exactly SMEs can utilize social networking to grow their business. It’s a Stimulant Not a Purchase Fulfilment Row Perfect is a cardio exercise machine that simulates rowing. They used to do trade shows and retail selling. They are now selling purely online and are more successful doing so. The strategy is simple, they use tweetdeck to scan for mentions of products and brands similar to theirs. They directly tweet the people looking to check out a similar product. That was it. They simply used social media to make other people aware of their product. No special offers, no discounts are offered. They are able to swing customer that are going to buy the product of their competitors and they do these several times a week. The fundamental thing to remember is that they have a superior product and that all they needed was to connect their product to a customer, a first move, a pick-up line and that is what social media provided them. Heather Bestel is another case in point. Bestel is the creator of Magical Meditations 4 Kids, a children’s book that helps children relax and sleep easier. Aside from the UK, she has also marketed her product to the U.S. and Canada. Sales have been steady but not enough for her to make a living off her product (Wakeman, 2011). She decided to embrace social media and she landed a publishing deal that launched her CDs in UK and Europe in 2010 and eventually in other markets like US & Canada and Australia/New Zealand. She is also being offered to license her brand to develop items like toys and apparel. Her strategy was simple. She knew she had a great product and she simply needed the market to notice it so she connected with people that have high influence in the same industry she is in. ...Download file to see next pages Read More
Share:
Tags
Cite this document
(“Social Networking and SME's Literature review Example | Topics and Well Written Essays - 1750 words”, n.d.)
Social Networking and SME's Literature review Example | Topics and Well Written Essays - 1750 words. Retrieved from https://studentshare.org/business/1436579-a

CHECK THESE SAMPLES OF Social Networking and SME's

Erving Goffman was an astute observer of society, who immersed himself in the social environment which he was studying. He carefully observed and recorded the ways in which people’s behavior and interpersonal interactions are carried out in everyday life. He notes that “people perform their social roles and, as they do so, they produce social order through their actions and the regu...
6 Pages (1500 words) Article
sponsored ads
Save Your Time for More Important Things
Let us write or edit the literature review on your topic "Social Networking and SME's" with a personal 20% discount.
GRAB THE BEST PAPER

Let us find you another Literature review on topic Social Networking and SME's for FREE!