Comments (0)
Add to wishlistDelete from wishlist
Cite this document
Summary
The paper focuses on communication which is one of the vital aspects of successful leadership. Majority of leaders’ tasks is based on communication with the followers. Communication results in the good leader-follower relationship which is vital for organizational effectiveness…
Download full paperFile format: .doc, available for editing
HIDE THIS PAPERGRAB THE BEST PAPER95% of users find it useful 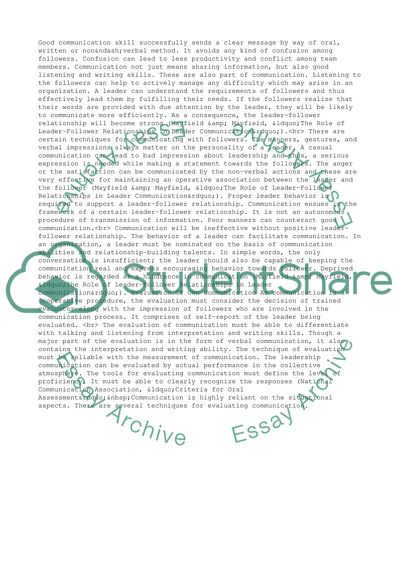 Download file to see previous pages Good communication skill successfully sends a clear message by way of oral, written or non–verbal method. It avoids any kind of confusion among followers. Confusion can lead to less productivity and conflict among team members. Communication not just means sharing information, but also good listening and writing skills. These are also part of communication. Listening to the followers can help to actively manage any difficulty which may arise in an organization. A leader can understand the requirements of followers and thus effectively lead them by fulfilling their needs. If the followers realize that their words are provided with due attention by the leader, they will be likely to communicate more efficiently. As a consequence, the leader-follower relationship will become strong (Mayfield & Mayfield, “The Role of Leader-Follower Relationships in Leader Communication”).
There are certain techniques for communicating with followers. The manners, gestures, and verbal impressions always matter on the personality of a leader. A casual communication can lead to bad impression about leadership and thus, a serious expression is needed while making a statement towards the followers. The anger or the satisfaction can be communicated by the non-verbal actions and these are very effective for maintaining an operative association between the leader and the follower (Mayfield & Mayfield, “The Role of Leader-Follower Relationships in Leader Communication”). Proper leader behavior is required to support a leader-follower relationship. Communication ensues in the framework of a certain leader-follower relationship. It is not an autonomous procedure of transmission of information. Poor manners can counteract good communication.
Communication will be ineffective without positive leader-follower relationship. The behavior of a leader can facilitate communication. In an organization, a leader must be nominated on the basis of communication abilities and relationship-building talents. In simple words, the only conversation is insufficient; the leader should also be capable of keeping the communication real and express encouraging behavior towards follower. Deprived behavior is regarded as a hindrance in communication (Mayfield & Mayfield, “The Role of Leader-Follower Relationships in Leader Communication”). Evaluation Of Own Communication As communication is a cooperative procedure, the evaluation must consider the decision of trained evaluator along with the impression of followers who are involved in the communication process. It comprises of self-report of the leader being evaluated.
The evaluation of communication must be able to differentiate with talking and listening from interpretation and writing skills. Though a major part of the evaluation is in the form of verbal communication, it also contains the interpretation and writing ability. The technique of evaluation must be reliable with the measurement of communication. The leadership communication can be evaluated by actual performance in the collective atmosphere. The tools for evaluating communication must define the level of proficiency. It must be able to clearly recognize the responses (National Communication Association, “Criteria for Oral Assessment” Communication is highly reliant on the situational aspects. There are several techniques for evaluating communication. ...Download file to see next pagesRead More
Share:
Tags
Cite this document
(“Importance of Communication Research Paper Example | Topics and Well Written Essays - 2000 words”, n.d.)
Retrieved from https://studentshare.org/business/1431434-importance-of-communication

... an income, poverty and the cultural ramifications derived from the Arab and Islamic culture for adhering strictly to the traditional without daring to be different constricts positive thinking and new ideas. The French colonial heritage did not help because the French administrators put in place an education system that was designed to “provide a child of a certain milieu with education that is adapted to the milieu, to keep the child there and to assist the child to fulfil his social role, however humble it might be” (Segalla, 2009, Pp. 94). Thus, the education system in Morocco was designed to only teach individuals what they had a need to know to maintain their social status, without any designs for improvement or social mobility...
15 Pages(3750 words)Research Proposal

... in society but I believe that our ideas about the family need to evolve and change with time. I believe that women should have to work outside of the home if they choose to but also feel that the father’s place at the head of the household needs to be assured. I am a little confused with this one because I want to say that total equality is best but I also believe that Indo-Chinese society can teach the West a little bit about how different sexes relate to one another. There is far less tension and conflict in the culture that I grew up in. I know that honesty is very important and understand it to be a very good virtue. This is another value that I agree with (Cole, 1997; Yip, 2000; Indonesia, 2009)). Communication Style...
7 Pages(1750 words)Essay

Communication is part of everyday life. It is not limited to adults or learned individuals. Babies communicate with their mothers as they cry when they are hungry, the mute use sign language to express what they want to say, while the mentally disabled laugh when they are happy or excited. The forms of communication people use may vary but common elements are usually present. These include the message and the communicators or the participants who play the role of either the sender or receiver of the message. In the communication situation, I had with my friend, these common features were present along with others namely, feedback, noise, context, and mutual agreement/negotiation. These elements affected the outcome of the conversa...
12 Pages(3000 words)Case Study
sponsored ads
Save Your Time for More Important Things
Let us write or edit the term paper on your topic "Cross Cultural Communication Needs" with a personal 20% discount.
GRAB THE BEST PAPER

Let us find you another Term Paper on topic Cross Cultural Communication Needs for FREE!