Comments (1)
Add to wishlistDelete from wishlist
Cite this document
Summary
The following case study "Business Environment in China" casts light on the globalization of business operations that has been intensified due to enhanced communication, as well as a reduction in the barriers among different countries relating to financial, political, cultural and societal factors. …
Download full paperFile format: .doc, available for editing
HIDE THIS PAPERGRAB THE BEST PAPER93.6% of users find it useful 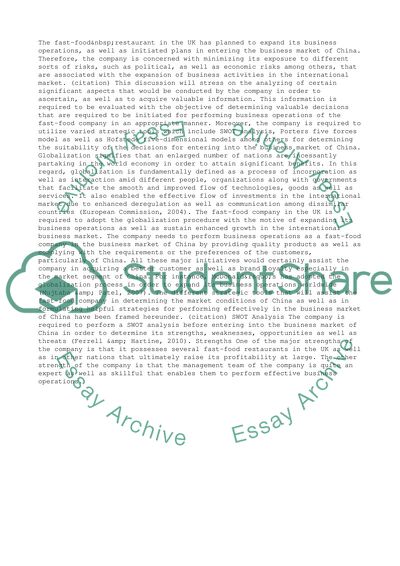 Download file to see previous pages The fast-food restaurant in the UK has planned to expand its business operations, as well as initiated plans in entering the business market of China. Therefore, the company is concerned with minimizing its exposure to different sorts of risks, such as political, as well as economic risks among others, that are associated with the expansion of business activities in the international market. (citation) This discussion will stress on the analyzing of certain significant aspects that would be conducted by the company in order to ascertain, as well as to acquire valuable information. This information is required to be evaluated with the objective of determining valuable decisions that are required to be initiated for performing business operations of the fast-food company in an appropriate manner. Moreover, the company is required to utilize varied strategic tools which include SWOT analysis, Porters five forces model as well as Hofstede five-dimensional models among others for determining the suitability of the decisions for entering into the business market of China. Globalization signifies that an enlarged number of nations are incessantly partaking in the world economy in order to attain significant benefits. In this regard, globalization is fundamentally defined as a process of incorporation as well as interaction amid different people, organizations along with governments that facilitate the smooth and improved flow of technologies, goods as well as services. It also enabled the effective flow of investments in the international market due to enhanced deregulation as well as communication among dissimilar countries (European Commission, 2004). The fast-food company in the UK is required to adopt the globalization procedure with the motive of expanding its business operations as well as sustain enhanced growth in the international business market. The company needs to perform business operations as a fast-food company in the business market of China by providing quality products as well as complying with the requirements or the preferences of the customers, particularly of China. All these major initiatives would certainly assist the company in acquiring a better customer as well as brand loyalty especially in the market segment of China. For instance, McDonald’s has adopted the globalization process in order to expand its business operations worldwide (Mujtaba & Patel, 2007). The different strategic tools that will assist the fast-food company in determining the market conditions of China as well as in formulating helpful strategies for performing effectively in the business market of China have been framed hereunder. (citation) SWOT Analysis The company is required to perform a SWOT analysis before entering into the business market of China in order to determine its strengths, weaknesses, opportunities as well as threats (Ferrell & Hartine, 2010). Strengths One of the major strengths of the company is that it possesses several fast-food restaurants in the UK as well as in other nations that ultimately raise its profitability at large. The other strength of the company is that the management team of the company is quite an expert as well as skillful that enables them to perform effective business operations. ...Download file to see next pagesRead More
Share:
Tags
Cite this document
(“Individual Report - Fast Food Case Context Essay”, n.d.)
Individual Report - Fast Food Case Context Essay. Retrieved from https://studentshare.org/business/1403720-individual-report-fast-food-case-context
(Individual Report - Fast Food Case Context Essay)
Individual Report - Fast Food Case Context Essay. https://studentshare.org/business/1403720-individual-report-fast-food-case-context.
“Individual Report - Fast Food Case Context Essay”, n.d. https://studentshare.org/business/1403720-individual-report-fast-food-case-context.
Comments (1)
Click to create a comment or rate a document

el
eleonorebeatty added comment 1 year ago
Student rated this paper as
I didn’t know how to start my document. "Business Environment in China" helped me out a lot! Especially the list of closing part was valuable.

CHECK THESE SAMPLES OF Business Environment in China

An ethical scenario arose during my first six months in this management role involving a 21-year-old employee who I witnessed smoking pot in the parking lot over lunch break. This scenario demanded that I consider the needs of the employee, as well as satisfying my obligations for enforcing the strict drug use policy administered at the senior levels of the company. This project describes the ethical scenario in detail, offering personal reflections on the incident as well as suggesting an ethical framework for handling situations like this in the future.
The situation which occurred had a young worker smoking pot on his lunch break on the company grounds. This, according to policy, is a termination offense and it is expected...
7 Pages(1750 words)Case Study
sponsored ads
Save Your Time for More Important Things
Let us write or edit the case study on your topic "Business Environment in China" with a personal 20% discount.
GRAB THE BEST PAPER

Let us find you another Case Study on topic Business Environment in China for FREE!