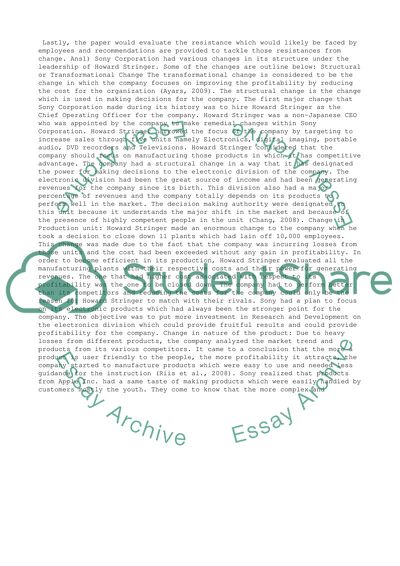 Download file to see previous pages Lastly, the paper would evaluate the resistance which would likely be faced by employees and recommendations are provided to tackle those resistances from change. Ans1) Sony Corporation had various changes in its structure under the leadership of Howard Stringer. Some of the changes are outline below: Structural or Transformational Change The transformational change is considered to be the change in which the company focuses on improving the profitability by reducing the cost for the organization (Ayars, 2009). The structural change is the change which is used in making decisions for the company. The first major change that Sony Corporation made during its history was to hire Howard Stringer as the Chief Operating Officer for the company. Howard Stringer was a non-Japanese CEO who was appointed by the company to make remedial changes within Sony Corporation. Howard Stringer narrowed the focus of the company by targeting to increase sales through five units namely Electronics, digital imaging, portable audio, DVD recorders and Televisions. Howard Stringer considered that the company should focus on manufacturing those products in which it has competitive advantage. The company had a structural change in a way that it has designated the power for making decisions to the electronic division of the company. The electronic division had been the great source of income and had been generating revenues for the company since its birth. This division also had a major percentage of revenues and the company totally depends on its products to perform well in the market. The decision making authority were designated to this unit because it understands the major shift in the market and because of the presence of highly competent people in the unit (Chang, 2008). Change in Production unit: Howard Stringer made an enormous change to the company when he took a decision to close down 11 plants which had lain off 10,000 employees. This change was made due to the fact that the company was incurring losses from those units and the cost had been exceeded without any gain in profitability. In order to become efficient in its production, Howard Stringer evaluated all the manufacturing plants with their respective costs and their power for generating revenues. The one that had higher cost associated with respect to its profitability was the one to be closed down. The company had to perform better than its competitors and reducing the costs for the company could only be the reason for Howard Stringer to match with their rivals. Sony had a plan to focus on its electronic products which had always been the stronger point for the company. The objective was to put more investment in Research and Development on the electronics division which could provide fruitful results and could provide profitability for the company. Change in nature of the product: Due to heavy losses from different products, the company analyzed the market trend and products from its various competitors. It came to a conclusion that the more a product is user friendly to the people, the more profitability it attracts, the company started to manufacture products which were easy to use and needed less guidance for the instruction (Riis et al., 2008). Sony realized that products from Apple Inc. had a same taste of making products which were easily handled by customers mostly the youth. They come to know that the more complex and ...Download file to see next pagesRead More
Share:
Tags
Cite this document
(“Saving Sony: Case Study Analysis Assignment Example | Topics and Well Written Essays - 3000 words”, n.d.)
Saving Sony: Case Study Analysis Assignment Example | Topics and Well Written Essays - 3000 words. Retrieved from https://studentshare.org/business/1400840-organisation-behaviour
(Saving Sony: Case Study Analysis Assignment Example | Topics and Well Written Essays - 3000 Words)
Saving Sony: Case Study Analysis Assignment Example | Topics and Well Written Essays - 3000 Words. https://studentshare.org/business/1400840-organisation-behaviour.
“Saving Sony: Case Study Analysis Assignment Example | Topics and Well Written Essays - 3000 Words”, n.d. https://studentshare.org/business/1400840-organisation-behaviour.
Comments (0)
Click to create a comment or rate a document

Financial statement analysis consists of the application of a...
7 Pages(1750 words)Case Study

In th...
8 Pages(2000 words)Case Study
sponsored ads
Save Your Time for More Important Things
Let us write or edit the assignment on your topic "Saving Sony: Case Study Analysis" with a personal 20% discount.
GRAB THE BEST PAPER

Let us find you another Assignment on topic Saving Sony: Case Study Analysis for FREE!