Comments (0)
Add to wishlist Delete from wishlist
Cite this document
Summary
International Business Introduction The US is passing through a great economic crisis with high unemployment rate averaging between 8-9 percent for last 4 years. In spite of several efforts by US Federal in terms of monetary and fiscal measures, the economy has not shown any signs of improvement…
Download full paper File format: .doc, available for editing
HIDE THIS PAPERGRAB THE BEST PAPER95.8% of users find it useful 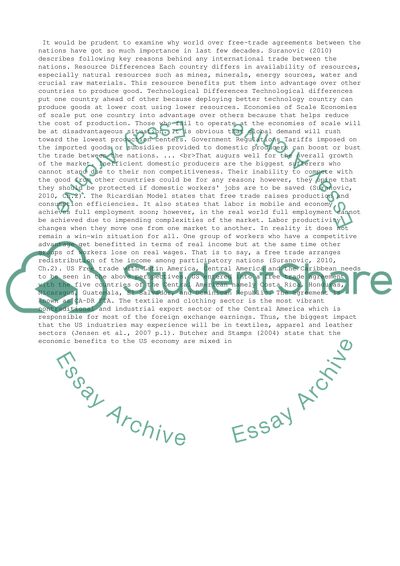 Download file to see previous pages It would be prudent to examine why world over free-trade agreements between the nations have got so much importance in last few decades. Suranovic (2010) describes following key reasons behind any international trade between the nations. Resource Differences Each country differs in availability of resources, especially natural resources such as mines, minerals, energy sources, water and crucial raw materials. This resource benefits put them into advantage over other countries to produce good. Technological Differences Technological differences put one country ahead of other because deploying better technology country can produce goods at lower cost using lower resources. Economies of Scale Economies of scale put one country into advantage over others because that helps reduce the cost of production. Those who fail to operate at the economies of scale will be at disadvantageous situation. It is obvious that global demand will rush toward the lowest production centers. Government Regulations Tariffs imposed on the imported goods or subsidies provided to domestic producers can boost or bust the trade between the nations. ...
That augurs well for the overall growth of the market. Inefficient domestic producers are the biggest sufferers who cannot stand due to their non competitiveness. Their inability to compete with the good from other countries could be for any reason; however, they opine that they should be protected if domestic workers’ jobs are to be saved (Suranovic, 2010, Ch.2). The Ricardian Model states that free trade raises production and consumption efficiencies. It also states that labor is mobile and economy achieves full employment soon; however, in the real world full employment cannot be achieved due to impending complexities of the market. Labor productivity changes when they move one from one market to another. In reality it does not remain a win-win situation for all. One group of workers who have a competitive advantage get benefitted in terms of real income but at the same time other groups of workers lose on real wages. That is to say, a free trade arranges redistribution of the income among participatory nations (Suranovic, 2010, Ch.2). US Free trade with Latin America, Central America and the Caribbean needs to be seen in the above perspectives. US entered into a free trade agreement with the five countries of the Central American namely Costa Rica, Honduras, Nicaragua, Guatemala, El Salvador, and Dominican Republic. The agreement is known as CA-DR FTA. The textile and clothing sector is the most vibrant nontraditional and industrial export sector of the Central America which is responsible for most of the foreign exchange earnings. Thus, the biggest impact that the US industries may experience will be in textiles, apparel and leather sectors (Jensen et al., 2007 p.1). Butcher and Stamps (2004) state that the economic benefits to the US economy are mixed in ...Download file to see next pages Read More
Share:
Tags
Cite this document
(“International business Essay Example | Topics and Well Written Essays - 1000 words”, n.d.)
Retrieved from https://studentshare.org/business/1399006-international-business

CHECK THESE SAMPLES OF International business

As a matter of fact, Hoffman’s statement that “international affairs is the nemesis of liberalism” has a grain of truth in it and this is especially so after the 9/11 incident.
There are two schools of thought or perspectives that are used to view international affairs: liberalism and realism. The study of these two perspectives is significant to the idea posed by Stanley Hoffman because they determine the reasons why international affairs, according to him, does not only see eye-to-eye with liberalism but seems to stand on the opposing side of it.
Liberalism can be defined as having four elements: citizens; the legislature; property rights, and; a market-driven economy (Dunne 186). Realism, on the othe...
6 Pages (1500 words) Assignment
sponsored ads
Save Your Time for More Important Things
Let us write or edit the essay on your topic "International business" with a personal 20% discount.
GRAB THE BEST PAPER

Let us find you another Essay on topic International business for FREE!