Comments (0)
Add to wishlist Delete from wishlist
Cite this document
Summary
The strategic analysis performed on the company included SWOT analysis, porters five forces analysis, financial analysis and competitor’s analysis. The four analyses were adequate to address the different strategies of the company and enabled us derive recommendations on how the company can address its problems (Ramaswamy, 2009, p. 2). …
Download full paper File format: .doc, available for editing
HIDE THIS PAPERGRAB THE BEST PAPER92.9% of users find it useful 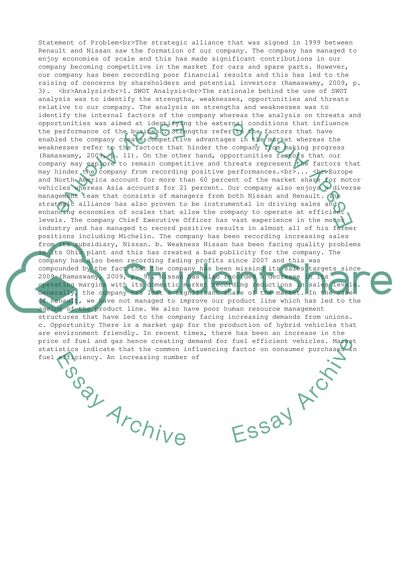 Download file to see previous pages Statement of Problem
The strategic alliance that was signed in 1999 between Renault and Nissan saw the formation of our company. The company has managed to enjoy economies of scale and this has made significant contributions in our company becoming competitive in the market for cars and spare parts. However, our company has been recording poor financial results and this has led to the raising of concerns by shareholders and potential investors (Ramaswamy, 2009, p. 3).
Analysis
1. SWOT Analysis
The rationale behind the use of SWOT analysis was to identify the strengths, weaknesses, opportunities and threats relative to our company. The analysis on strengths and weaknesses was to identify the internal factors of the company whereas the analysis on threats and opportunities was aimed at identifying the external conditions that influence the performance of the business. Strengths refer to the factors that have enabled the company create competitive advantages in the market whereas the weaknesses refer to the factors that hinder the company from making progress (Ramaswamy, 2009, p. 11). On the other hand, opportunities factors that our company may explore to remain competitive and threats represent the factors that may hinder the company from recording positive performances.
...
Europe and North America account for more than 60 percent of the market share for motor vehicles whereas Asia accounts for 21 percent. Our company also enjoys a diverse management team that consists of managers from both Nissan and Renault. The strategic alliance has also proven to be instrumental in driving sales and enhancing economies of scales that allow the company to operate at efficient levels. The company Chief Executive Officer has vast experience in the motor industry and has managed to record positive results in almost all of his former positions including Michelin. The company has been recording increasing sales from its subsidiary, Nissan. b. Weakness Nissan has been facing quality problems in its Ohio plant and this has created a bad publicity for the company. The company has also been recording fading profits since 2007 and this was compounded by the fact that the company has been missing its sales targets since 2009 (Ramaswamy, 2009, p. 9). Nissan has also recorded a decrease in its operating margins with its domestic market recording reductions in sales levels. Generally, the company has lost a significant share of the market. In the case of Renault, we have not managed to improve our product line which has led to the ageing of the product line. We also have poor human resource management structures that have led to the company facing increasing demands from unions. c. Opportunity There is a market gap for the production of hybrid vehicles that are environment friendly. In recent times, there has been an increase in the price of fuel and gas hence creating demand for fuel efficient vehicles. Market statistics indicate that the common influencing factor on consumer purchases in fuel efficiency. An increasing number of ...Download file to see next pages Read More
Share:
Tags
Cite this document
(“Renault-Nissan Strategic Analysis Case Study Example | Topics and Well Written Essays - 2750 words”, n.d.)
Retrieved from https://studentshare.org/business/1398206-renault-nissan-strategic-analysis

The role of CFD in this contemporary technological world is crucial. It assists in the path of the global world of Computer Assisted Engineering or CAE that refers to the ensemble of simulation tools that support the work of engineers between the initial design phase and the final definition of the manufacturing process. The industrial production process uses various software tools for computerization of the whole production cycle. Among those tools, the most important is Computer-Assisted...
6 Pages (1500 words) Report

For Yeats, Byzantium represented the highest ideals in art, spirituality, and knowledge, a kind of heavenly realm in which nothing ever changes but remains perfectly representative of the inner essence of art, beauty and spirituality. This is a city that cannot be conceived of by the average mortal and can indeed only be partially grasped in partial form by a living poet in the throes of vision. However, it is a land for human spirits, a place where they can throw off the “complexities” of life in favor of the eternal purity that is housed here. Without knowing anything at all about the conception of Yeats, but merely relying on the evidence provided within the text of the poem itself, it is possible to grasp this conc...
8 Pages (2000 words) Essay

Advantages: The primary advantage of this scheme is the inducement and motivation of workers for higher efficiency and great output. It is better th...
6 Pages (1500 words) Assignment

In th...
8 Pages (2000 words) Case Study
sponsored ads
Save Your Time for More Important Things
Let us write or edit the case study on your topic "Renault-Nissan Strategic Analysis" with a personal 20% discount.
GRAB THE BEST PAPER

Let us find you another Case Study on topic Renault-Nissan Strategic Analysis for FREE!