The Business of War and Terrorism - Coursework Example

Comments (1)
Add to wishlist Delete from wishlist
Cite this document
Summary
The paper "The Business of War and Terrorism" discusses that since Al-Qaeda attacked the Twin Towers in New York City on 9/11/2001, the amount of money/resources spent in the global fight against terror has consistently increased in the last one decade. …
Download full paper File format: .doc, available for editing
HIDE THIS PAPERGRAB THE BEST PAPER92.7% of users find it useful 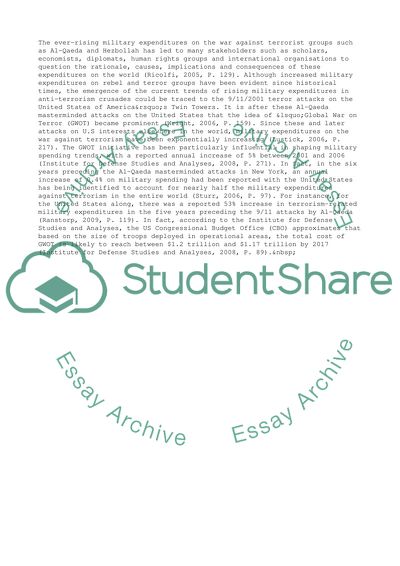 Extract of sample "The Business of War and Terrorism"

Download file to see previous pages The ever-rising military expenditures on the war against terrorist groups such as Al-Qaeda and Hezbollah has led to many stakeholders such as scholars, economists, diplomats, human rights groups and international organisations to question the rationale, causes, implications and consequences of these expenditures on the world (Ricolfi, 2005, P. 129). Although increased military expenditures on rebel and terror groups have been evident since historical times, the emergence of the current trends of rising military expenditures in anti-terrorism crusades could be traced to the 9/11/2001 terror attacks on the United States of America’s Twin Towers. It is after these Al-Qaeda masterminded attacks on the United States that the idea of ‘Global War on Terror (GWOT) became prominent (Wright, 2006, P. 159). Since these and later attacks on U.S interests elsewhere in the world, military expenditures on the war against terrorism have been exponentially increasing (Lustick, 2006, P. 217). The GWOT initiative has been particularly influential in shaping military spending trends, with a reported annual increase of 5% between 2001 and 2006 (Institute for Defense Studies and Analyses, 2008, P. 271). In fact, in the six years preceding the Al-Qaeda masterminded attacks in New York, an annual increase of 0.4% on military spending had been reported with the United States has being identified to account for nearly half the military expenditures against terrorism in the entire world (Sturr, 2006, P. 97). For instance, for the United States along, there was a reported 53% increase in terrorism-related military expenditures in the five years preceding the 9/11 attacks by Al-Qaeda (Ranstorp, 2009, P. 119). In fact, according to the Institute for Defense Studies and Analyses, the US Congressional Budget Office (CBO) approximates that based on the size of troops deployed in operational areas, the total cost of GWOT is likely to reach between $1.2 trillion and $1.17 trillion by 2017 (Institute for Defense Studies and Analyses, 2008, P. 89).  ...Download file to see next pages Read More
Share:
Tags
Cite this document
(“The world has become increasingly more militarized Essay”, n.d.)
Retrieved from https://studentshare.org/business/1397862-the-business-of-war-and-terrorism

“The World Has Become Increasingly More Militarized Essay”, n.d. https://studentshare.org/business/1397862-the-business-of-war-and-terrorism.
Comments (1)
Click to create a comment or rate a document

ha
hardy54 added comment 1 year ago
Student rated this paper as
This coursework was always my weak point. I could never finish it well. Still, after I found this precise paper, I understood how it should be completed. So, I performed my research afterward and completed the coursework in several hours, instead of days as it was previously.

CHECK THESE SAMPLES OF The Business of War and Terrorism

On the other hand, these globalization standards are opposed by some critics and argue that globalization does not have to be a requirement for putting up a business in other countries, thus it is just a choice for entering a foreign market. Accordingly, standardization is applicable specifically to high-end markets and with accord to the market segmentation such as the trends that the young people patronize (Mullman, 2006) Regardless of the idea that globalization is mostly based on how the company standardizes the products, the home country still holds the profitability of the business as the economy affects how the foreign investors and other national sources back up the business (Stiglitz, 2006).
Making the world flat mak...
9 Pages (2250 words) Assignment
sponsored ads
Save Your Time for More Important Things
Let us write or edit the coursework on your topic "The Business of War and Terrorism" with a personal 20% discount.
GRAB THE BEST PAPER

Let us find you another Coursework on topic The Business of War and Terrorism for FREE!