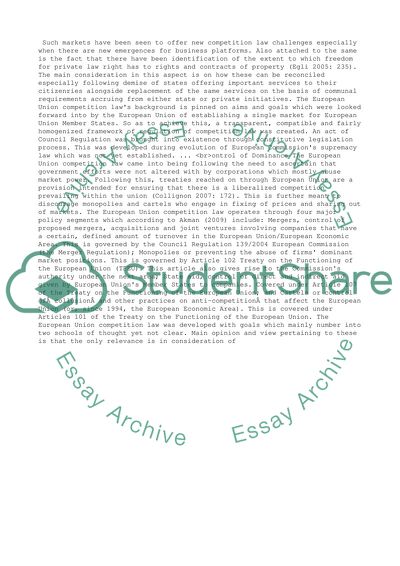 Download file to see previous pages Such markets have been seen to offer new competition law challenges especially when there are new emergences for business platforms. Also attached to the same is the fact that there have been identification of the extent to which freedom for private law right has to rights and contracts of property (Egli 2005: 235). The main consideration in this aspect is on how these can be reconciled especially following demise of states offering important services to their citizenries alongside replacement of the same services on the basis of communal requirements accruing from either state or private initiatives. The European Union competition law’s background is pinned on aims and goals which were looked forward into by the European Union of establishing a single market for European Union Member States. So as to achieve this, a transparent, compatible and fairly homogenized framework of regulation of competition law was created. An act of Council Regulation was brought into existence through constitutive legislation process. This was developed during evolution of European Commission’s supremacy law which was not yet established. ...
ontrol of Dominance The European Union competition law came into being following the need to ascertain that government efforts were not altered with by corporations which mostly abuse market power. Following this, treaties reached on through European Union are a provision intended for ensuring that there is a liberalized competition prevailing within the union (Collignon 2007: 172). This is further meant to discourage monopolies and cartels who engage in fixing of prices and sharing out of markets. The European Union competition law operates through four major policy segments which according to Akman (2009) include: Mergers, control of proposed mergers, acquisitions and joint ventures involving companies that have a certain, defined amount of turnover in the European Union/European Economic Area. This is governed by the Council Regulation 139/2004 European Commission (the Merger Regulation); Monopolies or preventing the abuse of firms' dominant market positions. This is governed by Article 102 Treaty on the Functioning of the European Union (TFEU). This article also gives rise to the Commission’s authority under the next area; State aid, control of direct and indirect aid given by European Union’s Member States to companies. Covered under Article 107 of the Treaty on the Functioning of the European Union; and Cartels or control of collusion and other practices on anti-competition that affect the European Union (or, since 1994, the European Economic Area). This is covered under Articles 101 of the Treaty on the Functioning of the European Union. The European Union competition law was developed with goals which mainly number into two schools of thought yet not clear. Main opinion and view pertaining to these is that the only relevance is in consideration of ...Download file to see next pages Read More
Share:
Tags
Cite this document
(“EUROPEAN BUSINESS ENVIRONMENT-Competition Essay”, n.d.)
Retrieved from https://studentshare.org/business/1396708-european-business-environment-competition

An ethical scenario arose during my first six months in this management role involving a 21-year-old employee who I witnessed smoking pot in the parking lot over lunch break. This scenario demanded that I consider the needs of the employee, as well as satisfying my obligations for enforcing the strict drug use policy administered at the senior levels of the company. This project describes the ethical scenario in detail, offering personal reflections on the incident as well as suggesting an ethical framework for handling situations like this in the future.
The situation which occurred had a young worker smoking pot on his lunch break on the company grounds. This, according to policy, is a termination offense and it is expected...
7 Pages (1750 words) Case Study
sponsored ads
Save Your Time for More Important Things
Let us write or edit the essay on your topic "EUROPEAN BUSINESS ENVIRONMENT-Competition" with a personal 20% discount.
GRAB THE BEST PAPER

Let us find you another Essay on topic EUROPEAN BUSINESS ENVIRONMENT-Competition for FREE!