Comments (0)
Add to wishlistDelete from wishlist
Cite this document
Summary
This research is being carried out to evaluate and present an analysis of a successful fast food restaurants business strategy according to "Al Baik". The fast food market in Saudi Arabia is estimated to grow at a high rate making the big players grow even bigger…
Download full paperFile format: .doc, available for editing
HIDE THIS PAPERGRAB THE BEST PAPER93.2% of users find it useful 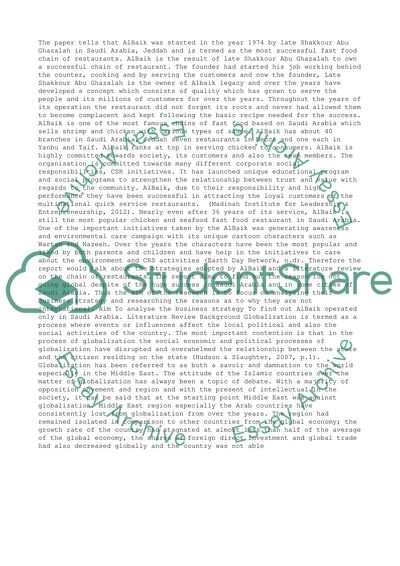 Download file to see previous pages The paper tells that AlBaik was started in the year 1974 by late Shakkour Abu Ghazalah in Saudi Arabia, Jeddah and is termed as the most successful fast food chain of restaurants. AlBaik is the result of late Shakkour Abu Ghazalah to own a successful chain of restaurant. The founder had started his job working behind the counter, cooking and by serving the customers and now the founder, Late Shakkour Abu Ghazalah is the owner of Albaik legacy and over the years have developed a concept which consists of quality which has grown to serve the people and its millions of customers for over the years. Throughout the years of its operation the restaurant did not forget its roots and never had allowed them to become complacent and kept following the basic recipe needed for the success. AlBaik is one of the most famous chains of fast food based on Saudi Arabia which sells shrimp and chicken with various types of sauce. AlBaik has about 40 branches in Saudi Arabia, Jeddah seven restaurants in Mecca and one each in Yanbu and Taif. AlBaik ranks at top in serving chicken to consumers. AlBaik is highly committed towards society, its customers and also the team members. The organisation is committed towards many different corporate social responsibilities, CSR initiatives. It has launched unique educational program and social programs to strengthen the relationship between trust and value with regards to the community. AlBaik, due to their responsibility and high performance they have been successful in attracting the loyal customers of the multinational quick service restaurants. (Madinah Institute for Leadership & Entrepreneurship, 2012). Nearly even after 36 years of its service, AlBaik is still the most popular chicken and seafood fast food restaurant in Saudi Arabia. One of the important initiatives taken by the AlBaik was generating awareness and environmental care campaign with its unique cartoon characters such as Wartan and Nazeeh. Over the years the characters have been the most popular and liked by both parents and children and have help in the initiatives to care about the environment and CRS activities (Earth Day Network, n.d). Therefore the report would talk about the strategies adopted by AlBaik and a literature review on the chain of restaurants. The report aims to find out the reason for not going global despite of the huge success in Saudi Arabia and in some cities of Saudi Arabia. Thus the aim of the research is to focus on analysing their business strategy and researching the reasons as to why they are not international. Aim To analyse the business strategy To find out AlBaik operated only in Saudi Arabia. Literature Review Background Globalization is termed as a process where events or influences affect the local political and also the social activities of the country. The most important contention is that in the process of globalization the social economic and political processes of globalization have disrupted and overwhelmed the relationship between the state and the citizen residing on the state (Hudson & Slaughter, 2007, p.1). Globalization has been referred to as both a savoir and damnation to the world especially in the Middle East. The attitude of the Islamic countries over the matter of globalization has always been a topic of debate. With a majority of opposition movement and region and with the present of intellectual in the society, it can be said that at the starting point Middle East was against globalization. Middle East region especially the Arab countries have consistently lost from globalization from over the years. The region had remained isolated in comparison to other countries from the global economy; the growth rate of the country had stagnated at almost less than half of the average of the global economy, the shares of foreign direct investment and global trade had also decreased globally and the country was not able ...Download file to see next pagesRead More
Share:
Tags
Cite this document
(“An Analysis of a Successful Fast Food Restaurants Business Strategy: Literature review”, n.d.)
Retrieved from https://studentshare.org/business/1395408-an-analysis-of-a-successful-fast-food-restaurants-business-strategy-albaik
(An Analysis of a Successful Fast Food Restaurants Business Strategy: Literature Review)
https://studentshare.org/business/1395408-an-analysis-of-a-successful-fast-food-restaurants-business-strategy-albaik.
“An Analysis of a Successful Fast Food Restaurants Business Strategy: Literature Review”, n.d. https://studentshare.org/business/1395408-an-analysis-of-a-successful-fast-food-restaurants-business-strategy-albaik.
Comments (0)
Click to create a comment or rate a document

CHECK THESE SAMPLES OF An Analysis of a Successful Fast Food Restaurants Business Strategy: AlBaik

Napoleon’s strategic styles and unique approach of governance have been used in different ways by rulers across the world not only to keep the civilians of their respective nations under their control but at the same time, his strategic approaches proved to be sources of great inspiration for all those leaders who wished to receive an upper hand over the existing governing systems of other nations. It has always been a matter of great surprise for diplomats, politicians and strategy makers across the world to date that how within such a short period of time and at such a small age he has been able to receive such a huge rate of success. The same note of surprise and respect has explicitly been reflected Georges Lefebvre&rsqu...
11 Pages(2750 words)Article

The Census Bur...
6 Pages(1500 words)Assignment
sponsored ads
Save Your Time for More Important Things
Let us write or edit the literature review on your topic "An Analysis of a Successful Fast Food Restaurants Business Strategy: AlBaik" with a personal 20% discount.
GRAB THE BEST PAPER

Let us find you another Literature review on topic An Analysis of a Successful Fast Food Restaurants Business Strategy: AlBaik for FREE!