Comments (0)
Add to wishlistDelete from wishlist
Cite this document
Summary
A business plan is a document that commercializes the business idea, as a whole, to potential investors and stakeholders (Schewtje 2010 p.1). A business plan is the starting point of any business venture…
Download full paperFile format: .doc, available for editing
HIDE THIS PAPERGRAB THE BEST PAPER93.4% of users find it useful 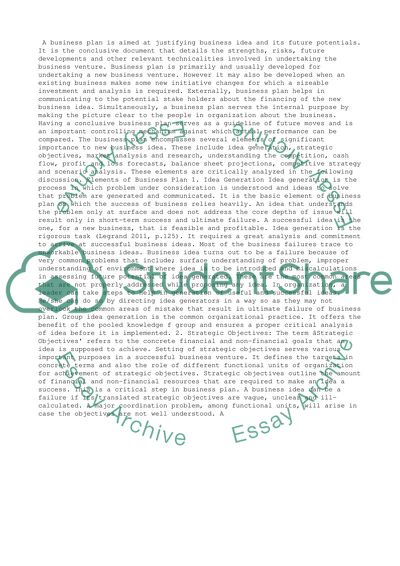 Download file to see previous pages A business plan is aimed at justifying business idea and its future potentials. It is the conclusive document that details the strengths, risks, future developments and other relevant technicalities involved in undertaking the business venture. Business plan is primarily and usually developed for undertaking a new business venture. However it may also be developed when an existing business makes some new initiative changes for which a sizeable investment and analysis is required. Externally, business plan helps in communicating to the potential stake holders about the financing of the new business idea. Simultaneously, a business plan serves the internal purpose by making the picture clear to the people in organization about the business. Having a conclusive business plan serves as a guideline of future moves and is an important controlling mechanism against which actual performance can be compared. The business plan encompasses several elements of significant importance to new business idea. These include idea generation, strategic objectives, market analysis and research, understanding the competition, cash flow, profit and loss forecasts, balance sheet projections, competitive strategy and scenario analysis. These elements are critically analyzed in the following discussion. Elements of Business Plan 1. Idea Generation Idea generation is the process in which problem under consideration is understood and ideas to solve that problem are generated and communicated. It is the basic element of business plan on which the success of business relies heavily. An idea that understands the problem only at surface and does not address the core depths of issue will result only in short-term success and ultimate failure. A successful idea is the one, for a new business, that is feasible and profitable. Idea generation is the rigorous task (Legrand 2011, p.125). It requires a great analysis and commitment to arrive at successful business ideas. Most of the business failures trace to unworkable business ideas. Business idea turns out to be a failure because of very common problems that include; surface understanding of problem, improper understanding of environment where idea is to be introduced and miscalculations in assessing future potential of idea generated. These are the most common areas that are not properly addressed while proposing any idea. In organization, a leader can take steps to help in generation of useful and successful ideas. He/she can do so by directing idea generators in a way so as they may not overlook the common areas of mistake that result in ultimate failure of business plan. Group idea generation is the common organizational practice. It offers the benefit of the pooled knowledge f group and ensures a proper critical analysis of idea before it is implemented. 2. Strategic Objectives: The term ‘Strategic Objectives’ refers to the concrete financial and non-financial goals that an idea is supposed to achieve. Setting of strategic objectives serves various important purposes in a successful business venture. It defines the targets in concrete terms and also the role of different functional units of organization for achievement of strategic objectives. Strategic objectives outline the amount of financial and non-financial resources that are required to make an idea a success. This is a critical step in business plan. A business idea can be a failure if its translated strategic objectives are vague, unclear and ill-calculated. A major coordination problem, among functional units, will arise in case the objectives are not well understood. A ...Download file to see next pagesRead More
Share:
Tags
Cite this document
(“Business plan- definition Essay Example | Topics and Well Written Essays - 2750 words”, n.d.)
Retrieved from https://studentshare.org/business/1393147-international-business-globalisation
(Business Plan- Definition Essay Example | Topics and Well Written Essays - 2750 Words)
https://studentshare.org/business/1393147-international-business-globalisation.
“Business Plan- Definition Essay Example | Topics and Well Written Essays - 2750 Words”, n.d. https://studentshare.org/business/1393147-international-business-globalisation.
Comments (0)
Click to create a comment or rate a document

On the other hand, these globalization standards are opposed by some critics and argue that globalization does not have to be a requirement for putting up a business in other countries, thus it is just a choice for entering a foreign market. Accordingly, standardization is applicable specifically to high-end markets and with accord to the market segmentation such as the trends that the young people patronize (Mullman, 2006) Regardless of the idea that globalization is mostly based on how the company standardizes the products, the home country still holds the profitability of the business as the economy affects how the foreign investors and other national sources back up the business (Stiglitz, 2006).
Making the world flat mak...
9 Pages(2250 words)Assignment
sponsored ads
Save Your Time for More Important Things
Let us write or edit the essay on your topic "Business plan- definition" with a personal 20% discount.
GRAB THE BEST PAPER

Let us find you another Essay on topic Business plan- definition for FREE!