Comments (1)
Add to wishlist Delete from wishlist
Cite this document
Summary
In this research study the researcher will make use of the quantitative techniques to get information that will be helpful in advising clients in Italy, France, and Spain on whether they should sell their property investment in any of those three countries or continue holding on to them. …
Download full paper File format: .doc, available for editing
HIDE THIS PAPERGRAB THE BEST PAPER92.1% of users find it useful 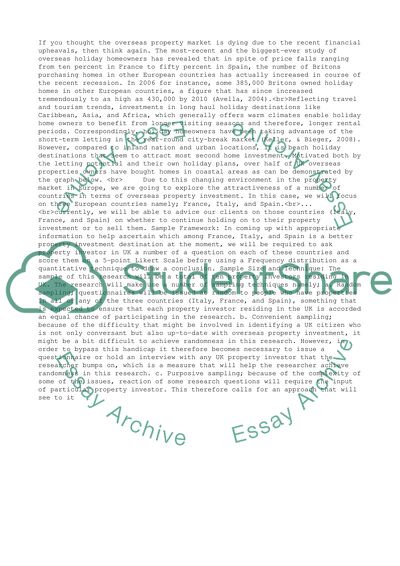 Download file to see previous pages If you thought the overseas property market is dying due to the recent financial upheavals, then think again. The most-recent and the biggest-ever study of overseas holiday homeowners has revealed that in spite of price falls ranging from ten percent in France to fifty percent in Spain, the number of Britons purchasing homes in other European countries has actually increased in course of the recent recession. In 2006 for instance, some 385,000 Britons owned holiday homes in other European countries, a figure that has since increased tremendously to as high as 430,000 by 2010 (Avella, 2004).
Reflecting travel and tourism trends, investments in long haul holiday destinations like Caribbean, Asia, and Africa, which generally offers warm climates enable holiday home owners to benefit from longer visiting seasons and therefore, longer rental periods. Correspondingly, holiday homeowners have been taking advantage of the short-term letting in the year-round city-break market (Keller, & Bieger, 2008). However, compared to inland nation and urban locations, it is beach holiday destinations that seem to attract most second home investment. Motivated both by the letting potential and their own holiday plans, over half of UK overseas properties owners have bought homes in coastal areas as can be demonstrated by the graph below.
Due to this changing environment in the property market in Europe, we are going to explore the attractiveness of a number of countries in terms of overseas property investment. In this case, we will focus on three European countries namely; France, Italy, and Spain.
...
currently, we will be able to advice our clients on those countries (Italy, France, and Spain) on whether to continue holding on to their property investment or to sell them. Sample Framework: In coming up with appropriate information to help ascertain which among France, Italy, and Spain is a better property investment destination at the moment, we will be required to ask property investor in UK a number of a question on each of these countries and score them on a 5-point Likert Scale before using a Frequency distribution as a quantitative technique to draw a conclusion. Sample Size and Technique: The sample of this research will be a total of ten property investors residing in UK. The research will make use a number of sampling techniques namely; a. Random sampling; questionnaires will be issued at random to people who have properties in all or any of the three countries (Italy, France, and Spain), something that is expected to ensure that each property investor residing in the UK is accorded an equal chance of participating in the research. b. Convenient sampling; because of the difficulty that might be involved in identifying a UK citizen who is not only conversant but also up-to-date with overseas property investment, it might be a bit difficult to achieve randomness in this research. However, in order to bypass this handicap it therefore becomes necessary to issue a questionnaire or hold an interview with any UK property investor that the researcher bumps on, which is a measure that will help the researcher achieve randomness in this research. c. Purposive sampling; because of the complexity of some of the issues, reaction of some research questions will require the input of particular property investor. This therefore calls for an approach that will see to it ...Download file to see next pages Read More
Share:
Tags
Cite this document
(“France increasingly eclipsing Spain as the favorite destination for UK Essay”, n.d.)
Retrieved de https://studentshare.org/business/1392352-business-decision-making

“France Increasingly Eclipsing Spain As the Favorite Destination for UK Essay”, n.d. https://studentshare.org/business/1392352-business-decision-making.
Comments (1)
Click to create a comment or rate a document

qc
qcollier added comment 2 years ago
Student rated this paper as
The topic of "France increasingly eclipsing Spain as the favorite destination for UK property buyers to invest" is quite popular among the assignments in university. Still, this document opens a new perspective of seeing the question. I’ll use the style for my own paper.

Some countries have pushed for an international consensus on issues of concern to all. France, which has suffered severely from the crisis, with an economic contraction and rising unemployment, has tried stand in opposition to the UK and the United States both of which believe minor financial regulations can alter and improve the situation—France would like to see more wide-ranging reforms accomplished through the increased unification of Europe. Efforts to deal with the crisis have led the French government to seek out more partners in Europe and try to push Europe wide reforms and a sort of European (as opposed to American) new capitalism. The government of Sarkozy has criticized British tax cuts and suggested the key to g...
8 Pages (2000 words) Coursework
sponsored ads
Save Your Time for More Important Things
Let us write or edit the essay on your topic "France increasingly eclipsing Spain as the favorite destination for UK property buyers to invest" with a personal 20% discount.
GRAB THE BEST PAPER

Let us find you another Essay on topic France increasingly eclipsing Spain as the favorite destination for UK property buyers to invest for FREE!