Comments (1)
Add to wishlistDelete from wishlist
Cite this document
Summary
Foreign Direct Investment (FDI) can be referred to the net inflows of investment to attain a long term management interest in a corporation operating in a foreign economy. The FDI mainly involves management participation and transfer of technology as well as expertise…
Download full paperFile format: .doc, available for editing
HIDE THIS PAPERGRAB THE BEST PAPER91.1% of users find it useful 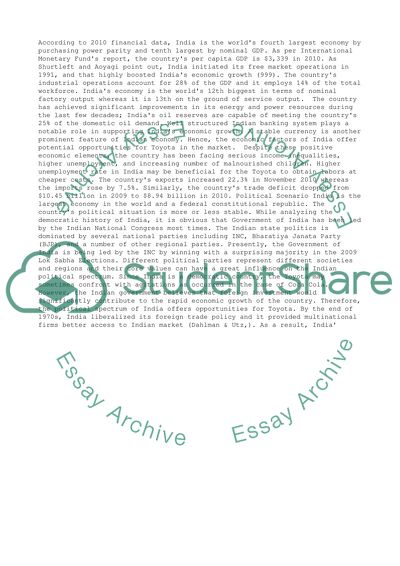 Download file to see previous pages According to 2010 financial data, India is the world’s fourth largest economy by purchasing power parity and tenth largest by nominal GDP. As per International Monetary Fund’s report, the country’s per capita GDP is $3,339 in 2010. As Shurtleft and Aoyagi point out, India initiated its free market operations in 1991, and that highly boosted India’s economic growth (999). The country’s industrial operations account for 28% of the GDP and it employs 14% of the total workforce. India’s economy is the world’s 12th biggest in terms of nominal factory output whereas it is 13th on the ground of service output. The country has achieved significant improvements in its energy and power resources during the last few decades; India’s oil reserves are capable of meeting the country’s 25% of the domestic oil demand. Well structured Indian banking system plays a notable role in supporting India’s economic growth. A stable currency is another prominent feature of Indian economy. Hence, the economic factors of India offer potential opportunities for Toyota in the market. Despite these positive economic elements, the country has been facing serious income inequalities, higher unemployment, and increasing number of malnourished children. Higher unemployment rate in India may be beneficial for the Toyota to obtain labors at cheaper costs. The country’s exports increased 22.3% in November 2010 whereas the imports rose by 7.5%. Similarly, the country’s trade deficit dropped from $10.45 billion in 2009 to $8.94 billion in 2010. Political Scenario India is the largest economy in the world and a federal constitutional republic. The country’s political situation is more or less stable. While analyzing the democratic history of India, it is obvious that Government of India has been led by the Indian National Congress most times. The Indian state politics is dominated by several national parties including INC, Bharatiya Janata Party (BJP), and a number of other regional parties. Presently, the Government of India is being led by the INC by winning with a surprising majority in the 2009 Lok Sabha Elections. Different political parties represent different societies and regions and their core values can have a great influence on the Indian political spectrum. Since India is a democratic country, the Toyota may sometimes confront with agitations as occurred in the case of Coca Cola. However, the Indian government believes that foreign investment would significantly contribute to the rapid economic growth of the country. Therefore, the political spectrum of India offers opportunities for Toyota. By the end of 1970s, India liberalized its foreign trade policy and it provided multinational firms better access to Indian market (Dahlman & Utz,). As a result, India’ ...Download file to see next pagesRead More
Share:
Tags
Cite this document
(“Report on Foreign Direct Investment of The Toyota Motor Corporation Term Paper”, n.d.)
Retrieved de https://studentshare.org/business/1391093-international-business
(Report on Foreign Direct Investment of The Toyota Motor Corporation Term Paper)
https://studentshare.org/business/1391093-international-business.
“Report on Foreign Direct Investment of The Toyota Motor Corporation Term Paper”, n.d. https://studentshare.org/business/1391093-international-business.
Comments (1)
Click to create a comment or rate a document

oc
octavia61 added comment 1 year ago
Student rated this paper as
This essay saved me today. I liked the content. It was very useful for my business course.

A Plan for Sustainability through Discussing Status and Providing Mitigation Measures

Fashion Photography As A Career

...Investment Appraisal and Management Control Introduction: Businesses have to make large investments every year. Investments are generally made on buildings, office equipments, transport, etc. It is very essential that management make informed decisions on every investment made since these decisions are not easily reversible, and involve large sums of money, are very futuristic, and have long-term consequences (Bott, 2008). All decisions made by the management affect the company’s revenue in one way or another. Hence, it is important that managers are aware of the consequences of every decision they take, be it, buying a computer for a small company or a vehicle for delivery of goods, or manufacturing plant for the company or a company...
14 Pages(3500 words)Report

...” years ago (Cohen 2006, p. 69). The silly product that originally had no practical use illustrates the three factors needed for innovation to push through and these are shared goals (common vision), tolerance for risk-taking, failure, strange and bizarre and lastly, to reward successful innovations. The global culture at General Electric long embedded being a multinational company makes it easier to implement corporate strategy worldwide. It is this ease and speed that is one of its core strengths as a business giant. Despite its size, G.E. has not lost its entrepreneurial spirit. The spirit of competition is alive and well at General Electric but what it needs are clear directions of where it is going today. That can come only...
12 Pages(3000 words)Report
sponsored ads
Save Your Time for More Important Things
Let us write or edit the term paper on your topic "Report on Foreign Direct Investment of The Toyota Motor Corporation" with a personal 20% discount.
GRAB THE BEST PAPER

Let us find you another Term Paper on topic Report on Foreign Direct Investment of The Toyota Motor Corporation for FREE!