Comments (1)
Add to wishlistDelete from wishlist
Cite this document
Summary
However, one of the species will grow at a rapid rate as compared to the other. The experiment aimed to observe intraspecific competition between different species. The two specied depended on bacteria on…
Download full paperFile format: .doc, available for editing
HIDE THIS PAPERGRAB THE BEST PAPER93% of users find it useful 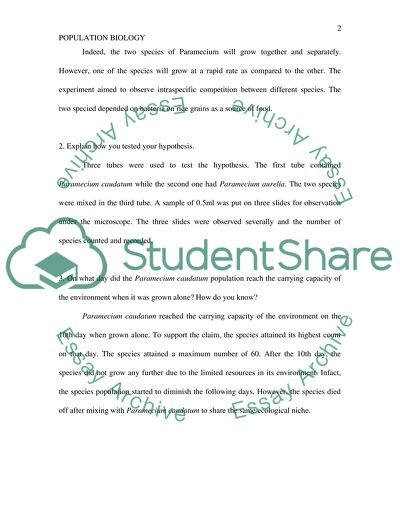 Population Biology Table I: Day P. caudatum alone, cells/mL P. aurelia alone, cells/mL P. caudatum mixed, cells/mL
P. aurelia mixed, cells/mL
0
2
2
2
2
2
8
8
12
8
4
26
50
20
32
6
52
86
20
66
8
56
98
18
82
10
60
98
10
92
12
58
98
6
96
14
58
98
0
96
16
56
98
0
96
Journal Questions:
1. Make a hypothesis about how you think the two species of Paramecium will grow alone and how they will grow when they are grown together.
Indeed, the two species of Paramecium will grow together and separately. However, one of the species will grow at a rapid rate as compared to the other. The experiment aimed to observe intraspecific competition between different species. The two specied depended on bacteria on rice grains as a source of food.
2. Explain how you tested your hypothesis.
Three tubes were used to test the hypothesis. The first tube contained Paramecium caudatum while the second one had Paramecium aurelia. The two species were mixed in the third tube. A sample of 0.5ml was put on three slides for observation under the microscope. The three slides were observed severally and the number of species counted and recorded.
3. On what day did the Paramecium caudatum population reach the carrying capacity of the environment when it was grown alone? How do you know?
Paramecium caudatum reached the carrying capacity of the environment on the 10th day when grown alone. To support the claim, the species attained its highest count on that day. The species attained a maximum number of 60. After the 10th day, the species did not grow any further due to the limited resources in its environment. Infact, the species population started to diminish the following days. However, the species died off after mixing with Paramecium caudatum to share the same ecological niche.
4. On what day did the Paramecium aurelia population reach the carrying capacity of the environment? How do you know?
On the other hand, Paramecium aurelia reached its population capacity of the enviroment on the 8th day. On the 8th day, the species attained a maximum number of 98 organisms. When grown alone, the species recorded its highest count on this specific day. It maintained the same number count for the next days. On the other hand, it had a slightly lesser count when mixed with Paramecium caudatum. In this case, it had a muximum number on the 12th day.
5. Explain the differences in the population growth patterns of the two Paramecium species. What does this tell you about how Paramecium aurelia uses avalable ressources?
The differences in population growth patterns between the two species results from the way each individual species utilizes its available resources. In this case, Paramecium caudatum utilizes more resources hence resulting to a lower population count. However, Paramecium aurelia has a high population count because each individual organism utilizes lesser available resources when gown alone.
6. Describe what happened when the Paramecium populations were mixed in the same test tube. Do the results support the principle of competitive exclusion?
According to the principle of competitive exclusion, thwo or more species competing for the same available resources cannot co-exist in the same environment keeping other factors constant. When mixed in the same test tube, Paramecium aurelia survived while Paramecium caudatum died off. In this scenaio, Paramecium aurelia had the advantage of survival and high population growth rate.
7. Explain how this experiment demonstrates that no two species can occupy the same niche.
As demonstrated in this experiment, no two species can occupy the same ecological niche keeping other factors constant. As a result, one species will have an avantage and dominate over the other one. The superior speciea will have much of the available resources and dominate the ecological niche. Hence, the less advantaged species will die off.
Post-laboratory Questions:
1. Paramecia possess:
a. A nucleus
b. Flagella
c. A contractile vacuole
d. A and C
e. All of the above
2. The organisms used in this experiment belong to which domain of life?
a. Bacteria
b. Archaea
c. Eukarya
3. What served as the food for the paramecia in this experiment?
a. Rice
b. Oats
c. Bacteria
d. Nothing, they are photosynthetic
4. Which of the following can influence the carrying capacity of a population?
a. Availability of food
b. Availability of water
c. Competition
d. Build up of toxins
e. All of the above
5. Which type of competition would be observed between organisms within the P. caudatum culture?
a. Interspecific
b. Intraspecific
c. There would be no competition, they are of the same species
6. Which culture reached its carrying capacity the fastest in this experiment?
a. P. caudatum, alone
b. P. aurelia, alone
c. P. aurelia, mixed
7. You have counted 30 organisms in your culture on Day 4. The concentration of organisms in this culture is:
a. 15 cells/mL
b. 30 cells/mL
c. 60 cells/mL
d. 90 cells/mL
8. Based upon your data, which culture experienced the greatest rate of exponential growth?
a. P. caudatum, alone
b. P. aurelia, alone
c. P. caudatum, mixed
d. P. aurelia, alone
9. Based upon the data, which organism appeared more efficient at using its resources?
a. P. caudatum
b. P. aurelia
10. In a repeat of this experiment, you found that on Days 10-16 the number of individuals in the P. caudatum, mixed culture began to gradually rise. A possible explanation for this is:
a. There was insufficient food in the culture
b. The temperature warmed enough to allow for more growth
c. A genetic variant of the original population began to experience growth due to its use of a different food (bacterium) source
d. None of the above could lead to this scenario Read More
Share:
Tags
Cite this document
(“Virtual lab #3 Assignment Example | Topics and Well Written Essays - 250 words”, n.d.)
Virtual lab #3 Assignment Example | Topics and Well Written Essays - 250 words. Retrieved from https://studentshare.org/biology/1699179-virtual-lab-3

sh
shanahanlafayet added comment 1 day ago
Student rated this paper as
At first, I thought 1 of pages is too much for such a topic. But now I see it could not be done better. As the author starts you see the complexity of the issue. I’ve read all at once. Great document

CHECK THESE SAMPLES OF Virtual lab #3

...?Bulk and nanoparticle forms of tea catechins and polyphenols exhibit opposite effects on DNA damaged lymphocytes of colorectal cancer patients Abstract Tea catechin epigallocatechin-3-gallate (EGCG), and other polyphenols such as theaflavins (TF) are increasingly proving useful as chemopreventives in a number of human cancers, but without affecting the normal cells. The polyphenols in tea are known to have antioxidant properties which can quench free radical species, and also pro-oxidant activities that appear to be responsible for the induction of apoptosis in tumor cells. The bioavailability of these natural compounds is an important factor that determines their efficacy. Studies have shown a generally low...
12 Pages(3000 words)Lab Report

...Running Head: Temperature and Equilibrium Virtual Lab PHYSICS University: Course: Tutor: Date: 1. According to NOAA, the hurricane season begins June 1st to 30th November. It is also forecasted that there shall be severe thunderstorms in the coming weeks. 2. Imbalances in nature cannot be prevented but people can prepare for them. According to CDC, when under a hurricane watch, the following can be done in preparation: People should learn about emergency plans, warning signals evacuation routes and locations of emergency shelters. People should identify potential hazards and know how to secure or protect them before the hurricane strikes. Homes should acquire fire extinguishers. Having post...
1 Pages(250 words)Essay

...compartments on the two sides of the cell: inside and outside. There are specific functions for proteins embedded in the interior of the phospholipid bilayer. They carry out various functions such as selective transport of molecules and cell to cell identification. Thus, the main function of the plasma membrane is to control the active and passive movement of various substances into and out of the cell. 3. Describe the differences between animal and plant cells.  The main difference between animal and plant cells is the presence of a cell wall in plant cells which has a rigid, rectangular-shaped structure.  A cell wall is composed of cellulose, hemicellulose, lignin, enzymes and structural proteins. Animal cells do not...
5 Pages(1250 words)Essay

...Week 3 lab cis175 Topologies There are several types of topologies which could be applied in such a case. Example of that includes LAN and point to point network. Therefore in this case the best is the LAN. It means Local Area Network (Spurgeon, 2009). The reason for this is that any node in the LAN contains more than one physical link to all other devices in the Network (Hekmat, 2006). a. When such links are mapped graphically they form into a geometrical shape. That shape can be used to describe the topography of the network. For this reason, mapping the flow of the data within the network components would determine the topology of the network logically (Spurgeon, 2009). 2. The best would be peer to peer network. The reasons... 3 lab...
1 Pages(250 words)Assignment

...Introduction The degree of tombstone weathering is figured to rely on various factors given that the some tombstone stayslonger than others do. One of the major the factor that can be measured effectively is the age of the gravestone. Through calibrated relative dating, that involves dating them relative to each other, the age of the tombstones can be arrived at. Other factors that affect weathering degree of a tombstone include type of rock, height, length and thickness. Through exploring these factors, the knowledge about the degree of weathering on tombstones is established. Further, a model for predicting age can be succinctly tested based on weathering degree. As the result of the above concepts, this lab was...
2 Pages(500 words)Lab Report

...and external router configs. The hostname and fa00 interface must be set up on both internal and external routers. The configuration process allows a number of activities on the router such as denying access to a specific IP address, adding a password or securing virtual terminal lines. For instance, we can deny access to 12.12.12.15 to prevent it from accessing internal network, the configuration is as follows (Anonymous, 2012): conf t: access list 1-100 deny/permit 12.12.12.15. The number “12.12.12.15” represents the IP address to be blocked in the internal network. In the internal router configuration interface, the following line of code is inputted: Internal (Config) #access-list 1 deny 12.12.12.15. Internal...
1 Pages(250 words)Assignment

Let us find you another Assignment on topic Virtual lab #3 for FREE!