Comments (0)
Add to wishlistDelete from wishlist
Cite this document
Summary
The paper "Cherokee Tribe, Southeast Native Americans" states that 'Cherokee' is Creek for 'people with another language'. The best-known episode in Cherokee history was the worst: the Trail of Tears, the forced relocation of the Cherokee Indians from their ancestral home in the southeast to Oklahoma…
Download full paperFile format: .doc, available for editing
HIDE THIS PAPERGRAB THE BEST PAPER95.1% of users find it useful 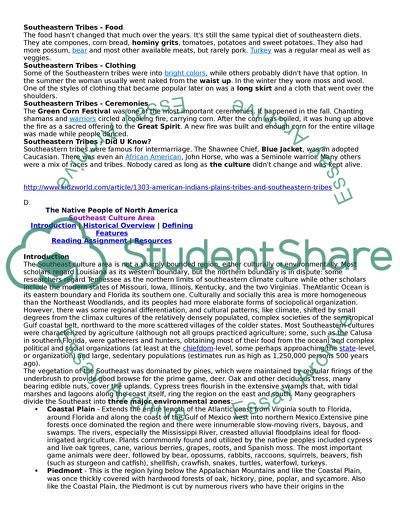 Download file to see previous pages Woodland Indians were knowledgeable about herbs and natural medicines. Knowledge was handed down orally from one generation to the next.
Each tribe was divided into a small number of clans. Clans were related to people. When a baby was born, he or she belonged to the mothers' clan. Laws vary, but some laws were the same in all tribes. One such law was that you could not marry someone from your own clan.
The Southeast Woodland people believed in honor. They believed in many gods and goddesses, deities to whom they prayed in song and dance for help and guidance. They had some very strange customs and some very beautiful ones. Come meet a few of the Southeast Woodland Indian tribes and see how they lived in olden times.
Southeast - The largest Native American tribe, the Cherokee, lived in the Southeast. Other tribes included the Seminole in Florida and the Chickasaw. These tribes tended to stay in one place and were skilled farmers.
The Plains Indians lived in the huge area between the Mississippi and the Rocky Mountains. There were a few trees but lots of wildlife. One of the most important animals to the Plains Indians was the buffalo. These tribes were well known for their religious ceremonies, hunting skills and warpath customs. A few of the Plains tribes include the Sioux, Cheyenne, Comanche and Blackfoot.
Since the Plains Indians followed the buffalo around, they needed shelter they could move quickly. They lived in teepees. A teepee was made from leaning poles together and covering them with buffalo hide. The few tribes that didn't move around lived in dome-shaped grass lodges covered in mud.
The Plains tribes were hunters and gathers. Not everyone grew the same food so they often traded amongst tribes. There was plenty of buffalo meat to eat. They roasted it, made sausages from it and dried it out. They also grew pumpkins and other vegetables. Antelope was another common meal.
Men usually wore animal skin leggings, a loincloth (a small piece of cloth or skin worn between the legs) and a belt (to hold the loincloth). When it was cold, they wore buffalo skin on their shoulders. Women and girls wore dresses made of deerskin. ...Download file to see next pagesRead More
Share:
Cite this document
(Cherokee Tribe, Southeast Native Americans Coursework, n.d.)
Cherokee Tribe, Southeast Native Americans Coursework. Retrieved from https://studentshare.org/anthropology/1798340-7-southeast-precontact-life-ways-changes-during-contact-and-colonialism
(Cherokee Tribe, Southeast Native Americans Coursework)
Cherokee Tribe, Southeast Native Americans Coursework. https://studentshare.org/anthropology/1798340-7-southeast-precontact-life-ways-changes-during-contact-and-colonialism.
“Cherokee Tribe, Southeast Native Americans Coursework”. https://studentshare.org/anthropology/1798340-7-southeast-precontact-life-ways-changes-during-contact-and-colonialism.
Comments (0)
Click to create a comment or rate a document
sponsored ads
Save Your Time for More Important Things
Let us write or edit the coursework on your topic "Cherokee Tribe, Southeast Native Americans" with a personal 20% discount.
GRAB THE BEST PAPER

Let us find you another Coursework on topic Cherokee Tribe, Southeast Native Americans for FREE!