Comments (0)
Add to wishlistDelete from wishlist
Cite this document
Summary
In contemporary Guyana, there are two partisan political parties that exist and persist: the Peoples Progressive Party (PPP) and the Peoples National Congress (PNC). Historically, these two parties were one; both of their leaders were co-founders of the PPP prior to the split…
Download full paperFile format: .doc, available for editing
HIDE THIS PAPERGRAB THE BEST PAPER96.5% of users find it useful 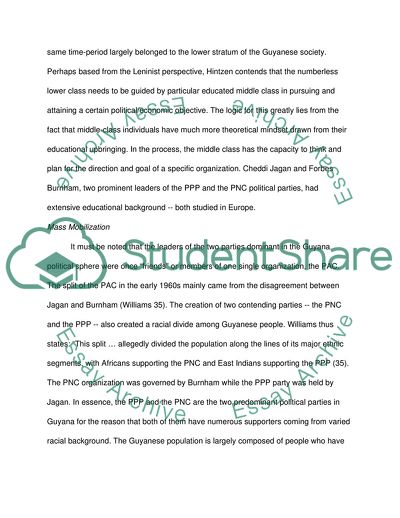 Download file to see previous pages In the long process, the division of the original PPP had generated a racial divide: between Afro- and Indo-Guyanese tribes. This paper discusses the logic of the existence and continuance of the PNC and the PPP in the modern-day Guyanese society. Further, it argues that the two parties are racially entrenched.
One of the reasons why the PPP and the PNC are the only two main political parties in Guyana is because both significantly constitute a middle-class membership/leadership. Hintzen observes that there was disunity among Guyanese workers in the 1940s, prior to the establishment of the Political Affairs Committee (PAC). The rationale for this disunity and lack of direction is widely attributed to the absence of middle-class leadership, among other things (Hintzen 33). Workers in the same time-period largely belonged to the lower stratum of the Guyanese society. Perhaps based from the Leninist perspective, Hintzen contends that the numberless lower class needs to be guided by particular educated middle class in pursuing and attaining a certain political/economic objective. The logic for this greatly lies from the fact that middle-class individuals have much more theoretical mindset drawn from their educational upbringing. In the process, the middle class has the capacity to think and plan for the direction and goal of a specific organization. Cheddi Jagan and Forbes Burnham, two prominent leaders of the PPP and the PNC political parties, had extensive educational background -- both studied in Europe.
It must be noted that the leaders of the two parties dominant in the Guyana political sphere were once “friends” or members of one single organization, the PAC. The split of the PAC in the early 1960s mainly came from the disagreement between Jagan and Burnham (Williams 35). The creation of two contending parties -- the PNC and the PPP -- also created a racial divide among ...Download file to see next pagesRead More
Share:
Cite this document
(Why is the People Progressive Party still standing today Why were the Research Paper - 1, n.d.)
Why is the People Progressive Party still standing today Why were the Research Paper - 1. Retrieved from https://studentshare.org/anthropology/1754029-why-is-the-people-progressive-party-still-standing-today-why-were-the-pppc-and-pnc-the-two-main-political-parties-was-these-two-parties-because-of-racial-differences

Let us find you another Research Paper on topic Why is the People Progressive Party still standing today Why were the PPP/C and PNC the two main Political parties Was these two parties because of racial differences for FREE!