Comments (0)
Add to wishlistDelete from wishlist
Cite this document
Summary
This paper "Cultural Anthropology on Aborigines of Australia" focuses on the fact that civilization is marked by its traditions, beliefs, concepts, history, grandeur, and customs that it possesses. It is not a representation of the invasions it went through famous heroic talents or through power. …
Download full paperFile format: .doc, available for editing
HIDE THIS PAPERGRAB THE BEST PAPER96.4% of users find it useful 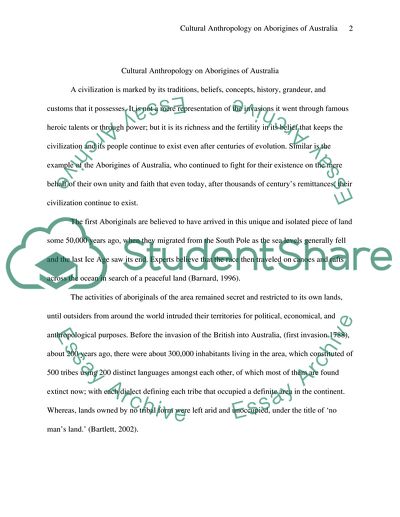 Extract of sample "Cultural Anthropology on Aborigines of Australia"

Download file to see previous pages The first Aboriginals are believed to have arrived in this unique and isolated piece of land some 50,000 years ago when they migrated from the South Pole as the sea levels generally fell and the last Ice Age saw its end. Experts believe that the race then travelled on canoes and rafts across the ocean in search of a peaceful land (Barnard, 1996).

The activities of aboriginals of the area remained secret and restricted to its own lands until outsiders from around the world intruded their territories for political, economic, and anthropological purposes. Before the invasion of the British into Australia, (first invasion 1788), about 200 years ago, there were about 300,000 inhabitants living in the area, which constituted of 500 tribes using 200 distinct languages amongst each other, of which most of them are found extinct now; with each dialect defining each tribe that occupied a definite area in the continent. Whereas, lands owned by no tribal form were left arid and unoccupied, under the title of ‘no man’s land.’ (Bartlett, 2002).

Though the Aboriginals vary abundantly from their appearance due to the diversity seen between their groups; however, some of the common features that all of them share are their dark brown skin with wavy hair, developed onto slender bodies which are erect showing their hardworking capabilities. Anthropologists believe that variations in their appearances are due to their migrations at different points of time in history. Whereas some critics to this opinion believe in ‘homogeneity’ of the aboriginals, whereas any variations in them might be due to variation in diet and the environment they lived in, while as a whole, they lived in isolation from rest of the world (Ashley, 2009).

CHECK THESE SAMPLES OF Cultural Anthropology on Aborigines of Australia

The first culture clash between the Aboriginals and the Europeans was over clothing4. The Europeans were used to covering themselves up completely5. As a result, the Europeans were shocked to see naked Aboriginals roaming around freely6. The Abori...
6 Pages(1500 words)Article
sponsored ads
Save Your Time for More Important Things
Let us write or edit the case study on your topic "Cultural Anthropology on Aborigines of Australia" with a personal 20% discount.
GRAB THE BEST PAPER

Let us find you another Case Study on topic Cultural Anthropology on Aborigines of Australia for FREE!