Comments (0)
Add to wishlistDelete from wishlist
Cite this document
Summary
Porter developed the Five Forces Model as a strategic tool to be used to analyze the competitiveness as well as lucrativeness of the market (Strydom, 156). The five forces in this case include the following: rivalry among existing players, threat of substitutes, buyer power,…
Download full paperFile format: .doc, available for editing
HIDE THIS PAPERGRAB THE BEST PAPER94.1% of users find it useful 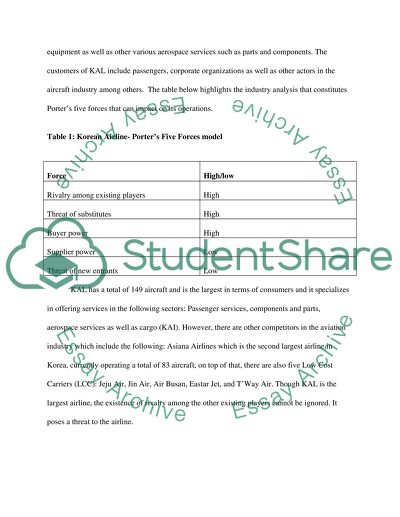 Porter developed the Five Forces Model as a strategic tool to be used to analyze the competitiveness as well as lucrativeness of the market (Strydom,156). The five forces in this case include the following: rivalry among existing players, threat of substitutes, buyer power, supplier power and threat of new entrants into the market. The image below shows Porter’s Five Forces Model.

As such, this paper seeks to discuss Porter’s five forces with reference to Korean Airways. The strength of each force will be analysed in detail below the table.
According to Korea Aerospace Industries Association (KAI), Korean Airlines (KAL) is the largest airline in Korea and it operates in passenger as well commercial/cargo aircraft equipment as well as other various aerospace services such as parts and components. The customers of KAL include passengers, corporate organizations as well as other actors in the aircraft industry among others. The table below highlights the industry analysis that constitutes Porter’s five forces that can impact on its operations.
Table 1: Korean Airline- Porter’s Five Forces model
Force
High/low
Rivalry among existing players
High
Threat of substitutes
High
Buyer power
High
Supplier power
Low
Threat of new entrants
Low
KAL has a total of 149 aircraft and is the largest in terms of consumers and it specializes in offering services in the following sectors: Passenger services, components and parts, aerospace services as well as cargo (KAI). However, there are other competitors in the aviation industry which include the following: Asiana Airlines which is the second largest airline in Korea, currently operating a total of 83 aircraft, on top of that, there are also five Low Cost Carriers (LCC): Jeju Air, Jin Air, Air Busan, Eastar Jet, and T’Way Air. Though KAL is the largest airline, the existence of rivalry among the other existing players cannot be ignored. It poses a threat to the airline.
As noted above, there are six other competitors in the aircraft industry which entails that the threat of substitutes is high. For instance, “In 2013, 4.9 million international travelers, or 9.6% of all international travelers, used LCCs,” (KAI). The number of passengers using LCCs has dramatically increased which means that they can switch from KAL to these low cost planes. On the other hand, the consumers have the power to determine prices since they can easily switch to low cost careers and this in turn can force Korean Airlines to review its prices downwards.
According to KAI, the bargaining power of suppliers is low as a result of the fact that “all U.S. aerospace exports are duty-free as of March 15, 2012, and as a result of the implementation of the Korea-U.S. FTA (KORUS).” This means that this trade agreement between the two countries is specifically meant to protect the interests of both nations. Prices are regulated at acceptable levels and the suppliers of aircraft as well as aircraft components may not impose high prices without consulting their partners in business. Lastly, the threat of new entrants is low given that the aircraft industry is capital intensive. Only established companies can manage to sustain their operations but it can be an uphill task for new entrants to penetrate the market.
Works cited
ACI Asia-Pacific/World Annual General Assembly, Conference & Exhibition 2014 May 26 – 28, 2014, Seoul. . 2015. Web. 24 February 2015.
ITA Code. Leading Sectors for U.S. Export and Investment . 15 September 2014. Web. 24 February 2015.
Korea Aerospace Industries Association (KAIA) . 2015. Web. 24 February 2015.
Porter Michael. Competitive strategy. 1980. Print.
Strydom Joanah. Marketing. JUTA: CT, 2004. Print. Read More
Share:
Tags
Cite this document
(“Korean Airline Porter's 5 Forces Coursework Example | Topics and Well Written Essays - 500 words”, n.d.)
Retrieved de https://studentshare.org/tourism/1679910-korean-airline-porters-5-forces

...? Consumer technology industry Michael Porter’s 6 Forces Michael Porter arguers that there are six forces that determines a company’s competitiveness and that these forces may change over time as the company’s conditions change (Ha?ma?la?inen, 2004). These forces are entry threats, rivalry from existing competitors, threat of substitution, bargaining power of suppliers and the bargaining power of buyers and complementary factors. Entrants’ threat New entrants invade the existing market and bring competition and changes in the market environment (Ha?ma?la?inen, 2004). Entries divide the market amongst more sellers and decrease each company’s share. The technology industry attracts vast newcomers due to its appealing customer base and fast...
4 Pages(1000 words)Research Paper

...Background The Five Forces by Michael Porter provides a realistic evaluation of prospective stages of profits, opportunity and risk of a company inan industry (Abell, 1999). The model of Porter is according to the framework of corporate strategy and the threats in the company's external environment. The model gives emphasis on the competitive strategy that an organization implements in accordance to their understanding of the structures in the industry and the changes they undergo (Bakos, 1998). Porter's has initiated the five forces that formed each industry and each market. This model distinguished the strength of rivalry and hence the revenues and attractiveness of an industry. Five Forces Model can be utilized as an instrument...
10 Pages(2500 words)Essay

... Amazon.com has faired well in a fiercely competitive environment. Porter’s Five Forces model can be used to analyse this environment. The threat of substitutes is a serious factor that Amazon.com has to contend with. However, Amazon.com has not allowed its business to be daunted by it. The company has managed to stay above its competitors by offering them the ability to look inside some of the books they may want to purchase. Additionally, no shipping is charged on orders above a certain value once the sale is within a certain geographic area. Although it also has an e-reader, it has a disadvantage in that Barnes and Nobel is able to provide in-store support for its E-reader – the Nook. Barriers to entry in the industries...
4 Pages(1000 words)Essay

...Topic: 5 Porter Forces Affiliation: The five porter forces provide a large industrial analysis and a framework through which business strategic development is formed and evaluated. The forces ensure and maintain a balance of power within a business context as well as provide measures for competition among corporations, markets and industries. The building porter forces under Michels Patisserie, a large cake business influence the potential gains in the company and they include: Rivalry Rivals in a business context can exploit markets and even destroy it depending on the capacity to compete well. A company offering goods at cheaper prices tends to attract more potential clients than one whose prices are exorbitant (O’Shaughnessy, 2006, p.12...
2 Pages(500 words)Essay

...﻿The Five Porter Forces The Porter five forces provide an analysis on which a company should base the production techniques and shows a balance of forces that determine the profitability of an industry. For a firm to ensure maximum profits there is need to use the model to understand the industry context so as to develop an edge over the immediate rivals. The underlying five forces that were given by Porter include the supplier power, buyer power, threat of substitutes, rivalry and entry barriers or threats of new entrants to a market (Greenwald & Kahn 57). Michael Porter has provided that firms can sustain different levels of returns which are dependent on the industry structure but which can also be enhanced by the use and basic...
2 Pages(500 words)Essay

...Porter’s Five Forces al Affiliation Porter’s Five Forces Several companies have several strategies in ensuring that they remain financially relevant in the dynamic business world. It is a fact that in business, there are several challenges that may hinder the success of any business venture. These may range from the strength of the competitors, quality of the products as well as the nature of relationship maintained by the customers (Porter, 2011). However, business ventures always operate with the main motive of making profits. Therefore, profit maximization is always the key issue that drives all the business industries. However, several forces shape the competition within the business industry. Porter identifies five distinct forces...
1 Pages(250 words)Essay

...Porter’s Five Forces Affiliation Porter’s Five Forces: The Robotic Industry Porter’s five forces is a model that is widely used in the current business world globally. Porter’s work has resulted to big changes to the study of competitive strategy for regions, nations and corporations. Porter claims that dealing with competition is the major task of the strategist. Most managers tend to think of competition narrowly. The five forces that porter came up with are the existing competitors, the power of buyers, the power of suppliers, threat of entry and threat of substitutes. The configurations of the five forces tend to differ regarding the industries, but the underlying drivers of profitability are the same. The robotics industry...
2 Pages(500 words)Essay

...Running Head: PORTER’S FIVE FORCES ON AMAZON PORTER’S FIVE FORCES ON AMAZON By State Date Porter’s Five Forces on Amazon Consumer Power Many Amazon buyers purchase popular products such as books simply because they either do not have the time to visit stores physically or find the conventional purchasing practice tedious. Second, Amazon buyers are inclined to become loyal because of Amazon’s low price offers that arise from low overhead costs (Cukier, Hodson, and Ryan, 2009, p. 4). These two factors raise the bargaining power of Amazon buyers. When Amazon fails to offer the lowest possible offers, the customer will simply search the internet for the next best price. Supplier Power Amazon enjoys a great deal of benefits...
2 Pages(500 words)Essay
sponsored ads
Save Your Time for More Important Things
Let us write or edit the coursework on your topic "Korean Airline Porter's 5 Forces" with a personal 20% discount.
GRAB THE BEST PAPER

Let us find you another Coursework on topic Korean Airline Porter's 5 Forces for FREE!