Comments (0)
Add to wishlistDelete from wishlist
Cite this document
Summary
Technology has finally caught up and is now affording more people the opportunity to go into space for as low as $24,000. This is millions away from the $35 million the first space tourist paid. It is not the same…
Download full paperFile format: .doc, available for editing
HIDE THIS PAPERGRAB THE BEST PAPER98% of users find it useful 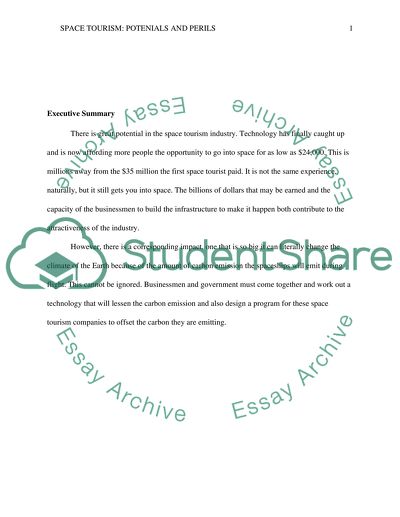 Download file to see previous pages This cannot be ignored. Businessmen and government must come together and work out a technology that will lessen the carbon emission and also design a program for these space tourism companies to offset the carbon they are emitting.
There is an unspoken mantra in technological space: build it and they will come (Taylor, 2006). For years, technological companies spend billions of dollars on research and development of new products and services with no clear market. It’s a risky move but one that almost always pays off.
That, in essence, is the business principle followed by space tourism. Vienna has expressed plans on building a spaceport in Asia, Singapore and United Arab Emirate. It will tap Russia in building five space crafts to shoot man into space. Building it will cost anywhere between $115 million to $265 million to build (Malik 2008).
The numbers, obviously, are big risks and the obvious concern is whether it is worth pursuing. This paper will examine space tourism from three angles: economic, environmental and cultural. Specifically, this paper will answer the following questions:
A qualitative method will be used to collect information about the topic. Published articles, news articles, and published statements will be the main references to analyse the economic, environmental, cultural and educational potential and impact of space tourism.
Figures on the target market and potential revenue will be gathered and analysed. The same procedure will be applied to environmental impact. Several studies have already been done that quantifies who space tourism’s economic potential will impact the environment. These numbers will be collected and interpreted.
The first space tourist went to space in April 2001. Dennis Tito paid $35 million for the experience of seeing Earth from the space. Since then, only seven people ...Download file to see next pagesRead More
Share:
Tags
Cite this document
(“Space Tourism Term Paper Example | Topics and Well Written Essays - 1250 words”, n.d.)
Space Tourism Term Paper Example | Topics and Well Written Essays - 1250 words. Retrieved from https://studentshare.org/tourism/1585006-space-tourism

CHECK THESE SAMPLES OF Space Tourism

... an average which actually, the group process has refined. Works even better with groups larger than 5 since averages are more accurate. Write your own paper on any 2 chosen methods of Risk Analysis above, relating these methods to your final Project topic you will be working. This paper will graded on your understanding of how these methods can be applied, not just a description of the Risk Analysis processes. Important to learn these! OUR FINAL PROJECT TOPIC: Our study group has selected space tourism for our assignment. In the most basic sense, space tourism involves launching civilians to space for recreational purposes. Steve Tito is the first private civilian who launched to Space in 2001 (Dennis Tito, n.d.). This flight, as well...
3 Pages(750 words)Essay

... This paper entitled Risk Management Analysis: Space Tourism is about the identification of risks involved–and its ways to resolve and reduce them–in getting Space Tourism in full swing. It emphasizes the risk identification; so that the concerned people can consequently apply them to reduce imminent risks in space tourism, to save lives. This paper–albeit its delicate stand towards space tourism–stresses the positive aspect of space tourism as an opportunity to bring Science and luxury travel to new heights. It looks at space tourism not a profiteering racket by industry giants but as an evolving idea of space travel capable of giving a completely safe travel option for the next destination in the outer space. This paper has emphasized...
5 Pages(1250 words)Essay

... Comparisons between Tourism Websites Introduction Tourism websites are e-commerce web portals that are aimed at making the tourism sites, hotels and restaurants sell highly in comparison with other competitors, ensure trust to the online visitors, and always are for efficient and effective communication between business and business and business and customers. 1.1. Informative The biggest issues leading to customers’ disputes regarding the e-commerce services include any discrepancies between the advertised qualities of the tourisms’ merchandise or services and the perceptions customers get upon receiving such offered services and goods, possible and easy reach to the tourism industries’ customer care support by the customers...
6 Pages(1500 words)Term Paper
sponsored ads
Save Your Time for More Important Things
Let us write or edit the term paper on your topic "Space Tourism" with a personal 20% discount.
GRAB THE BEST PAPER

Let us find you another Term Paper on topic Space Tourism for FREE!