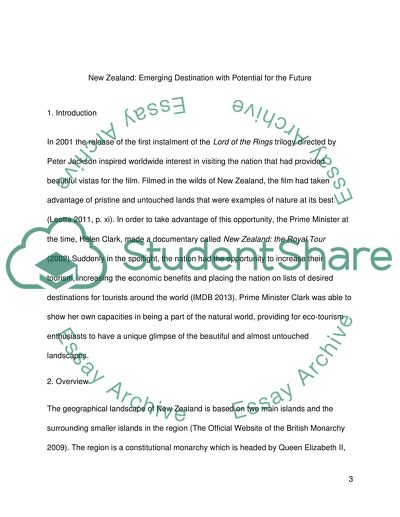 Download file to see previous pages xi). In order to take advantage of this opportunity, the Prime Minister at the time, Helen Clark, made a documentary called New Zealand: the Royal Tour (2002).Suddenly in the spotlight, the nation had the opportunity to increase their tourism, increasing the economic benefits and placing the nation on lists of desired destinations for tourists around the world (IMDB 2013). Prime Minister Clark was able to show her own capacities in being a part of the natural world, providing for eco-tourism enthusiasts to have a unique glimpse of the beautiful and almost untouched landscapes. 2. Overview The geographical landscape of New Zealand is based on two main islands and the surrounding smaller islands in the region (The Official Website of the British Monarchy 2009). The region is a constitutional monarchy which is headed by Queen Elizabeth II, but managed by a Prime Minister who is advised as needed by the appointed Governor General who represents the Queen, but asserts authority rarely, if ever. The Constitution is the core of the governance of the Island state with the nation sitting at 5th for its use of democracy and having one of the most stable governments in the world (The Fund for Peace 2013). The climate in New Zealand can only be described in relationship to the region for which the discussion is being made. Temperatures can range from 10 degrees Celsius in the south to 16 degrees Celsius in the north. The climate is mild for the most part, but remote regions can have either very warm or very cold temperatures, extremes that are dependent upon the location (The New Zealand Encyclopaedia, 2013). The sun shines in the Auckland and Wellington regions on average 2000 hours per year. Cooler climates are found in the south with only having about 1400-1600 hours per year, with the northern parts of the region having the sunniest number of days at 2400-2500 per year (Corrigan 2012, p. 41). The OECD (2009, p. 71) developed a report on the status of New Zealand, including information on the infrastructure. According to the report, the development of roads, of stable electricity, and of communications has increased rapidly in the last decade. The appointment of a minister to focus on infrastructure has indicated recognition of the need for attention to the facilities within the nation. In addition, a problem was recognized when the 2008 worldwide economic downturn began as a lack of insurance on banking deposits caused financial difficulties as the worldwide banking structures began to fail (OECD 2009, p. 73). English is the primary language in New Zealand, but prior to colonization the Maori language was the primary language. In 1987 the Maori language was recognized as an official language (Bell, Harlow, and Starks 2006, p. 13). The Maori were the first immigrants to the land of New Zealand, travelling in canoes from Tahiti about 1500 years ago. The Maori are now only about 15% of the population with about 500,000 in the population. There are a great many tribes of the Maori, but traditional Maori life is not widely practiced and most have integrated into the post-colonial modern world (Theunissen 2003, p. 5). Like most regions of the world that were oppressed under colonialism, the Maori were discouraged from speaking their own language and to integrate in servitude positions under the British domination. Children in schools under British colonialism were punished severely for speaking ...Download file to see next pagesRead More
Share:
Tags
Cite this document
(“Emerging Tourism Markets and destinations ( chosen destination New Coursework”, n.d.)
Retrieved de https://studentshare.org/tourism/1466392-emerging-tourism-markets-and-destinations-chosen
(Emerging Tourism Markets and Destinations ( Chosen Destination New Coursework)
https://studentshare.org/tourism/1466392-emerging-tourism-markets-and-destinations-chosen.
“Emerging Tourism Markets and Destinations ( Chosen Destination New Coursework”, n.d. https://studentshare.org/tourism/1466392-emerging-tourism-markets-and-destinations-chosen.
Comments (0)
Click to create a comment or rate a document

... A Brave New World 26 February Introduction Man has always wondered since time immemorial about his ultimate place in the big universe. He had attempted to find meaning in this scheme of things without much success. A key repeated theme is seeming failure to find that true meaning that will justify his existence. What usually happens is that the more Man goes deeper into the search for ultimate meaning, the more he finds nothing. This is confounding, to say the least, and goes to show how useless the search could be. Many people had been doing this search several times and came up with nothing. Out of this seeming hopelessness and uselessness came the philosophical idea of the absurd – that Mans search for individual meaning is bound...
8 Pages(2000 words)Term Paper
sponsored ads
Save Your Time for More Important Things
Let us write or edit the coursework on your topic "Emerging Tourism Markets and destinations ( chosen destination New Zeeland)" with a personal 20% discount.
GRAB THE BEST PAPER

Let us find you another Coursework on topic Emerging Tourism Markets and destinations ( chosen destination New Zeeland) for FREE!