Comments (0)
Add to wishlistDelete from wishlist
Cite this document
Summary
The paper "I Stand Here Ironing by Tillie Olsen" discusses that fact that this story is about change than anything else is important to understand. The author wants to convey the message that no one can live a life of deprivation forever and everyone tries to do something to change their situation…
Download full paperFile format: .doc, available for editing
HIDE THIS PAPERGRAB THE BEST PAPER91.2% of users find it useful 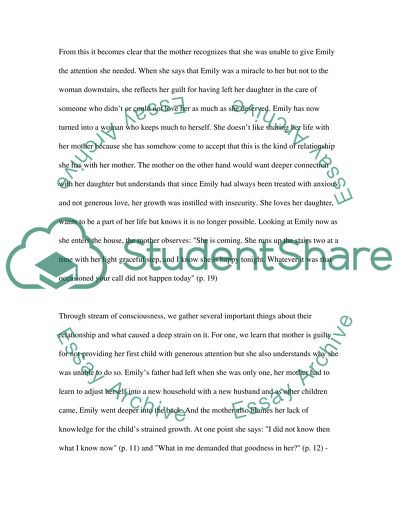 Extract of sample "I Stand Here Ironing by Tillie Olsen"

Download file to see previous pages The process begins when she receives a note from the school counselor saying: "She's a youngster who needs help and whom I'm deeply interested in helping." Emily was a bright child as the mother recalls: "She was a beautiful baby. She blew shining bubbles of sound. She loved motion, loved the light, loved color, and music and textures. She would lie on the floor in her blue overalls patting the surface so hard in ecstasy her hands and feet would blur. She was a miracle to me, but when she was eight months old I had to leave her daytimes with the woman downstairs to whom she was no miracle at all, for I worked or looked for work and for Emily's father who "could no longer endure" (he wrote in his good-bye note) "sharing want with us." (p. 9)
From this, it becomes clear that the mother recognizes that she was unable to give Emily the attention she needed. When she says that Emily was a miracle to her but not to the woman downstairs, she reflects her guilt for having left her daughter in the care of someone who didn't or could not love her as much as she deserved. Emily has now turned into a woman who keeps much to herself. She doesn't like sharing her life with her mother because she has somehow come to accept that this is the kind of relationship she has with her mother. The mother, on the other hand, would want deeper connection with her daughter but understands that since Emily had always been treated with anxious and not generous love, her growth was instilled with insecurity. She loves her daughter, wants to be a part of her life but knows it is no longer possible. Looking at Emily now as she enters the house, the mother observes: "She is coming. She runs up the stairs two at a time with her light graceful step, and I know she is happy tonight. Whatever it was that occasioned your call did not happen today" (p. 19)
Through a stream of consciousness, we gather several important things about their relationship and what caused a deep strain on it. For one, we learn that the mother is guilty of not providing her first child with generous attention but she also understands why she was unable to do so. Emily's father had left when she was only one, her mother had to learn to adjust herself into a new household with a new husband and as other children came, Emily went deeper into the back. And the mother also blames her lack of knowledge for the child's strained growth. At one point she says: "I did not know then what I know now" (p. 11) and "What in me demanded that goodness in her" (p. 12) - meaning she is using her present knowledge to assess and understand her past behavior and that of her daughter's as well.
Mother is the central character in the story and Emily is what she constructs for us. It is through her consciousness that we construct Emily or have an image of her. She is a nineteen-year-old who is not close to her mother at all. The mother was approached by a school counselor as they felt that Emily was disturbed and needed help but while the mother would love to help, she is basically clueless. Clueless not because she doesn't know what is causing her present behavior but because she has no idea as to how it can be effectively influenced. "You think because I am her mother I have a key, or that in some way you could use me as a key She has lived for nineteen years. There is all that life that has happened outside of me, beyond me" (p. 9). ...Download file to see next pagesRead More
Share:
Tags
Cite this document
(I stand here ironing Book Report/Review Example | Topics and Well Written Essays - 1750 words, n.d.)
I stand here ironing Book Report/Review Example | Topics and Well Written Essays - 1750 words. https://studentshare.org/sociology/1505067-i-stand-here-ironing
(I Stand Here Ironing Book Report/Review Example | Topics and Well Written Essays - 1750 Words)
I Stand Here Ironing Book Report/Review Example | Topics and Well Written Essays - 1750 Words. https://studentshare.org/sociology/1505067-i-stand-here-ironing.
“I Stand Here Ironing Book Report/Review Example | Topics and Well Written Essays - 1750 Words”. https://studentshare.org/sociology/1505067-i-stand-here-ironing.
Comments (0)
Click to create a comment or rate a document

CHECK THESE SAMPLES OF I Stand Here Ironing by Tillie Olsen

I Have a Dream: A Critical Discourse Analysis

Ptolemy I Soter and His Relationship with Egypt

11 Pages(2750 words)Assignment
sponsored ads
Save Your Time for More Important Things
Let us write or edit the book report/review on your topic "I Stand Here Ironing by Tillie Olsen" with a personal 20% discount.
GRAB THE BEST PAPER

Let us find you another Book Report/Review on topic I Stand Here Ironing by Tillie Olsen for FREE!