Comments (0)
Add to wishlistDelete from wishlist
Cite this document
Summary
Political economy can be defined as a social science that deals with how institutions develop in different social and economic systems such as capitalism, socialism and communism. …
Download full paperFile format: .doc, available for editing
HIDE THIS PAPERGRAB THE BEST PAPER96.3% of users find it useful 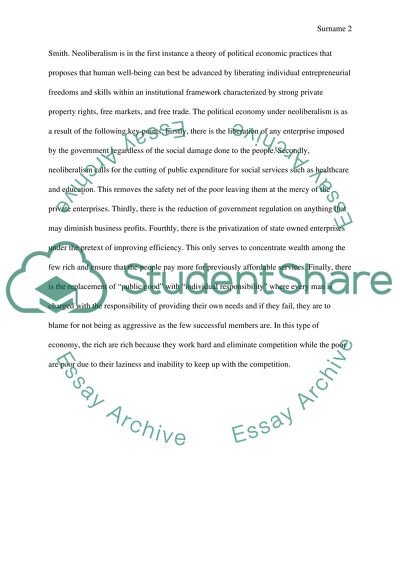 Blog assignment: Political economy theories Political economy can be defined as a social science that deals withhow institutions develop in different social and economic systems such as capitalism, socialism and communism. It is the science of wealth, which deals with efforts made by man to supply wants and satisfy desires. This piece will focus on two key theories put across by various economists and demonstrate how they have been used to explain the impact of political ideologies on economic relations such as buying and selling od goods, flow of investment, wealth or poverty of regions and ways in which economic power influences political relationships among states. The theories used in this analysis will be the Marxist and Neoliberalism.
Marxism is a system of economic, social, and political philosophy based on ideas that view social change in terms of economic factors. This theory asserts that for human beings to survive they must produce and reproduce the materials necessary for life. As a result, the societies are therefore governed by forces of production. Karl Marx believed that although capitalism develops the productive powers of human societies to historically unprecedented heights, it does so in ways, which are also disabling, exploitative, and undemocratic. In order to change this unjust order in the society Marx advocated for a revolution which would see the distribution of wealth from the few owners of production to all members of the society.
“Neo” refers to a new kind of liberalization carved out by an elite group of capitalists from the old liberal school of economics that belonged to famous economists such as Adam Smith. Neoliberalism is in the first instance a theory of political economic practices that proposes that human well-being can best be advanced by liberating individual entrepreneurial freedoms and skills within an institutional framework characterized by strong private property rights, free markets, and free trade. The political economy under neoliberalism is as a result of the following key points. Firstly, there is the liberation of any enterprise imposed by the government regardless of the social damage done to the people. Secondly, neoliberalism calls for the cutting of public expenditure for social services such as healthcare and education. This removes the safety net of the poor leaving them at the mercy of the private enterprises. Thirdly, there is the reduction of government regulation on anything that may diminish business profits. Fourthly, there is the privatization of state owned enterprises under the pretext of improving efficiency. This only serves to concentrate wealth among the few rich and ensure that the people pay more for previously affordable services. Finally, there is the replacement of “public good” with “individual responsibility” where every man is charged with the responsibility of providing their own needs and if they fail, they are to blame for not being as aggressive as the few successful members are. In this type of economy, the rich are rich because they work hard and eliminate competition while the poor are poor due to their laziness and inability to keep up with the competition.
Works Cited
Boucher, D. Political Theories of international Relations. Oxford: Oxford University Press, 1998.
Eatwell, Milgate, Newman. Palgrave Dictionary of Economics. Palgrave Macmillan, 1987.
Gills, B. K. Historical Materialism and International Relations Theory, Millennium: Journal of International Studies, Vol.16, No 2. 1987, pp. 265-272.
Harvey, David. A Brief History of Neoliberalism. Oxford University Press, 2005. Read More
Share:
Tags
Cite this document
(“Political Economy Theories Assignment Example | Topics and Well Written Essays - 500 words”, n.d.)
Political Economy Theories Assignment Example | Topics and Well Written Essays - 500 words. Retrieved from https://studentshare.org/social-science/1674935-political-economy-theories

..., it must be noted that the US has had a major impact on world economies with respect to their industrialization as well and this answer aims at identifying how these various economic transformations taking place in the US and elsewhere were ratified and interpreted by various scholars and thinkers, with respect to a political state. The Second World War had a great impact on almost all the world economies as it led to greater spending and a need for more and more arms and ammunition. All of this led to the building of more and more industries, which made countries around the world tap and realise their industrial potential. The 1950s and 60s were a time when most...
9 Pages(2250 words)Essay

...Your first and sur Your Due Question Democracy is the power to govern a in the form of majorityvotes. It allows people to make their choices for their representatives or direct vote (direct democracy). How it conforms to free market is a debate that highlights many aspects and pitfalls in this state governance out of which ethnic disparity is the major issue. Ignoring this major drawback would be a nave opinion because as per marketing orientation of ethics, people are irrational. Following will be arguments that support the fallacy of democracy and free market economy co-independence. Free market economy suggests that the power of demand and supply govern the prices and purchasing power of people. This...
4 Pages(1000 words)Essay

...Contemporary Theories for Political Economy Question In the era posterior to Marxist and the liberals, the debate has moved on to the new territory concerns the appropriate institutional framework, within the parameters of which a market may operate. Essences and markets Aristotle uses both the general essence/accident distinction and the more particular teleological account of essences to describe the market as a social institution (Marx & Fowkes, 347-574). To characterise those properties of the market which it possesses in virtue of the kind of economic institution it is, as against accidental features of this or that market, Aristotle starts by considering the features of the market...
8 Pages(2000 words)Essay

...Q Frieden’s attempt to explain three decades between 1970-1990s is based on the continuous evolution of the global capitalist system that took place specially after the end of World War II. Friden’s analysis of this period is mostly based on arguing for the increased integration of the economies of the world and emergence of globalized world which re-shaped the economic policy making in many countries. Frieden also describe the changes that took place in East Asian countries and the successive explosion of unique economic phenomenon of international integration which allowed massive flow of factors of production across the borders. Resultantly, this era also witnessed a transition from traditional culture to Western...
7 Pages(1750 words)Essay

...Fukuyama and the End of History In 1989, Francis Fukuyama, who had served as the deputy director of the US Departments Policy Planning Staff, published an essay titled The End of History. Three years later, Fukuyama expanded upon his essay and came out with a book The End of History and the Last Man. The years 1989 to 1990 saw the end of the Cold War. According to Fukuyama, the end of Cold War was the end of history as the human civilization was unanimously converging on a single organization, i.e. the Western liberal democracy. The core of the argument that Fukuyama presented in his writings was that the shift of power and the resultant emergence of liberal democracy stifles further growth and advancement in human...
4 Pages(1000 words)Essay

... Economics of Racism and Gender Racism against the blacks and other people of color is a dominant feature ofthe American society. Wage gaps between workers from different racial groups and between male and females remain existent in the job market. This paper discusses the political economy theories that explain the cause of wage gaps between racial groups and between genders. THE MARXIST THEORY In this theory, Karl Marx discusses capitalism economic system which has two main classes. These are the capitalists who own the means of production and the majority working class who offer their labor power in return for wages. The capitalists maximize their profits by minimizing employee wages (Albelda et al. 140). Workers can advocate...
1 Pages(250 words)Book Report/Review

... Question One Totalitarianism This is a political system whose ity is limitless. It’s guided by a specific ideology but has an aim to regulate most if not all aspects of private and public life. controlling public aspects encompasses controlling the economy as this cripples all other public sectors. Controlling private aspects is achieved through regulating freedom of speech and suppressing the mass media. These coupled with terror and propaganda helps keep totalitarian regimes in power for long. Authoritarianism This form of government people are supposed to unquestioningly submit to authority as it is opposed to democracy and individualism. Power... was the ...
9 Pages(2250 words)Assignment
sponsored ads
Save Your Time for More Important Things
Let us write or edit the assignment on your topic "Political Economy Theories" with a personal 20% discount.
GRAB THE BEST PAPER

Let us find you another Assignment on topic Political Economy Theories for FREE!