Comments (0)
Add to wishlistDelete from wishlist
Cite this document
Summary
For example, the Hindu culture believes in many gods who are represented in different forms or idles. In the Christian and Judaism culture, God is as unseen and cannot be explained or represented…
Download full paperFile format: .doc, available for editing
HIDE THIS PAPERGRAB THE BEST PAPER94.3% of users find it useful 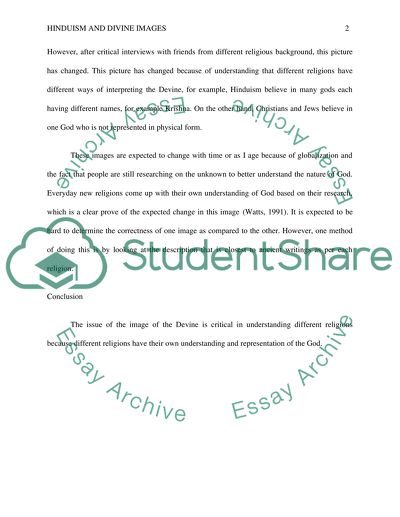 Hinduism and Divine Images affiliation Hinduism and Divine Images Different religions picture God in different ways depending on their own beliefs. For example, the Hindu culture believes in many gods who are represented in different forms or idles. In the Christian and Judaism culture, God is as unseen and cannot be explained or represented physically, he is believed to a supernatural being (Adams, 1997).
Body
When I was a child, the picture of the Devine was that there was only one God who had the characteristic of being powerful, pure, patient, the creator of every being, and forgiving. However, after critical interviews with friends from different religious background, this picture has changed. This picture has changed because of understanding that different religions have different ways of interpreting the Devine, for example, Hinduism believe in many gods each having different names, for example Krishna. On the other hand, Christians and Jews believe in one God who is not represented in physical form.
These images are expected to change with time or as I age because of globalization and the fact that people are still researching on the unknown to better understand the nature of God. Everyday new religions come up with their own understanding of God based on their research, which is a clear prove of the expected change in this image (Watts, 1991). It is expected to be hard to determine the correctness of one image as compared to the other. However, one method of doing this is by looking at the description that is closest to ancient writings as per each religion.
Conclusion
The issue of the image of the Devine is critical in understanding different religions because different religions have their own understanding and representation of the God.

CHECK THESE SAMPLES OF Hinduism and Divine Images

..., which will lead to unfortunate events and vice versa for good deeds. It is also important in the concept of reincarnation, as how good your karma is will determine what an individual is reincarnated as. This is especially important because a person must have very good karma in order to escape the cycle of reincarnation in order to achieve a higher state of enlightenment known as moksha. An avatar is a manifestation of a Hindu deity on Earth. Each sect of Hinduism has a different view regarding these types of manifestations. The manifestation does not have to occur solely as a human, but can be in the form of an animal or any other sort of creature. They appear as a source of divine influence and often...
2 Pages(500 words)Essay

...solemnity and reverence besides customary treatment. To the awareness of majority including non-believers, the Hindu approach of seeking spiritual enlightenment such as the essence found in ‘karma’ and ‘samsara’ or the continuum manifested in the cycle of action, reaction, birth, death, and rebirth meditatively educates and refreshes an individual. Its immense signification of clean living, prayerfulness, denying oneself, and treating creatures lower than human beings as sacred such as animals are has altogether made Hinduism substantial in advancing common intellects out of typical weakness into a level past human nature where a state of purity and divinity is attained in pursuit of genuine fulfilment...
1 Pages(250 words)Essay

.... The conducts of devotees are dependent on the way they obey rules and regulations of the rituals (Fuller 62-65). One of the most interesting rituals is the Puja which is regarded by Hindus as a way of honoring deities through various ways. Some of the ways of displaying devotion to gods are via prayers and hymns. Puja is considered worldwide by Hindus as a means of making spiritual connection with gods where some images and symbols are used as a connection between the devotee and the gods (Dasa n.p.). The images, objects and the symbols used in Hinduism for puja’s purposes are believed to contain some divinity powers which are essential in worshipping. Although the...
6 Pages(1500 words)Essay

...The Belief in Reincarnation Hindus believe in many things, just like any other religion. While other religions share some of the Hinduism beliefs, others are unique to Hindu religion. Founded by an Indian and mostly practiced by Indians, some of the Hinduism beliefs have their origin in the Indian culture. The religion draws other beliefs from the religion’s philosophies and concepts. One of these beliefs is the belief in reincarnation. According to this philosophical concept, Hindus belief that after the biological death of a person, the soul or the spirit takes a different form, beginning a new life in a new form, that could be another human being, animal or spiritual being (Fowler 10). However, this...
3 Pages(750 words)Essay

..., or gods, or perhaps even just a set of ideas that show how the universe is run. Yoga also enables a physical fitness that will keep people healthy. It is only through the health of the mind and the body that a Hindu can truly worship. Those who practice yoga are often involved deeply in the Tantric part of Hinduism. They believe that the only way of truly knowing the divine is for them to see an image of the deity and to almost become part of that deity. They often see this in the form of a sexual union, and this is often controversial among many Hindus. Explain your understanding of reincarnation Reincarnation is a very difficult concept. Within Hinduism, as within...
10 Pages(2500 words)Essay

...Hinduism Introduction Hinduism is the strongest religious tradition of South Asia. It is the third largest religion in the world, and is considered to be the oldest living major religion or tradition. While it is more often called a religion, its structure is such that Hinduism is considered more of a way of life than an actual religious or spiritual belief system. This can be seen in the phrase Sanātana Dharma, which, in Sanskrit, is translated to “the eternal law (Bowker, 2000).” Hinduism also includes a variety of yoga and meditation traditions, as well as morality based on the concepts of karma and reincarnation. Within Hinduism are a variety of...
9 Pages(2250 words)Essay

...of migration took place in the 1960s and involved educated and skilled immigrants and their extended families. (Ember et al, 2005 p 445) Hinduism as a form of religion is comprised of the history of the Indians and thus there is no any belief or practice of the Indians that can be rejected or negated. The Hindu subscribe to the idea no old ideas or practices can be eliminated or transcended .The old ideas are practiced together with the more recent ones. Among the Hindu, divinity is respected and worshipped in its manifestation without any prejudice. The act of doctrine tolerance is ranked high among the Hindu when compared to other major religion. Therefore, a Hindu may worship non-Hindu gods and still...
6 Pages(1500 words)Essay

...s 2 May, The religious ideology of Hinduism Every individual has his own perspective and approachon religious doctrines and the belief in the presence of some divine authoritative power that allows the universe and its inhabitants to exist. Religion is often classified to be linked with faith or a divinely planned belief system presented to us through scriptures and Prophets or Saints. I believe it is a person’s own choice, whether he/she wants religion to be restricted to observing and performing holy rituals whenever due or make it a habit to encircle every aspect of life with that particular belief system. As for me, it is more than that, it should be a way of life for everyone...
5 Pages(1250 words)Essay

1 Pages(250 words)Essay
sponsored ads
Save Your Time for More Important Things
Let us write or edit the assignment on your topic "Hinduism and Divine Images" with a personal 20% discount.
GRAB THE BEST PAPER

Let us find you another Assignment on topic Hinduism and Divine Images for FREE!