Comments (0)
Add to wishlist Delete from wishlist
Cite this document
Summary
This paper "Summary of Leviticus 25,26, Numbers 9, Deuteronomy 6" focuses on these verses that outline the various rules that God commands His people to observe. They insist on the obedience of humanity as obedience leads to long life, while disobedience leads to punishment as discussed below. …
Download full paper File format: .doc, available for editing
HIDE THIS PAPERGRAB THE BEST PAPER91.9% of users find it useful 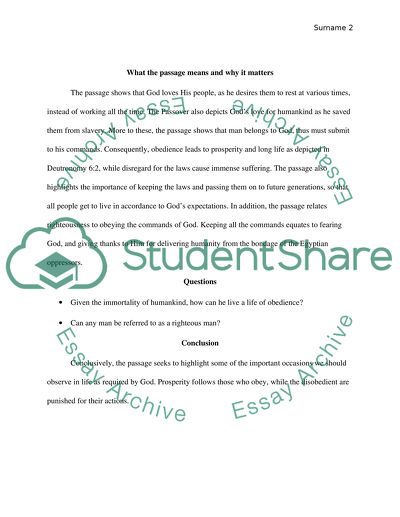 ﻿Summary of Leviticus 25, 26, Numbers 9, Deuteronomy 6
Introduction
These verses outline the various rules that God commands His people to observe. They insist on obedience of humanity as obedience leads to long life, while disobedience leads to punishment as discussed below.
Summary
Leviticus 25 highlights the Sabbath year, which falls on every seventh year, and the year of Jubilee, which occurs on the fiftieth year. God requests for obedience in Leviticus 26, while Numbers 9 speaks of the Passover, which consists of eating the lamb together with unleavened bread and bitter herbs. Deutronomy 6 insists on people obeying the commands of the Lord, which involves loving God with all of one’s heart.
Importance of the passage
This passage is important as it gives the significant celebrations that people ought to observe as commanded by God. The Sabbath year, for example, marks a year of rest as people should not sow or reap in that year, while the year of Jubilee depicts a time of liberty for the children of God. The Passover helps in reminding people that God saved them from the Egyptians, hence have a responsibility of obeying Him and loving Him as their only God.
What the passage means and why it matters
The passage shows that God loves His people, as he desires them to rest at various times, instead of working all the time. The Passover also depicts God’s love for humankind as he saved them from slavery. More to these, the passage shows that man belongs to God, thus must submit to his commands. Consequently, obedience leads to prosperity and long life as depicted in Deutronomy 6:2, while disregard for the laws cause immense suffering. The passage also highlights the importance of keeping the laws and passing them on to future generations, so that all people get to live in accordance to God’s expectations. In addition, the passage relates righteousness to obeying the commands of God. Keeping all the commands equates to fearing God, and giving thanks to Him for delivering humanity from the bondage of the Egyptian oppressors.
Questions
Given the immortality of humankind, how can he live a life of obedience?
Can any man be referred to as a righteous man?
Conclusion
Conclusively, the passage seeks to highlight some of the important occasions we should observe in life as required by God. Prosperity follows those who obey, while the disobedient are punished for their actions.
Works Cited
The English Standard Version Bible. New York: Oxford University Press, 2009. Print. Read More
Share:
Tags
Cite this document
(“Summary of Leviticus 25,26, Numbers 9, Deuteronomy 6 Assignment”, n.d.)
Summary of Leviticus 25,26, Numbers 9, Deuteronomy 6 Assignment. Retrieved from https://studentshare.org/religion-and-theology/1646540-summary-of-leviticus-2526-numbers-9-deuteronomy-6

CHECK THESE SAMPLES OF Summary of Leviticus 25,26, Numbers 9, Deuteronomy 6

..., memory and motor skills of the students. In this way, chapter 8 has focused on the benefits of theme-based learning for the overall development of students. It has also explained how theme-based learning can help in developing the vocabulary of students and hence, enhance not only their language learning but also their social and communication skills. Summary of chapter 9 Chapter 9 focuses on the issue of choice of language while teaching the foreign language in class. It is understood that using the target foreign language during the foreign language class is more practical approach as it increases exposure to foreign language. The reason behind this understanding is that the more the students hear the language, the more they will learn...
6 Pages (1500 words) Essay

This has been the subject of controversy over years. To the proponents of documentary hypothesis, the book of Leviticus, which is also one of the Pentateuch books was not written by one person, Moses, but instead was a product of various others. Of course, there exists archeological and historical fabrications and evidence which explicitly supports this line of thought. While the debate about documentary evidence continues, there is also compelling evidence to believe the former. It is the intent of this paper to explore arguments against documentary evidence and to show Moses’ authenticity and single handedness in drafting Leviticus. The Hebrew derives the title of Leviticus from the initial word in it Wayyiqra’, which when tran...
7 Pages (1750 words) Research Paper

... a book of history, as Genesis, Exodus, and Numbers are, as it is a book of law. In contrast to Leviticus, however, Moses addressed Deuteronomy to all the Israelites more than to the priests and Levites"6. The book of Deuteronomy places the emphasis strikingly on knowledge, teaching, and instruction. The words "teach," "teaching," and "taught" occur much more often in Deuteronomy than in the first four books of the Pentateuch7. Historical Background of the Text An understanding of the concerned text is only possible with the knowledge of the context surrounding it. Verse 32 challenges the Israelites, or anyone who might be reading the text, as we are today, to think and present any god who is as great as this God who is described...
6 Pages (1500 words) Book Report/Review

Among these invasions were; the military attacks on Poland by the Germans, the attack of China by the Japanese military. These invasions were majorly as a result of the undesirable decisions that were made by dictatorial leadership in Japan and Germany.
For a period of two years, the United States took a neutral position in the ongoing global military conflicts that majorly occurred among Japan, Italy as well as the Germans. During this period the government of the United States of America under the guidance of the then President Franklin Roosevelt signed a program that would guide it to supply military weapons to the Free France, Britain, Russia (Soviet Union) and Italy which were its allies (Brinkley 692).
The program wa...
4 Pages (1000 words) Essay

... BUSN Chapter 6 Summary Introduction The sixth chapter of the book BUSN by written by the Marcella Kelly and Jim McGowan explores the various forms of businesses and also looks at the process of selecting the most suitable one that will fit an individual’s or organizational aspirations. There are four types of business formations. These are partnerships, sole proprietorship, limited liability corporations and corporations. All these formations are prevalent in the modern business world and the choice to adopt one depends on a host of factors. These include things like capital, target market, labor amongst others. Sole proprietorship is a kind of business formation where the enterprise is under the ownership of one individual. Some...
1 Pages (250 words) Essay

...Chapter Nine Summary Chapter nine introduces the concept of dualism, which is the belief that there are two principles of reality - mind and matter,or what is invisible as opposed to what is visible, and unchanging in nature to the always changing. Plato contends that Forms, or conceptual thoughts, are wholly real as they are independent of outside influence and were not caused by anything else. As such, they are perpetually unchanging. The author uses the example of the existence of cobra snakes, stating that conceptual thoughts about cobras would mean that cobras are not physical objects, but matters of the mind. This notion takes on an absurd twist when the author states that cobras would then not exist if someone were not thinking...
2 Pages (500 words) Essay

...Data centre Data centre A data centre refers to a centralized repository, whether virtual or physical that is used for data storage, dissemination as well as management. In the data centre, information is usually organized around a particular subject. A data centre is normally used in housing computer systems which are utilized in data storage and transmission (Banks, 2005). This study focuses on a data centre in a fictitious company by the name Sharp Investigators Company. Due to the high level of data that the organization receives to its systems, it needs to develop a well integrated data centre from where information and communication flows. It is worth noting that data and information that is transmitted across departments... centre Data ...
2 Pages (500 words) Assignment

... that the more time the name of the Father was exalted or spoken within a prayer, the higher the possibility that God would actually receive the supplication and issue a favorable response. This is yet another warning potentially being issued by Jesus to refrain from using the name of God to be heard. Jesus is teaching us that God is our Father and should be spoken to as such in our prayers. In a future passage (Matthew 26:39-44), Jesus actually questions his disciples who actually calls upon a father or a friend by continuously repeating him. The question is rhetorical and is meant to remind us to use the Lord’s Prayer as a model in this regard (O’Collins 360). Structure The Lord’s Prayer forms that basis for Matthew 6:9-13...
11 Pages (2750 words) Research Paper

...Chapter 25 & 26 Chapter 25 & 26 Chapter 25 Chapter 25 focused on the importance of auditing and how auditors work. The most interesting part of the chapter was the clarification of the idea that auditors are not there to conduct investigations and report organizations that are indulging in criminal activities (Arens, 2014). The chapter made me realized that one of the most important aspects of auditing is to help companies solve its financial issues. It was even interesting to learn that those auditors who work without the influence of top level management are more beneficial for the company. Chapter 26 The most interesting information I gained regarding assurance services through this chapter was that assurance services help managers...
1 Pages (250 words) Assignment
sponsored ads
Save Your Time for More Important Things
Let us write or edit the assignment on your topic "Summary of Leviticus 25,26, Numbers 9, Deuteronomy 6" with a personal 20% discount.
GRAB THE BEST PAPER

Let us find you another Assignment on topic Summary of Leviticus 25,26, Numbers 9, Deuteronomy 6 for FREE!