The Role of the Bible in Regards to Ethics - Assignment Example

Comments (0)
Add to wishlistDelete from wishlist
Cite this document
Summary
The paper "The Role of the Bible in Regards to Ethics" describes that the Bible is the word of the Lord and it speaks to us on different aspects of life that we face on daily basis. The Bible gives us answers to all the dilemmas that we are faced with each day…
Download full paperFile format: .doc, available for editing
HIDE THIS PAPERGRAB THE BEST PAPER98.6% of users find it useful 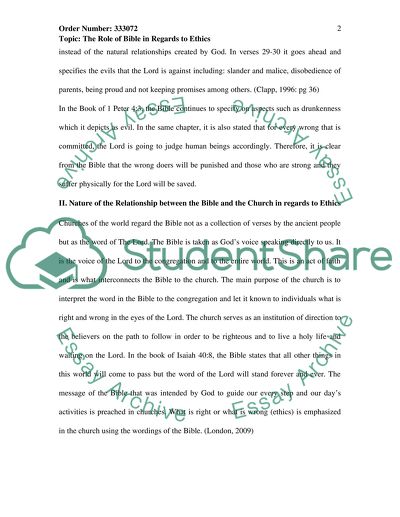 Download file to see previous pages The Bible gives Christians the answers to different morality aspects that often bring up arguments and disagreements. Such matters include abortion, immorality, drug abuse, homosexuality, alcoholism, divorce and the family among other aspects of life that often bring up dilemmas. (London, 2009)
The Bible talks about morality and ethics in specific and general terms. In the Book of Mark 7:20-23, the Bible specifies that it is what comes from inside of Christians that causes them to sin. The heart directs us to steal to kill and to rob; to be jealous to be immoral and to commit any form of sin against the Lord. The verse mentions specifically the acts that are known to be immoral and unethical in accordance to the Bible.
In Romans 1:25-32 the Bible goes ahead into specifications that when men sin against the Lord and are involved in worshipping the creations of the Lord and not God himself; it results into acts such as homosexuality where men have a strong passion for each other instead of the natural relationships created by God. In verses 29-30 it goes ahead and specifies the evils that the Lord is against including slander and malice, disobedience of parents, being proud and not keeping promises among others. (Clapp, 1996: pg 36)
In the Book of 1 Peter 4:3, the Bible continues to specify on aspects such as drunkenness which it depicts as evil. In the same chapter, it is also stated that for every wrong that is committed, the Lord is going to judge human beings accordingly. Therefore, it is clear from the Bible that the wrongdoers will be punished and those who are strong and they suffer physically for the Lord will be saved.
II. Nature of the Relationship between the Bible and the Church in regards to Ethics
Churches of the world regard the Bible not as a collection of verses by the ancient people but as the word of The Lord. The Bible is taken as God's voice speaking directly to us. It is the voice of the Lord to the congregation and to the entire world. This is an act of faith and is what interconnects the Bible to the church. The main purpose of the church is to interpret the word in the Bible to the congregation and let it known to individuals what is right and wrong in the eyes of the Lord. The church serves as an institution of direction to the believers on the path to follow in order to be righteous and to live a holy life and waiting on the Lord. In the book of Isaiah 40:8, the Bible states that all other things in this world will come to pass but the word of the Lord will stand forever and ever. The message of the Bible that was intended by God to guide our every step and our day's activities is preached in churches. What is right or what is wrong (ethics) is emphasized in the church using the wordings of the Bible. (London, 2009)
In the Book of Nehemiah 8:1-16, the people of Israel are gathered in the Watergate to listen to the word that the Lord had given to Moses for them. Ezra the priest at that time read the scripture out loud to the people and they listened attentively to every word. They stood up in respect of the word and they bowed down to the Lord and worshipped Him in song and Praise.  ...Download file to see next pagesRead More
Share:
Tags
Cite this document
(The Role the Bible in Regards to Ethics Assignment, n.d.)
The Role the Bible in Regards to Ethics Assignment. https://studentshare.org/religion-and-theology/1502627-the-role-the-bible-in-regards-to-ethics
(The Role the Bible in Regards to Ethics Assignment)
The Role the Bible in Regards to Ethics Assignment. https://studentshare.org/religion-and-theology/1502627-the-role-the-bible-in-regards-to-ethics.
“The Role the Bible in Regards to Ethics Assignment”. https://studentshare.org/religion-and-theology/1502627-the-role-the-bible-in-regards-to-ethics.
Comments (0)
Click to create a comment or rate a document

In regards to gender

9 Pages(2250 words)Essay
sponsored ads
Save Your Time for More Important Things
Let us write or edit the assignment on your topic "The Role of the Bible in Regards to Ethics" with a personal 20% discount.
GRAB THE BEST PAPER

Let us find you another Assignment on topic The Role of the Bible in Regards to Ethics for FREE!