Comments (0)
Add to wishlist Delete from wishlist
Cite this document
Summary
Sometimes transliterated as Tenrikyo, when considered in comparison with longer established religions, Tenriko is both one of the world’s newer religions and one with fewer members than many…
Download full paper File format: .doc, available for editing
HIDE THIS PAPERGRAB THE BEST PAPER91.5% of users find it useful 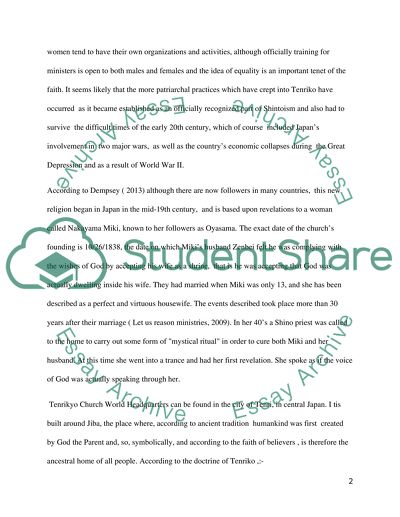 Extract of sample "Report on religious traditions Religion is Tenrikyo"

Download file to see previous pages Some would even argue that it is still not a separate religion, but remains a branch or sect of Shinto. The name comes from Tenri ,which means "heavenly wisdom" in Japanese, or “heavenly intelligence ( Morrigan 2013), and Kyo meaning "teaching, and so Tenriko is the teaching of heavenly wisdom as put forward by a benign deity. In its earliest days was mainly a grass roots peasant’s movement, with a strong shamanic element. It set out to meet the needs of ordinary people and also drew its support in the main from the lower stratas of Japanese society. Followers of Tenriko have faith in God, who is known by several names. This God has expressed his divine will through Nakayama Miki's part as the Shrine of God, together with other less important leaders who followed her, such as Honseki Izo Iburi, known when young for his carpentry skills, and who took over Tenriko leadership on the death of the foundress. Morrigan ( 2013) discusses the fact that, despite its female founder, Tenriko can be seen as sexist with leadership often being handed down the male line, father to son , whether or not the new leader is the most suitable , and clearly sees this as something that has gone wrong. Having researched lists of clerics Morrigan has found ( 2013) no sign of a church led by a woman , or any movement asking for the advocating for a greater inclusion of women in leadership in Tenriko. Similarly to the situation found in too many other faiths , and in particular in Christian churches , women tend to have their own organizations and activities, although officially training for ministers is open to both males and females and the idea of equality is an important tenet of the faith. It seems likely that the more patriarchal practices which have crept into Tenriko have occurred as it became established as an officially recognized part of Shintoism and also had to survive the difficult times of the early 20th century, which of course included Japan’s involvement in two major wars, as well as the country’s economic collapses during the Great Depression and as a result of World War II. According to Dempsey ( 2013) although there are now followers in many countries, this new religion began in Japan in the mid-19th century, and is based upon revelations to a woman called Nakayama Miki, known to her followers as Oyasama. The exact date of the church’s founding is 10/26/1838, the date on which Miki’s husband Zenbei felt he was complying with the wishes of God by accepting his wife as a shrine, that is he was accepting that God was actually dwelling inside his wife. They had married when Miki was only 13, and she has been described as a perfect and virtuous housewife. The events described took place more than 30 years after their marriage ( Let us reason ministries, 2009). In her 40’s a Shino priest was called to the home to carry out some form of "mystical ritual" in order to cure both Miki and her husband. At this time she went into a trance and had her first revelation. She spoke as if the voice of God was actually speaking through her. Tenrikyo Church World Headquarters can be found in the city of Tenri, in central Japan. I tis built around Jiba, the place where, according to ancient tradition humankind was first created by God the Parent and, so, symbolically, and according to the faith of believers , is therefore the ancestral home of all people. According to the doctrine of Tenriko ,:- In the beginning, the world was a muddy ocean. Tsukihi, God the Parent, finding this chaos unbearably tasteless, thought of creating human beings in order to see the Joyous Life and thus share in that joy.( Doctrine of Tenriko, ...Download file to see next pages Read More
Share:
Tags
Cite this document
(“Report on religious traditions Religion is Tenrikyo Research Paper”, n.d.)
Retrieved from https://studentshare.org/religion-and-theology/1496063-report-on-religious-traditions-religion-is

CHECK THESE SAMPLES OF Report on religious traditions Religion is Tenrikyo

Vandell and Crosnoe: Theories and Course Material in the Lifespan Development

How Low Can We Profitably Go

Case 1; What else can go wrong

The Importance of Managing Change in the Air Transport Industry

The Open Forms of Resistance

...Gas, Electri and Water Competition Thirty years ago, the consensus was that network utilities, such as gas, electri and water were essentially natural monopolies where competition was neither feasible nor desirable therefore they were regarded as public sector. However the consensus has changed.Competition is generally seen to be possible and desirable in such utilities therefore regulators now have all primary duties to promote competition. From a regulator`s point of view, it is crucial to have a clear view of what a competitive market is and what can be done, in the real world, to establish the conditions that will allow such a market to emerge. Traditional vs. New Approach The traditional regulation relied on static concept...
9 Pages (2250 words) Report

...). A few of the merits of cash flows are that they are based on income streams, they yield from investments, time value of money is taken into consideration and an analysis of profitability and risk is made (Solution Matrix, 2008). Net Present Value (NPV): NPV is a traditional method of valuation. Net present value is a method of comparing the current value of money to the future value of money. This method involves discounting of all future cash flows to present value this is then added up and compared to the outflow. If there are many projects that need to be compared, then the project with a positive NPV is preferred. The higher the NPV the more profitable it is to invest in a project. The NPV of a project can be derived using...
14 Pages (3500 words) Report

... enough time to indulge in their roles as parents, spouses, children, and care givers. However, the concept of work-life balance suffers on account of lack of formal and written policies and strategies, traditional management styles, and lack of expertise in handling flexible workforce (MacPherson, 2006). We have been hired as consultants to We Make Widgets, Inc. The company has presented us a problem that requires immediate remedial measures. Here is a brief summary of how we will help solve the problem. Chief Executive Officer (CEO) Maria Visionaria, the Chief Operating Officer (COO) Mujibar Delhi, and Chief Financial Controller (CFO) Wanda Sharp constitute the top echelon of the executive hierarchy...
6 Pages (1500 words) Report

... entirely different threats when he took over the helm from Reginald H. Jones in 1981. Back then, the main concerns were foreign competition and a bloated workforce which he had religiously trimmed down. The environment today is vastly different with globalization trends all over. The strategy at G.E. can be summed up in two words: technology and innovation. It is the two words that result in technical leadership which provides those high margins in the past and even today in some of the growth areas it had identified such as health care and renewable energy. G.E. had long left industries where there was price pressure and margins got thinner. By using technical leadership in industries it had chosen, it is possible to produce high-margin...
12 Pages (3000 words) Report
sponsored ads
Save Your Time for More Important Things
Let us write or edit the research paper on your topic "Report on religious traditions Religion is Tenrikyo" with a personal 20% discount.
GRAB THE BEST PAPER

Let us find you another Research Paper on topic Report on religious traditions Religion is Tenrikyo for FREE!